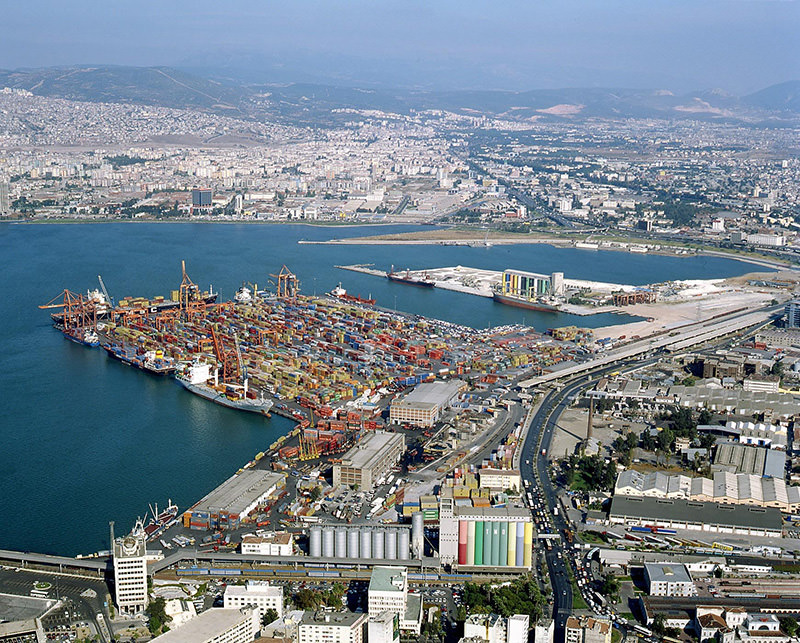 by Daily Sabah with AA
Nov 17, 2015 12:00 am
The tender to privatize the Port of Alsancak in the western province of İzmir, which handles the largest share of the country's exports, will be held in the first half of 2016.

According to a statement released from the Chamber of Shipping on Tuesday, modified zoning plans published in the Official Gazette will be announced by the İzmir Metropolitan and Konak district municipalities for a month. The new plan decreased the construction zone in the cruise port by 50,000 square-meters to 130,000 square meters, while the shopping mall project was replaced with small shops and hotels. For the freight port, new landfill areas were included in the plan.

Chamber of Shipping İzmir Branch Chairman, Yusuf Öztürk, said he is content with the new Port of Alsancak plans. "The reason İzmir exists is thanks to its port," he said. "Therefore, we support every step that removes uncertainty on the future of the Port of Alsancak. Despite dazzling competition conditions, the port continued to invest and serve; however, the competition became tougher. The ports that work effectively and invest continuously survive in the world. The Port of Alsancak cannot remain outside of the developments from the world and region. We think that ports should not remain under government control. Therefore, the ports should either be privatized or run by autonomous structures."

Öztürk also emphasized that two new wharfs included in the new plan will solve the docking problem of cruise ships.

The first initiative to privatize the port run by Turkish State Railways (TCDD) was made in 2006 and after four consecutive delays; the tender was concluded with Global-Hutchinson-Aegean Exporters' Union consortium offering $1.275 billion for the port. However, as the approval process exceeded two years, the consortium backed off from the tender due to global financial crisis.

This prolonged process led to the lack of renovations and investments at the port, which caused increasing costs for foreign trade firms due to extended waiting periods. As a result, the Ministry of Transportation launched a $300 million renovation, enlargement and dredging investment to increase the effectiveness of the port and additional staff was transferred from other privatized ports. When work is completed, the Port of Alsancak is expected to increase its container capacity from 900,000 TEU to three million TEU, fifth largest in Europe, while liquid and bulk goods handling in the port will be ended.

The location of the port is also a matter of debate in the last decade as the port is situated at the tip of the Gulf of Izmir and at the center of Turkey's third largest city. The port, with its increasing workload, stretches Izmir's road and rail transport capacities, has no surrounding area to enlarge its storage capacity and should be constantly dredged to avoid shallowing. Despite all investments, as the number and size of mega container ships are increasing due to current trends in freight shipping, critics of the port state that the port will be inadequate for such ships with its average 13 meter depth and lack of maneuver area. The bays of Nemrut and Çandarlı in northern parts of Izmir were proposed to replace the Port of Alsancak as the main port of the region.
Last Update: Nov 17, 2015 5:05 pm