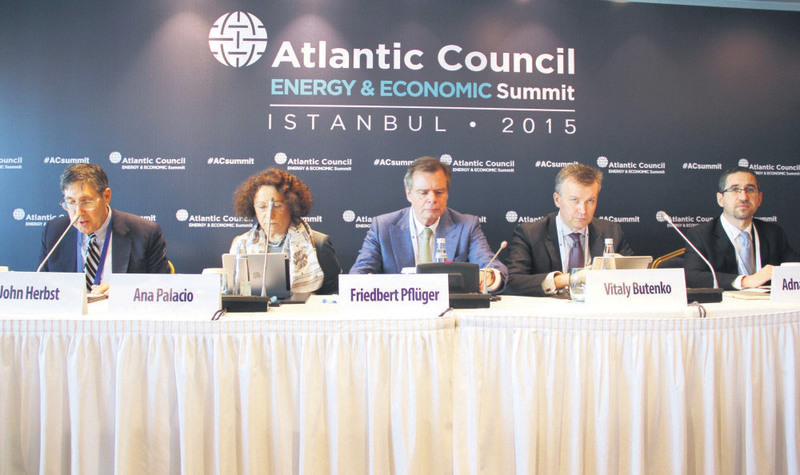 Right after the Group of 20 summit in Antalya, Turkey continues to host major international events on security and the economy with the commencement of the seventh annual Atlantic Council Energy and Economy Summit on Thursday in İstanbul, with the participation of President Recep Tayyip Erdoğan.

Frederick Kempe, president of the Atlantic Council, in his opening speech, said this year's summit concentrated on "much more than economy but security." Jon Huntsman, Chairman of Atlantic Council thanked President Erdoğan "for being a part of the summit," stressing the need to strengthen "shared values of prosperity" and cooperation between countries.

The prime minister-designate of Iraq, Haider al-Ibadi, and Hungarian President Kolinda Grabar-Kitarovic were also in attendance, along with many other political leaders. Ali Rıza Alaboyun, Turkish minister of energy and natural resources, Fatih Birol, executive director of the International Energy Agency, M. İlker Ayci, chairman of Turkish Airlines, Antony Blinken, U.S. deputy secretary of state and John Bass, U.S. ambassador to Turkey were among the key speakers present during discussions.

The two-day summit brought country leaders from the governmental, private and civil sectors together under the unifying theme of "Building Stability and Business Resilience in Volatile Times." With a primary focus on the deadly Paris attacks of last Friday, discussions at the AC summit centered on security and stability issues which have a direct impact on energy and economic development in many countries across the region; more notably Russia, Central Asia, the Caucasus, Europe and the Middle East. The instability and violence in the Middle East coupled with increasing terrorist attacks have severely affected global energy markets and causes bigger disruptions in oil supply.

The Washington-based think-tank aims to serve as an international platform for leading key players in the economic and energy sectors by strengthening transatlantic and international cooperation in the energy sector at a regional and global level. It also aims to address the political and economic challenges being faced in wider regions surrounding Turkey.

Iran's energy policy after the nuclear deal and the crisis in Syria are two important issues that are given special attention at the summit, where emphasis is placed on a regional response to obstacles and the security risks facing the energy sector. The summit also serves as the first international platform to bring U.S. and Iranian officials together. The Southern Gas Corridor (SGC), the Iraqi-Kurdistan energy outlook, falling gas prices, global energy suppliers from the Gulf countries and the European Project on Energy Integration are other topics to be discussed.

Daily Sabah attended pre-summit sessions held on Wednesday. During the sessions, the future of the world energy sector with regard to the geo-political concept, Russia's energy industry and energy ties with its neighbors as well as European and African energy security were discussed. As part of efforts to unify the European countries, pathways for building "a solid and stronger European Energy Union" have become a key focal point of the session. In the aftermath of the Paris attacks, growing security concerns in the EU led the European Commission to outline a legislative path towards the foundation of a "State of Energy Union" on Wednesday.

Regarding the geo-political challenges and increasing instability and security concerns, the commission aims to form a more well-functioning internal energy market in order to respond to external political and economic challenges more effectively.
Last Update: Nov 19, 2015 9:37 am
RELATED TOPICS