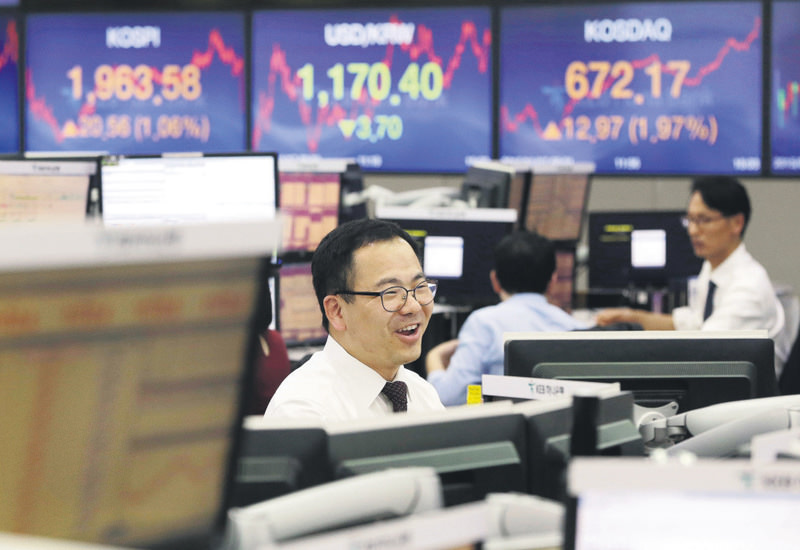 After months of talks the U.S. Federal Reserve has finally given a clear sign about its interest rate hike policy, which is likely to be partial. Stocks gained strength globally, while the dollar lost value

Stock markets around the world posted strong gains on Thursday as investors cheered a clearer policy stance from the U.S. Federal Reserve even though it looks like a rate hike next month looks to be well on the cards.

The news that the Fed looks to be clearing the decks for its first interest rate hike in more than nine years hasn't caused too much consternation in the markets. Quite the opposite in fact. Investors seem relieved that the "will they, won't they?" debate that's marked much of the past few months looks to be resolved. There's nothing quite like uncertainty to jolt investors. The minutes to October's rate-setting meeting, published Wednesday, showed that Fed officials believed that economic conditions needed to trigger the first interest rate hike in nearly a decade could "well be met" by their next meeting in December.

"Clearly the removal of the uncertainty around the U.S. rate hike is seen as being far more preferable to investors than keeping them at record lows for a little longer," said Craig Erlam, senior market analyst at OANDA.

The dollar wasn't gaining from the heightened expectations surrounding a December rate hike. Lee Hardman, currency analyst at Bank of Tokyo-Mitsubishi UFJ, said comments from Fed officials that raising rates early could limit future rises weighed on the U.S. currency. The euro was up 0.2 percent at $1.0700 while the dollar fell 0.3 percent to 123.09 yen.

Yesterday, the People's Bank of China cut interest rates on loans by small lenders. The rate on a one-week loan by small banks and credit cooperatives was reduced from 5.5 percent to 3.25 percent. The rate for an overnight loan was cut from 4.5 percent to 2.75 percent. Beijing has cut its benchmark lending rate six times since last November as economic growth slowed. But those cuts applied to large state-owned banks that lend mostly to government companies, not to entrepreneurs who generate most of China's new jobs and wealth.

Benchmark U.S. crude fell 10 cents to $40.65 per barrel on the New York Mercantile Exchange while Brent crude, used to price international oils, rose 26 cents to $44.40 a barrel in London.