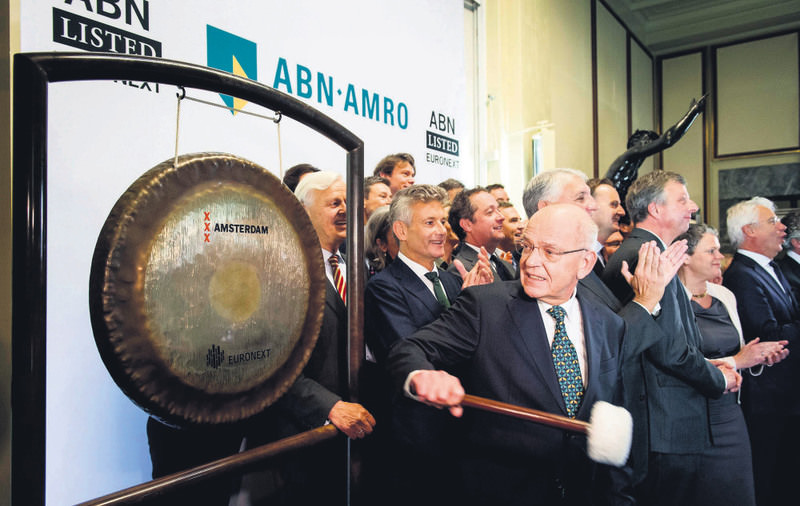 by Nov 21, 2015 12:00 am
Seven years after nationalization,, ABN Amro has bounced back in the stock market on Friday with rising shares in what is seen as one of the biggest IPOs by a European lender since the financial crisis. Top bank officials clapped and cheered at the Amsterdam stock exchange as the share price climbed steadily in early trading.

The chairman of the bank's board, Gerrit Zalm, rang the gong to symbolically mark the start of trading. "We are back, and that's great," he said, adding his bank was "solid, offering an attractive yield."

"The process has gone well," Dutch Finance Minister Jeroen Dijsselbloem said, hailing the return to the market of the country's third largest bank. It marks a new era for the institution after a troubled patch triggered by the 2008 crisis.

The Dutch government, which led the bailout during the tumult of the financial meltdown, is hoping to recoup some of the 22 billion euros it spent to prop up the bank. Some two hours after opening 2.30 percent higher at 18.18 percent, shares consolidated early gains, to settle at around 18.36 euros, a rise of about 3.44 percent. Initially, the price per share had been fixed at between 16 and 20 euros. However, ABN Amro said in a statement early Friday that the price had been set at 17.75 euros per share. That will generate some 3.3 billion euros, the bank said in a joint statement with the state administrators of the offering, adding that it priced ABN Amro's current value at 16.7 billion euros. The government was carefully monitoring Friday's IPO, Dijsselbloem said. "Naturally, we want to see a small upwards movement, so there is no disappointment. As you know, we have another 80 percent of shares to sell," he added.

ABN Amro has confirmed that an additional 3 percent share is available and "can be exercised to cover over-allotments or short positions," if there is a high demand. "It's a successful IPO," an analyst from the Dutch bank Theodoor Gilissen, Jos Versteeg, told AFP. "It has been properly handled. And it's a good price per share," he said, adding that analysts did not see much room for big price movement in the future.

To avoid all the shares being snapped up by major investment funds and other institutional investors, ABN Amro held back 10 percent for individual buyers in the Netherlands. Although government officials have reported that the bailout cost the government around 22 billion euros, its main audit body estimated the actual price tag to be around 32 billion euros, the Dutch media has reported.

The Netherlands' third-largest bank behind ING and Rabobank, ABN Amro, has roots dating back to the 19th century. It was listed on the Amsterdam stock exchange before being bought in 2007 by a consortium which consisted of the Spanish lender Santander, the Royal Bank of Scotland and the Belgian-Dutch outfit, Fortis. But the 71 billion-euro-deal, one of the largest in banking history, proved calamitous for the three buyers.

Some 73 percent of the Royal Bank of Scotland is now owned by the British government after a 45.5 billion pounds rescue in 2008. Fortis was also dismantled during 2008 to avoid bankruptcy. Its Dutch activities, including its share in ABN Amro, received a bail-out by the Dutch government, which then merged it back with ABN Amro Bank, and it has held the reins ever since.