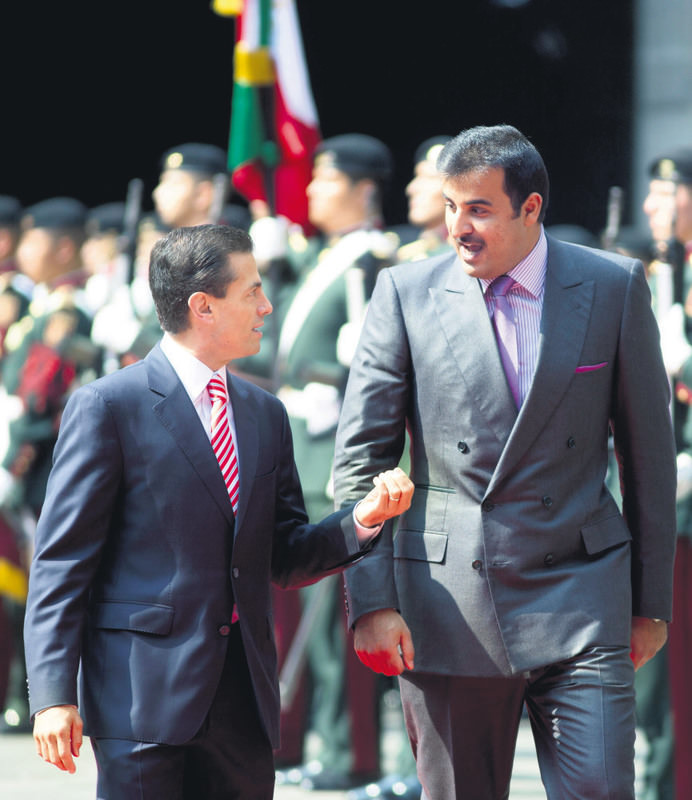 by Nov 26, 2015 12:00 am
Mexico and Qatar signed an agreement on Tuesday to establish commercial flights between their capitals as the Gulf monarchy's ruler visited the Latin American nation. Mexican President Enrique Pena Nieto (above-left) hosted Qatar's emir, Sheikh Tamim bin Hamad Al Thani, at Mexico City's National Palace, where they oversaw the signing of several agreements. It was the first visit by a Qatari emir since the two nations established diplomatic relations in 1975. Pena Nieto declared that the meeting will open opportunities for business between the two nations in energy and infrastructure, the Mexican presidency said in a statement.

The two countries inked an air service agreement to establish flights between Doha and Mexico City, the statement said. Their respective central banks signed a memorandum of understanding to exchange experiences in banking regulation and supervision. The governments also agreed on a technical cooperation deal to promote trade, mining, energy, agriculture, tourism and education. Pena Nieto accepted an invitation to visit Qatar at an undetermined date, which would be the first trip there by a Mexican leader. During a meal, Pena Nieto highlighted the "clear interest" to boost ties, while the emir echoed the desire for "strong relations," the statement said. Qatar is Mexico's fourth biggest trade partner in the Middle East.
RELATED TOPICS