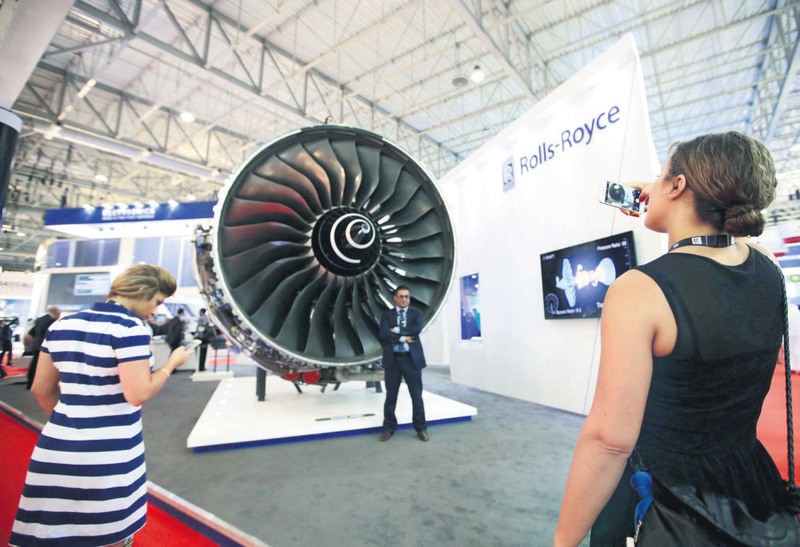 by Barış Ergin Dec 03, 2015 12:00 am
British aero-engine manufacturer, Rolls-Royce Limited, aspires to produce the engine of Turkey's national fighter jet, which is currently being developed and is expected to take its first flight in 2003. Patrick Regis, Rolls-Royce Limited's regional director for Turkey and the Middle East, said the company can produce nearly 100 percent of the fighter jet engine in Turkey.

Regis said Turkey will decide whether it will produce a single-engine or double-engine fighter jet in 2016, adding that Rolls-Royce will contribute to the production with its EJ200 jet engine if a double-engine jet is decided on. "If we can take part in the project, we will establish a jet factory in Turkey in 2025," Regis said.

Regis also said the aerial, ground and marine projects that STM Defense Technologies Engineering - an affiliate of the Undersecretariat for Defense Industries - exactly matches Rolls-Royce's sphere of activity, stressing that the company can become a major partner of STM.

Referring to ongoing talks between Rolls-Royce and Turkish Airlines (THY) to open an engine maintenance and repair center in Turkey, Regis said this center can only be opened if at least 100 engines are employed on an annual basis. "If the number of THY's wide-body aircraft reaches 100, we can plan to open that center," Regis said, adding that the company also has interests in the repair of THY's aircraft engine parts, in cooperation with THY Teknik, the technical branch of THY. Regis also said Rolls-Royce can take the business further by cooperating with THY Teknik to produce all parts of the engines.

Rolls-Royce Limited produces 55 percent of its products for the civil aviation sector, including engines for THY. It aims to be THY's key engine supplier in 2016. Rolls-Royce also contributes to the nuclear industry, producing control systems and emergency diesel engines. It aims to cooperate with Turkish industry on the production of parts and control systems for the nuclear power plant that is planned to be constructed in Sinop. Turkey is one of the largest markets for Rolls-Royce, which has important customers in the country.

Stressing the fact that Turkey has a very qualified workforce and that the government supports plans regarding production and technology, Regis said the company wants to transfer its technical expertise through the use of and further improvements to Turkey's supply chain.
RELATED TOPICS