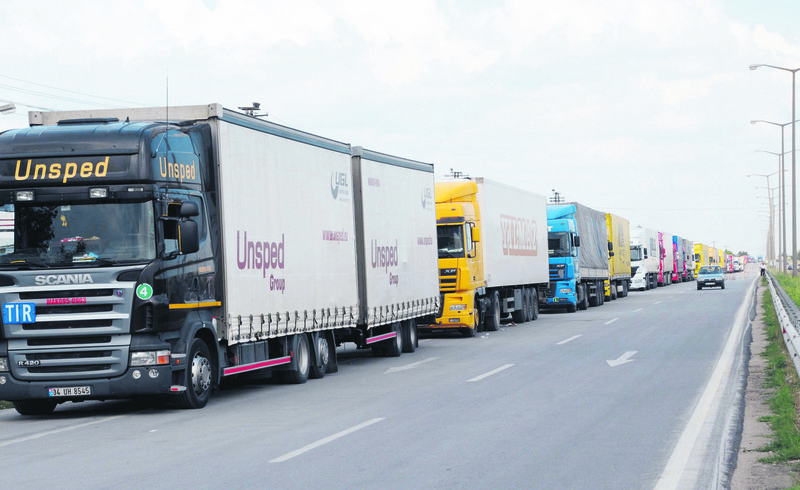 Turkish trucks have turned to the Caspian route since Moscow banned them from entering Russia. According to a recent report, this route actually can help cut costs and open doors to new markets

With the ongoing tension between Turkey and Russia having negative implications on bilateral trade and border gates in both countries, the Caspian Transit Corridor has come to the fore as an alternative route for the Turkish logistics sector to reach the Central Asian markets. It is said this alternative route might offer new markets for Turkey, reduce transportation expenses and enable Turkey to make a profit from trade between Asia and Europe. To this end, Turkey urgently needs to the complete the construction of the rest of the Kars-Tbilisi-Baku railway that remains inside Turkey's borders. Currently, 76 kilometers of the railway, which will directly connect Turkey, Georgia and Azerbaijan, has yet to be completed by Turkey. After Turkey downed a Russian fighter jet which violated Turkish airspace near the border with Syria, Russia issued a decree to impose a raft of economic sanctions on Turkey and prevented trucks carrying Turkish export goods from both entering the country and passing through transit routes in the country. According to "The Caspian Transit Corridor" report prepared by the Istanbul-based think-tank, Caspian Strategy Institute (HASEN), the tension between Turkey and Russia highlights the importance of the Caspian Transit Corridor. The corridor, which is said to be faster and more economical, will enable Turkey to open up to other markets.

HASEN Secretary General Haldun Yavaş said the corridor has great potential that will offer new export markets for Turkey and help it save on transportation expenses, adding, "It also offers an opportunity to reap profits from trade between China and the EU and to have a share of that transportation." Yavaş underlined that this is an indirect response to the unfavorable consequences of the crisis with Russia.

According to the report, Turkey's exported $8.5 billion worth of goods to Georgia, Azerbaijan, Kazakhstan, Turkmenistan, Uzbekistan and Kyrgyzstan, which are all located on the Caspian Transit Corridor, and imported $3.23 billion worth of goods from these countries in 2014. HASEN specialist Zafer Acar said these countries may be a remedy for Turkey's troubled relations with Russia, adding, "Turkey exports nearly $1 billion worth of fresh fruits and vegetables to Russia. These fruits and vegetables, which Russia has stopped importing, might be exported to these countries via the Caspian Transit Corridor." Underlining that the corridor might offer new markets for Turkey, Acar said the route will also help Turkey reduce high logistical expenses that stem from the fact that Turkish trucks that carry goods to Russia return empty from the country. Acar also stated that if these trucks go to Kazakhstan, they might bring cereals, oil products and Chinese goods from the country - which will bring down transportation costs.

In a recent interview with Reuters, Fatih Şener, the head of the International Transporters' Association, said the transition of Turkish trucks via the Caspian route is a major item on the association's agenda.

The HASEN report suggests that Turkey might have a share in the fast-growing trade between China and Europe via the Caspian Transit Corridor. According to the report, the foreign trade volume between China and Europe is expected to reach $800 billion in 2020 from $615 billion in 2014. The report also says that there are three main routes for trade between Asia and Europe and the most advantageous one of these is the Caspian Transit Corridor, which reaches Europe after passing through China, India, Afghanistan, Kazakhstan, Turkmenistan, Uzbekistan, Kyrgyzstan, Azerbaijan, Georgia and Turkey. Highlighting that this corridor is faster and less costly than the other two alternatives, Acar stated although it takes between 25 and 30 days for goods to reach Europe from China via the Southern Corridor, this period is reduced to around 15 days in the Northern Corridor and to around 12 days in the Caspian Transit Route. The cost of transportation of goods via the Caspian Transit Corridor is less than the half of the expenses accrued using the route that passes through Russia.

The report pointed to investments that Turkey urgently needs to make, adding that although the 4,000-kilometer-long railway which spans from China to Baku, as well as the Azeri and Georgian parts of the 838-kilometer-long Kars-Tbilisi-Baku railway has been completed, a 76-kilometer part of the railway has not yet been completed. If Turkey fails to complete the construction of the line on time, it might miss the opportunity to have a share in eastern-western trade. The report indicated that this line might directly reach Romania from Georgia and other parts of Europe via the Black Sea, and therefore, Georgia's port projects such as Anaklia might pose a major threat to Turkey.
RELATED TOPICS