53 companies to continue to employ Turkish workers in Russia 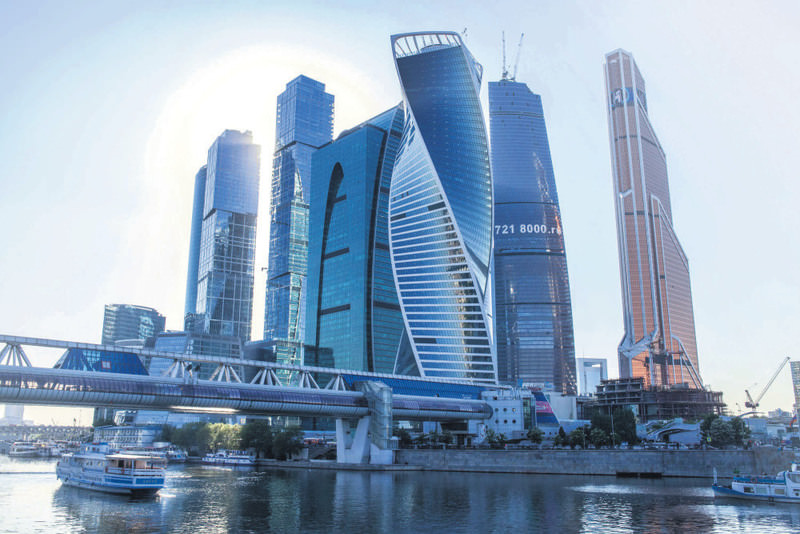 Moscow's Evolution Tower, which is built by a Turkish construction company Ru00f6nesans (center).
by Daily Sabah Dec 25, 2015 12:00 am

The Russian government approved a regulation that allows 53 companies to employ Turkish workers in 2016. According to the information published on the official website of the Russian government, a total of 53 companies that operate in Bashkortostan, Crimea, Tatarstan, Krasnodar, Vladimir, Kaluga, Moscow, Nizhny Novgorod, Samara and Tyumen were excluded from the provisions of the sanctions imposed on Turkey by Russia, and these companies are allowed to employ Turkish citizens. The list of the companies that are involved in the construction, automotive and plumbing sectors has not yet been published.

The Russian daily Kommersant previously announced that Moscow might amend the sanctions that are imposed on Turkey-based companies for certain construction companies operating in Russia. The article quoted two anonymous sources that said Turkish companies including Enka, Rönesans İnşaat, IC Içtas, Ant Yapı, Mebe and Odak Group will be allowed to operate in Russia. Enka shares, which dropped 8.9 percent since Turkey downed a Russian SU-24 military jet that violated its airspace on Nov. 24, increased 3.2 percent, and traded for TL 4.53 ($1.55) following the new development.

With market share totaling 19.4 percent, Russia is the biggest foreign market for Turkish construction companies. Turkish contractors who won tenders worth $3.9 billion in 2014 undertook $2.3 billion worth of work in the first nine months of this year in Russia. The president of the Turkish Constructors Association (TMB), Mithat Yenigün, previously said some Turkish companies had to deal with unpleasant practices in Russia, and other opportunities in alternative markets should be considered in order to make up for any potential losses.

Russia banned the employment of Turkish citizens by companies operating in Russia starting from Jan. 1, 2016, in accordance with the sanctions signed by Russian president Vladimir Putin on Nov. 28. Furthermore, some Turkish goods have been banned from entering the country.Russia has been going through hard times due the decline in oil prices, Western sanctions and the slump in capital inflow into the country. This being the case, Turkey is a major trade partner for Russia, whose exports to the country amount to more than $25 billion annually. The foreign trade volume between Turkey and Russia soared from $26.2 billion in 2010 to $31.2 billion by the end of 2014 - a 17.3 percent upsurge. In 2014, Turkish companies invested more than $10 billion in Russia, with the tourism, construction, food, home appliances and banking sectors taking the lead. Turkey functions as a major market that enables Russia to access global markets. Russian Sberbank, which entered the Turkish market by purchasing DenizBank in 2012, currently operates in the banking sector.

Millions of dollars in Russian energy projects are frozen due to Western sanctions and falling oil prices. Both the U.S. and the European Union (E.U.) have been imposing sanctions on Russia since 2014 and on Monday the EU decided to extend these sanctions another six months while the U.S. responded by blacklisting another 34 individuals and companies on Tuesday.

The Russian economy has lost roughly $100 billion due to falling oil prices, according to the country's finance ministry.

The imposed sanctions have caused Russia to adopt a new strategy toward Asia, which is reflected in a major agreement - worth $400 billion - recently signed by Russian President Vladimir Putin and Chinese President Xi Jinping. Despite these developments, the Russian ruble has lost more than 50 percent of its value and there has been no progress made regarding anticipated pipeline projects - including the Altay pipeline worth $17 billion and the Siberian Power pipeline worth $20 billion.

Two distinct underwater pipelines with a 55 billion-cubic-meter capacity - known as the Northern Stream-2 - were scheduled to be built under the Baltic Sea in Germany but is now another project that could become obsolete. The Russian state-owned energy giant Gazprom signed an agreement with three Austrian-based German energy companies - E.ON,BASF and OMV - in September; however, the majority of Eastern European countries, including Poland, Slovakia and Ukraine object to the implementation of the project.
RELATED TOPICS