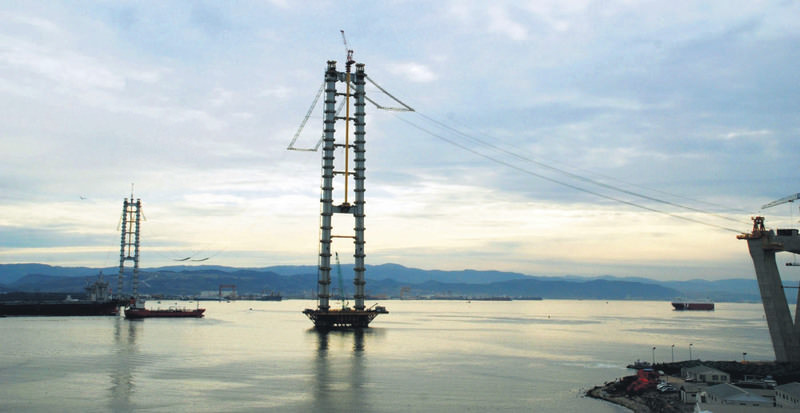 by daily sabah Jan 04, 2016 12:00 am
The İzmit Bay Suspension Bridge, which will become the fourth longest suspension bridge with the largest central span in the world, is nearing completion. The largest foot of the Gebze-Orhangazi-İzmir Highway Project - which will shorten the journey between Istanbul and İzmir to three-and-a-half hours from nine hours - is to be opened for service at the end of April. There are currently 1,500 employees working on the project, out of which 650 are welders.

The journey to cross the İzmit bay will drop to six minutes. One-hundred-and-thirteen bridge deck slabs will be assembled to make the bridge and assembly works are scheduled to commence on Jan. 20, when the first group of slabs will be mounted at the foot of the towers.

The 252-meter-high bridge will give İzmit a new skyline and has been coined "the collar" of İzmit. The build-operate-transfer model project for Gebze-Orhangazi-İzmir Highway will be completed after seven years of work and the Gebze-Gemlik section of the İzmit Bay Suspension Bridge is to be opened to traffic next year. The highway will shorten the distance by 95 kilometers, while advantages have been calculated in feasibility studies. The 8-to-10-hour drive will drop to three-and-a-half hours and as a result saving approximately $650 million. It takes a little under an-hour and-a-half to cross İzmit Bay by car and the ferry rides take around 45 to 60 minutes. However, with the suspension bridge, the time to cross the about 12-kilometer-wide İzmit Bay will drop to six minutes.
RELATED TOPICS