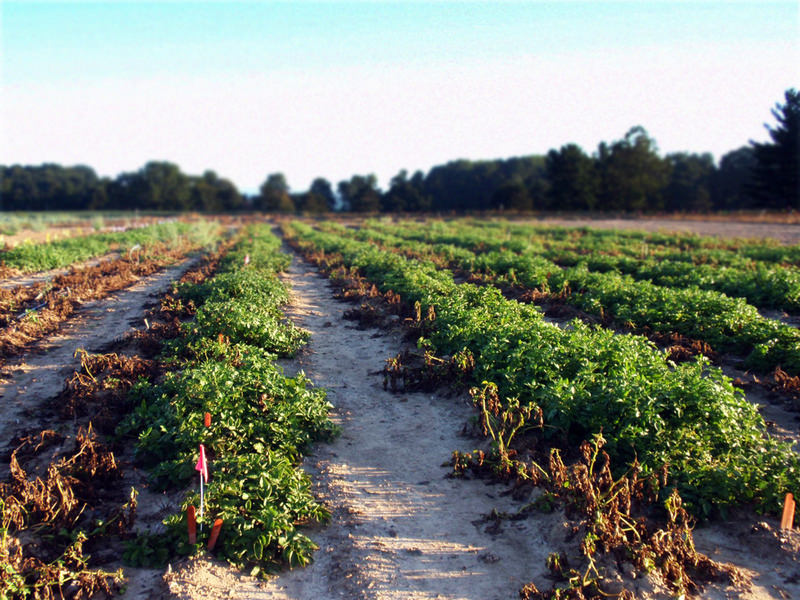 A demonstration field of the new potato, genetically engineered to resist the pathogen that caused the Irish Potato Famine, at Michigan State University in East Lansing, MI.
by Daily Sabah with AP Jan 15, 2016 12:00 am

The FDA approved a potato genetically engineered to resist the pathogen that caused the Irish Potato Famine, which killed 1 million people in Ireland in the 19th century

A potato is not just a potato. Once, it was used to feed entire nations like Ireland, and a disease could have triggered calamitous disasters such as the one that happened in Ireland in the 19th century. The Great Famine or the Great Hunger was a period of mass starvation, disease and emigration in Ireland between 1845 and 1852. It is sometimes referred to, mostly outside Ireland, as the Irish Potato Famine, because about two-fifths of the population was solely reliant on this cheap crop for a number of historical reasons. During the famine, approximately 1 million people died and a million more emigrated from Ireland, causing the island's population to fall by 20 to 25 percent. The proximate cause of famine was phytophthora infestans, a potato disease commonly known as potato blight, which ravaged potato crops throughout Europe during the 1840s.

And, with the new development, it could never happen again. According to the Associated Press (AP), a potato genetically engineered to resist the pathogen that caused the Irish potato famine is as safe as any other potato on the market, the United States Food and Drug Administration (FDA) said.

In a letter Tuesday to Idaho-based J.R. Simplot Co., the FDA said the potato is not substantially different in composition or safety from other products already on the market, and it does not raise any issues that would require the agency to do more stringent premarket vetting. "We're pleased and hope that consumers recognize the benefits once it's introduced into the marketplace next year," Doug Cole, the company's director of marketing and communications, said yesterday. Before the potato is marketed to consumers, it must be cleared by the U.S. Environmental Protection Agency (EPA), Cole said. That is expected to happen in December.

The Russet Burbank Generation 2 is the second generation of Simplot's "Innate" brand of potatoes. It includes the first version's reduced bruising, but less of a chemical produced at high temperatures, that some studies have shown can cause cancer. The second-generation potato also includes an additional trait that the company says will allow potatoes to be stored at colder temperatures longer to reduce food waste. Haven Baker, vice president of plant sciences at Simplot, said late blight - the cause of the Irish Potato Famine - remains the number one pathogen for potatoes around the world. "This will bring 24-hour protection to farmers' fields. In addition, [it] has the potential to reduce pesticide spray by 25 to 45 percent," Baker said. The late blight resistance comes from an Argentinian variety of potato that naturally produced a defense. "There are 4,000 species of potatoes," Baker said. "There is an immense library to help us improve this great food. By introducing these potato genes, we can bring sustainability and consumer benefits."

But one of the company's oldest business partners, McDonald's, has rejected using any of Simplot's genetically engineered potatoes. Cole said the company plans to introduce the potatoes to other restaurants and hotel convention centers as precut and pre-peeled potatoes, where he said the resistance to bruising makes them a good product.

Back to the history, the Irish Potato Famine also laid a foundation of a historic friendship between Turkey and Ireland. In 1845, Ottoman Sultan Abdülmecid I sent 1,000 pounds of food to Ireland along with five fully stocked ships. A letter written by Irish notables in the Ottoman archives explicitly thanked the Sultan for his help. The ships landed in Drogheda; in 1995, the Drogheda town hall erected a placard in commemoration. Former Irish President Mary McAleese paid an official state visit to Turkey in March 2010 and thanked the country for its help that was sent by Abdülmecid I.
RELATED TOPICS