Chinese GDP to worry central banks at home and abroad 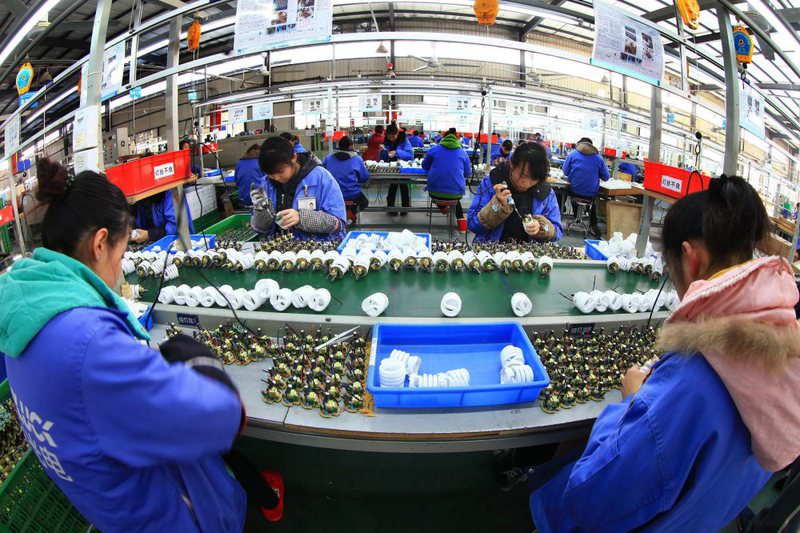 Women work on the production line of energy-saving lamps in a factory in Suining in southwest China's Sichuan province. China allowed the Chinsese official Renminbi currency to weaken further amid efforts to save its weak economic growth.
by reuters Jan 18, 2016 12:00 am

Economists said the expansion of the Chinese economy was held back by sluggish domestic and external demand, weak investments, factory overcapacity and high property inventories,

which exacerbated deflationary pressures in the economy. The poor figures bolster arguments for more Chinese monetary policy easing on top of the six interest rates cuts seen since November 2014 and suggest that more currency depreciation is coming to prop up corporate profitability, bad news for advanced economies. An even weaker yuan will export China's deflationary pressures to advanced economies that are already struggling with anaemic price growth, amplified by a fall in oil prices to 12-year lows.

China's annual fourth-quarter GDP likely slowed to 6.8 percent from 6.9 percent in the third quarter, the weakest reading since the global financial crisis, while full-year growth is seen at a 25-year low of 6.9 percent.

The Chinese government is expected to target economic growth of at least 6.5 percent in 2016, but that could require more rate cuts, increased government spending on infrastructure and easing curbs on the cooling property sector. ING expects Chinese authorities to restrict international capital flows and tighten systemic regulation so the central bank can cut rates further without exerting further downward pressure on the currency, also known as renminbi.

But Albert Edwards, a strategist at Societe Generale known for his bearish stance, has bigger fears: "Investors are coming to terms with what a Chinese renminbi devaluation means for Western markets. It means global deflation and recession," he said.

Although China was a fading concern for central banks in recent months, market turbulence at the start of the year will likely propel it back on top of the agenda, particularly after another plunge in oil prices, a factor of weak emerging market demand.

Meeting for the first time since it cut interest rates and extended quantitative easing in December, the ECB is expected to remain on hold on Thursday but will likely express serious concern about emerging market prospects as the euro area inflation and growth outlooks fade. At the previous policy-setting meeting the ECB was already worried that its inflation forecasts may be too optimistic and said it needed to maintain firepower if risks materialize.

And the ECB has barely had any time to gauge the impact of its most recent set of measures, suggesting the central bank could wait until mid-year before acting again.

"We expect the ECB to ease policy further in 2016 as deflationary pressures worsen," Barclays said. "However, we think new measures are unlikely to be deployed before June, unless we see another bout of euro appreciation or a further significant drop in inflation expectations."

Canada's central bank will have a tougher time deciding. Although most analysts expects rates to remain on hold at 0.5 percent, markets see a bigger chance of a cut to 0.25 percent on lower growth prospects, falling oil prices and a poor Bank of Canada survey.

Meanwhile, global banks have started to hand back investment quotas used to buy Chinese stocks and bonds because alternative channels for investment in China and the sliding yuan are making this once lucrative business unprofitable. While China's move to open up its capital markets and allow its currency to trade more freely has created opportunities for global banks, these developments are also threatening to kill off niches where they have acted as middlemen to give previously excluded foreign investors backdoor access to the mainland. Several banks, including Barclays, Commerzbank, Norway's SEB and the Netherlands' ING, handed back just over $800 million in quota granted by Chinese authorities under the Qualified Foreign Institutional Investor (QFII) scheme between April and September 2015, public data shows. Other banks are considering following suit, according to individuals familiar with the discussions. The move does not reflect a waning appetite for investment in China, however, despite its slowing economy; overall quotas for QFII have quadrupled to about $81 billion since 2010.

But banks' share of the quotas, which they repackage into derivatives such as p-notes and sell on to investors who don't have access to Chinese markets, a practice known as quota renting, has dwindled to just 14 percent from 37 percent over that period.

That means more foreign investors such as asset managers and index funds, the biggest users of such products, have access to China through QFII or new alternative avenues for investment such as the Hong Kong Shanghai Stock Connect scheme and the more flexible yuan-denominated RQFII - so fewer need the banks as go-between.
RELATED TOPICS