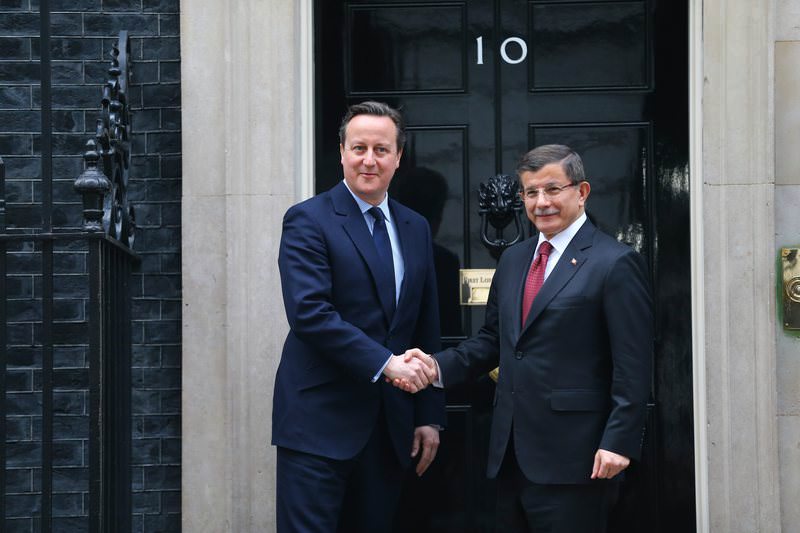 Underlining the legislative reforms and microeconomic reforms on the agenda, Prime Minister Ahmet Davutoğlu ensured the safety of investing in Turkey with the Turquoise Card, which will facilitate investments for foreigners

Prime Minister Ahmet Davutoğlu, speaking at the Turkish-British Businessmen's Luncheon, said that Turkey and the U.K. share common goals and political interests, emphasizing that not only the governments, but also Turkish and British business circles should strive for a better future in Europe and worldwide. "There is a huge cooperative agenda in front of us, deep historical ties behind us and a bright vision ahead," said Davutoğlu.

In talks with British businessmen, the prime minister pointed to the reforms of 25 sectors as announced by Turkey's new government, which include the improvement of the investment environment, the fight against the shadow economy, increasing local savings and productivity, the development of the health sector and the improvement of skilled labor and the labor market."

Davutoğlu also said that very comprehensive structural reforms will be made, the first of which will be governmental transparency and the fight against corruption. "The law of transparency was my personal promise. We have done a lot within the past 13 years but there is still room for improvements; namely, the development of standards, ethics, honesty and accountability in bureaucracy," said Davutoğlu.

He also noted that this issue will be at top of the agenda for the next three months along with a new public tender law.

The prime minister highlighted that the labor market is another crucial area for both the Turkish industry and foreign investors, a rigid sector which will be transformed to include more flexibilities regarding compensation, part-time work and freelance work. Regarding the Turquoise Card application, he said that Turkey wants to draw global talents and invited the British to purchase a Turquoise Card; thus, becoming half-Turkish. "Those who invest more will be given the right to become Turkish citizens. We are very flexible in giving citizenship to those who deserve it," added Davutoğlu. Regarding what it means to "rightfully gain citizenship," the prime minister underlined that making more investments and contributing economically and socially to Turkey would warrant the granting of citizenship.

Touching on the improvement of the investment climate and public finance, Davutoğlu stated that income tax reform, the improvement of tax payers' rights, expense reform and budget reforms that are based on performance are all on the agenda. New reforms regarding public administration - such as civil servant reforms - higher-quality public services and the expansion of the e-government portal are also on the way, according to Davutoğlu.

"We may lack natural resources, petroleum or natural gas but we have the most valuable resource of all: Human resources," said Davutoğlu, adding that they will be taking steps to train more qualified people. According to Davutoğlu, a special program for measuring the performance of teachers in the classroom -- including a quality index and various other regulations such as school budget regulations, foreign language education and lifelong education - are a few of the topics on the government's agenda. Other steps toward the liberalization of Turkey's energy sector will be taken, including the licensing and utilization of certain authorizations. Regarding Turkey's accession to the E.U., Davutoğlu noted that steps for improving the rule of law principle, democratic standards and the quality of institutions are of upmost importance. Noting that the negotiations on Chapter 17 with the E.U. already commenced last month, he pointed to the E.U.'s Progress Report which indicates that 27 out 32 stages are ready to be discussed. "We will enter a new chapter in our relations with the E.U. after resolving the Cyprus issue at the end of this year," stated Davutoğlu.

The day commenced with the 16th Turkish Investment Conference meeting, where Davutoğlu highlighted that this year's meeting was significant for the country since it is represented by a new government that will be in office for the next four years. Following a television appearance, he then attended various meetings with officials, including a meeting over lunch. He held a meeting with investors to address a broad range of issues, as well as provided the details of economic reform programs during these meetings. "I listened to the investors' opinions regarding what type of reforms they would like us to implement and what steps to take in Turkey," Davutoğlu said.

Davutoğlu also had a meeting with British Prime Minister David Cameron, noting that the two ministers discussed commercial, economic and common investments. The two planned ways to increase the current trade volume from $15 billion to $20 billion as well as regional issues such as Syria and the looming political negotiations expected there. "We agreed that the Syrian committee that will come to the [negotiating table] should reflect the actual opposition," Davutoğlu said. The pending humanitarian aid that will be sent to the region was also addressed, with Davutoğlu stressing that the siege in Madaya has left citizens without access to food and water - a crisis that is reaching epic proportions.

Davutoğlu also emphasized that the Syrian Donors' meeting - initiated by Cameron in aims to help the Syrian refugees - will be held on Feb. 4 with Davutoğlu in attendance. Stressing the positive relations between the two countries, Davutoğlu said: "[Cameron] expressed that the voice of Turkey should be heard in all efforts regarding Syria. I invited him to Istanbul for the World Humanitarian Aid Summit to be held on May 23-24." After delivering a speech at the political think tank Chatham House, Davutoğlu will travel to Sweden to hold meetings with investors. Then, he will travel to Germany for an intergovernmental meeting with German Prime Minister Angela Merkel.
Last Update: Jan 20, 2016 9:27 pm
RELATED TOPICS