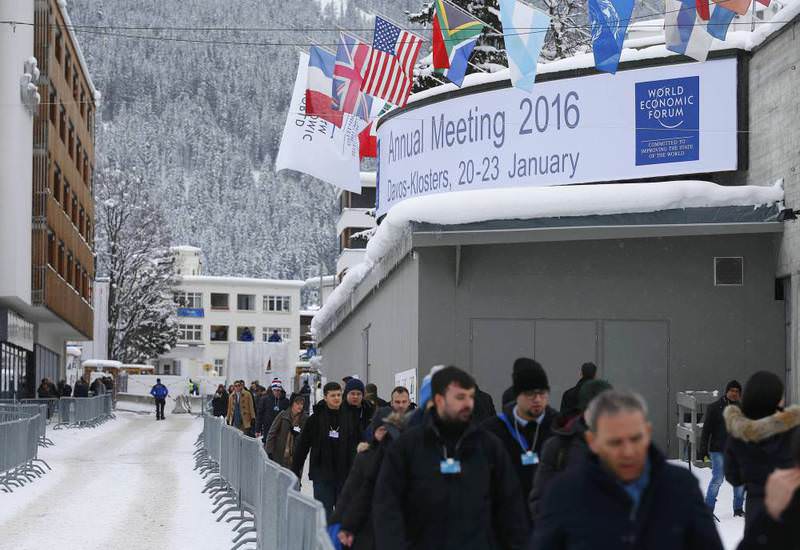 Attendees walk outside the Congress Center during the Annual Meeting 2016 of the World Economic Forum (WEF) in Davos, Switzerland yesterday.
by Daily Sabah with Wires Jan 21, 2016 12:00 am

The World Economic Forum started in Davos on Wednesday hosting top-investors and politicians and focusing on major topics such as the refugee crisis, climate change, global inequality, technology and ‘The Fourth Industrial Revolution'

More than 40 political leaders and 1,500 business representatives from more than 100 countries are attending the four-day World Economic Forum, which kicked off Wednesday in Davos, Switzerland. Turkey's Prime Minister Ahmet Davutoğlu, along with Deputy Prime Minister Mehmet Şimşek and Foreign Minister Mevlüt Çavuşoğlu, are attending the summit, with topics covering a wide range of issues including the refugee crisis, climate change, global inequality, technology and "The Fourth Industrial Revolution." Davutoğlu is scheduled to deliver a speech titled "Turkey's Global Role" on Thursday.

The summit has been criticized as "elitist" in previous years, this year has prepared a room to illustrate the refugee crisis which has rocked Europe's agenda and demonstrate the challenging circumstances under which refugees live. The room aims to enable participants to feel empathy with refugees by allowing understanding of their living conditions.

Security measures in Davos this year are tighter than in previous years, with nearly 5,000 security staff being deployed across the town. Press members are not allowed to enter the town in their own vehicles.

The refugee inflows into Europe will grow gross domestic product (GDP) by a "positive but small" amount, if the burden is equally shared by states, said International Monetary Fund (IMF) Managing Director Christine Lagarde at the World Economic Forum (WEF) in Davos, Switzerland. According to The Telegraph's report, Lagarde gave a presentation on Jan. 20 on an IMF study addressing migrants, and stressed "migrants would not bring down wages." "The current surge in refugees is a challenge with an upside potential. With appropriate policies, this rich source of human capital can be harnessed with benefits for everyone," Lagarde said. Lagarde's statement underscored the IMF findings that demonstrate "GDP will be lifted by about 0.05 percent, 0.09 percent and 0.13 percent for 2015, 2016 and 2017, respectively." Also, the depressant effect of the flow on wages will be "temporary," according to the IMF chief.

The IMF's report accents "labor integration," and emphasized that if refugees entering Europe manage to integrate into the labor market, the level of GDP could increase by around 0.25 percent by 2020 for the European Union. Meanwhile, in the three main destination countries of Austria, Germany and Sweden, this increase rate could be between 0.5 and 1.1 percent, according to the report.

Prime Minister Ahmet Davutoğlu came together with high-level executives of the transnational companies in bilateral meetings held with top investors in Davos, Switzerland. Having visited Davos to attend the World Economic Forum, Davutoğlu met one-on-one with the CEO of DHL Global Ken Allen, the high-level executive of APM Terminals, Kim Fejfer, the head of the board of members of Mitsubishi, Yorihiko Kojima and the CEO of Coca Cola, Muhtar Kent. All private meetings are held closed to the press at the hotel where Davutoğlu stayed in Davos.
RELATED TOPICS