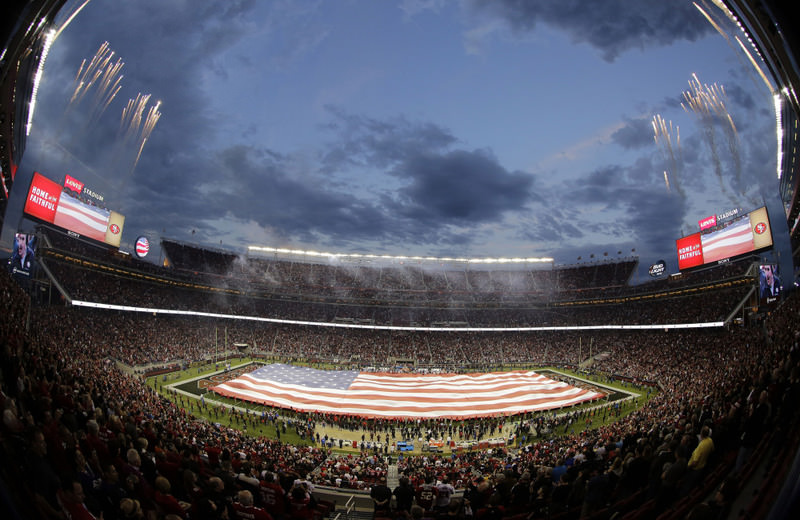 Facebook Sports Stadium, which will debut during the NFL's conference championship games and then the Super Bowl, features a live score and game clock at the very top of the page.
by Daily Sabah with Wires
Jan 22, 2016 12:00 am

Facebook Sports Stadium will debut during the NFL's conference championship games and then the Super Bowl. After that, the social media giant's first sports product will cover most major sporting events around the world

With 1.55 billion users, an estimated 650 million of them sports fans, it seems a natural place to gather for the kind of passionate conversation that accompanies virtually every pass, tackle and kick.

"Sports is inherently social and has been since the beginning of time," Facebook's Dan Reed says. "Historically, to watch a sporting event, you root for or against, you're watching it in the context of a physical stadium, and interaction is as essential as what is happening on the field. "Now, we can have that same interaction happening on a global scale through Facebook."

"We see the passion in the interactions. If you enter into this experience during a game, you will see a range of emotions, trash talk, memes going around," Reed said. "The same things happening in the stadium or a sports bar are happening on Facebook, and this allows people who are disconnected to interact as if they are watching together."

Users can conduct conversations with each other, get real-time stats, a live game clock, sanctioned photos and videos, team information and read commentary from media members.

"We think this complements the sporting experience," says product manager Steve Kafka. "It helps people build followings and get a wider audience. All the content already is on Facebook. They don't need to seek this out, we are taking folks connected with the game from the league, the teams, journalists and we put all that content and analysis in one place, and users can follow it during the game."

Facebook Sports Stadium features a live score and game clock at the very top of the page. Under the scoreboard are four tabs: Matchup, Friends, Experts and Stats. "Matchup" provides a quick summary of what's happening in the game, with a scoring summary and the most recent plays. Users can like, comment and share every play. There also is a "Live" indicator at the top where videos are uploaded about the game.

Next up for Facebook Sports Stadium after the conference championships and Super Bowl will be basketball, although Reed and Kafka weren't providing details yet. A good guess would be March Madness. Then, the Summer Olympics in Brazil.

"We are going to make sure the product is ready for all the sporting experiences," Kafka says. "This is just the beginning of a long journey for us."

Meanwhile, Nielsen has reached agreement with Facebook to improve how it measures the social media impact of TV shows, a useful means of assessing the size of an audience, the global information company announced, according to AFP. Nielsen created an indicator called the Nielsen Twitter TV Ratings in 2013 after long being criticized for failing to adapt to the changing ways in which people watch television. It allowed Nielsen to measure the number of Internet users sending tweets while watching a program, and also the number of people who see those tweets. Now this tool is being expanded to include Facebook comments, and the new set of metrics will be called Nielsen's Social Content Ratings, according to a Nielsen statement issued Wednesday. The Facebook component will include posts shared with friends and family, with followers, and publicly.