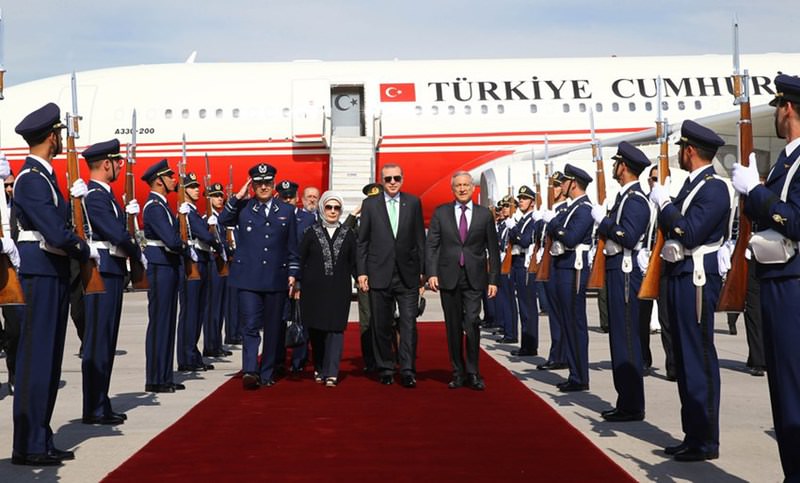 by Daily Sabah Feb 01, 2016 12:00 am
President Recep Tayyip Erdoğan, who began his five-day tour of South America on Sunday, is aiming to further develop business and diplomatic ties in the region that is increasing its global clout in recent years. Erdoğan and the accompanying Turkish delegation, who was welcomed to Chile Sunday afternoon by Foreign Minister Heraldo Munoz, is scheduled to proceed to Peru and Ecuador in the coming days. Accompanying the president on the visit is several senior journalists, Deputy Prime Minister Yalçın Akdoğan, Minister for Science, Industry and Technology Fikri Işık and Minister for Energy and Natural Resources Berat Albayrak. Erdoğan will conclude his trip to the continent on Feb. 4 and return to Turkey.

Erdoğan's three-nation Latin American tour started on Sunday with Chile, where he is scheduled to stay until Feb. 2. The President's trip to Chile will be the second Turkish visit to the country at the presidential level. The last such visit was by Süleyman Demirel 21 years earlier, when he served as the ninth president of Turkey.

Chile's former President Sebastian Pinera visited Turkey in 2012, when he signed a number of agreements as part of a strategic partnership framework. Chile was the first Latin American country with which Turkey signed a free trade agreement.

Ninety years have passed since bilateral relations started between the two countries, with Chile's recognition of the young Republic of Turkey. The trade volume between Turkey and Chile amounted to $417 million in the first 11 months of last year, a decrease from $921 million in the same period of 2014. Erdoğan will head to Peru on Feb. 2, as the first Turkish president to visit, and Ecuador will follow on Feb. 3.

While the tour is seen as critical for the development of bilateral relations between these countries and Turkey, the president will also preside over the signing of a series of important agreements expected to cover areas such as economic and technical assistance, industrial investment, infrastructure development and technical and scientific exchange. The total amount of foreign trade volume between the three countries and Turkey is $849 million, while their total value imports is $140 billion.

The president is also expected to address Turkish and South American business people during the visit.
Last Update: Feb 01, 2016 1:25 am
RELATED TOPICS