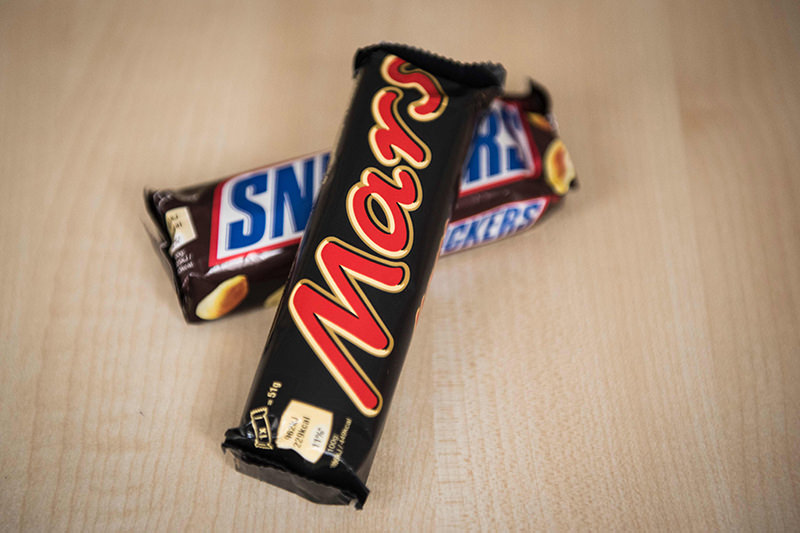 A Mars and a Snickers bar can be seen in Berlin on February 23, 2016. (AFP Photo)
by Compiled from Wire Services Feb 23, 2016 12:00 am
Mars Inc has recalled chocolate bars and other products in 55 countries, mainly in Europe, after a piece of plastic was found in a Snickers bar in Germany, the U.S. confectionery maker said on Tuesday.

All of the recalled products, which include Mars, Snickers and Milky Way bars, were manufactured at a Dutch factory in Veghel, according to a Mars spokeswoman. They were sold in European countries including Germany, France and Britain, and in certain countries in Asia.

The recall, in effect since Monday, follows a Jan. 8 complaint from a consumer in Germany, she said, who found red plastic in a Snickers bar and sent it back to the company.

"We cannot be sure that this plastic was only in that particular Snickers," a spokeswoman from Mars Netherlands said. "We do not want any products on the market that may not meet our quality requirements, so we decided to take them all back."

It was not immediately clear how much the complex recall would cost the company, which is unlisted and therefore does not disclose detailed financial information. The spokeswoman declined to comment on financial implications of the recall, which is the first to affect the factory employing about 1,200 people.

Consumer product recalls can have big reputational and financial effects, as Nestle learned last year when it recalled its Maggi noodles from India after a package was found to have unsafe levels of lead.

A statement posted earlier on the website of the Netherlands Food and Consumer Product Safety Authority said Mars was recalling Snickers, Mars, Milky Way, Celebrations and Mini Mix after a piece of plastic was found in one of its products that in certain circumstances could cause choking.

Mars Netherlands said it was working closely with the Dutch food safety authority on the matter, according to the statement.

The privately held company earlier said it had recalled products in Germany.

"We want to avoid having consumers who bought one of the (affected) products consume them," Mars said in a statement on its German website.

It said the recall affected all Mars and Snickers products, Milky Way Minis and Miniatures as well as certain kinds of Celebrations confectionery boxes with best-before dates ranging from June 19, 2016 to Jan. 8, 2017. Those dates may not be the same in other countries, the spokeswoman said.

The U.S. chocolate maker produces around 10 million snacks daily at its factory in western Germany's Viersen.

A spokesman was unable to say if Tuesday's recall was the biggest ever in the company's history.
Last Update: Feb 23, 2016 9:11 pm
RELATED TOPICS