BHP Billiton abandons payout policy as it swings to $5.7B loss 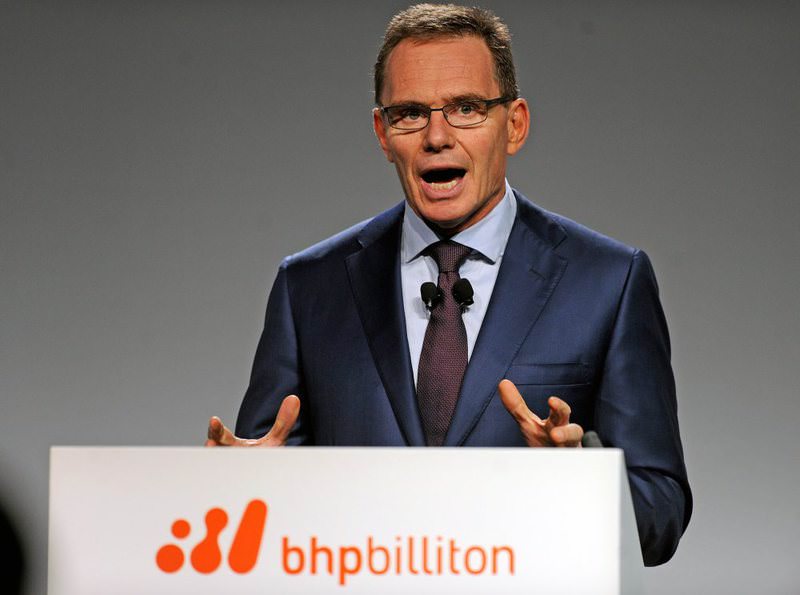 Anglo-Australian multinational mining, metals and petroleum company BHP Billiton CEO, Andrew Mackenzie, attends the Investor and Analyst Briefing, during the company's half year results in Melbourne.
by Compiled from Wire Services Feb 24, 2016 12:00 am

Mining giant BHP Billiton reported Tuesday a half year net loss of $5.67 billion and warned that the current period of weak commodity prices would be prolonged. The result for the six months through December 2015 was down 233 percent from the $5.35 billion the Anglo-Australian company posted for the same period a year earlier. Underlying earnings - which exclude one-off writedowns - were down 92 percent to US$412 million, according to AFP.

"Slower growth in China and the disruption of OPEC have resulted in lower prices than expected," said chief executive Andrew Mackenzie.

"However, our company remains resilient with assets that generate free cash flow through the cycle and a strong balance sheet."

"The result overall wasn't a huge surprise to the market as a cut to its dividend and sluggish earnings were expected," said CommSec analyst Steven Daghlian in explaining the share price rise.

The Anglo-Australian miner has been hard hit by falling prices for its two main commodities, iron ore and oil, with the company scrapping a long-held pledge to keep dividends steady or rising. It will now ensure a minimum 50 percent payout of underlying profit at every reporting period.

Its rating was downgraded to A from A+ by Standard & Poor's this month who placed it -- along with rival Rio Tinto -- on negative credit watch. At the time, the ratings agency warned BHP it could face another downgrade if it did not abandon its progressive dividend policy, and the interim return to shareholders was slashed to 16 US cents from 62 cents previously.

Like other miners, BHP has been forced to drastically tighten its belt and chairman Jac Nasser warned of an uncertain outlook.

"The changes to the dividend policy announced today reflect the board's assessment of the outlook for commodities and the increased financial flexibility this demands," he said. "While the continued development of emerging economies will underpin longer-term demand growth for commodities, we now believe the period of weaker prices and higher volatility will be prolonged."

Mackenzie explained that the new dividend policy was "part of a broader strategy to help BHP Billiton manage volatility".

"We have already responded decisively to the changed conditions," he said.

"The divestment of US$7 billion of assets and the demerger of South32 leaves us with a focused portfolio of large, low-cost, long-life assets in a set of favoured commodities."

BHP announced in January it would book a US$7.2 billion pre-tax writedown against the value of its struggling onshore US shale oil and gas assets, as it works to rein in costs and reduce risk.

The hefty writedown equates to US$4.9 billion after tax and follows BHP, a major player in the US oil and gas industry, taking a US$2.8 billion pre-tax hit on the same assets last year.

It has been a horror six months for BHP, which also dealt with a deadly dam rupture at a mine it co-owns in Brazil that spewed a wall of mud and water that virtually flattening a nearby village, with hundreds of people affected and at least 17 dead.

The Brazilian government is suing Samarco, a joint venture between BHP and Vale, and its owners for US$5.2 billion to pay damages to victims and clean up the river basin.

"Discussions on an agreement with the authorities for managing and funding long-term environmental and socio-economic rehabilitation plans are ongoing," said Mackenzie.
RELATED TOPICS