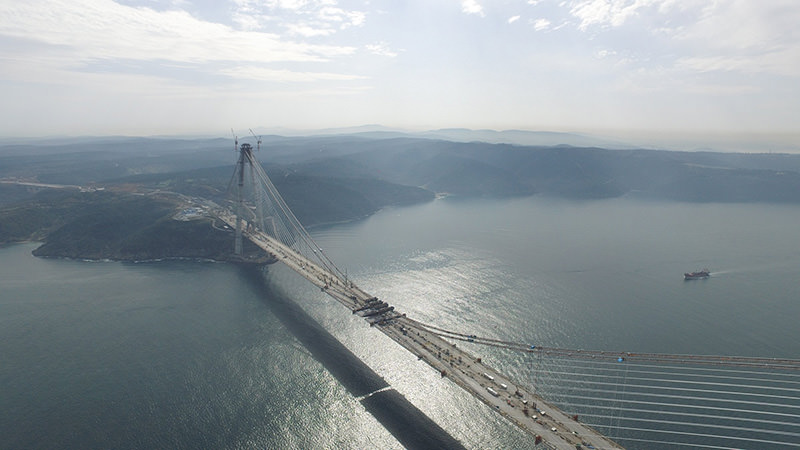 The Yavuz Sultan Selim Bridge, the third bridge to connect the two sides of Istanbul, is nearly complete. The last aprons were installed a couple of days ago, and after the installation of the last 9-meter section of apron, workers and engineers working on the bridge will be able to pass to the other side by foot. The aprons were produced in Yalova and brought to Istanbul by ship.

Transport, Maritime Affairs and Communications Minister Binali Yıldırım told Anadolu Agency (AA) that the bridge, together with its link roads and junctions, will be ready for inauguration in August.

The bridge is expected to alleviate traffic on the existing Bosporus bridges, and will help to ensure safe traffic flow in the city. Thousands of employees and engineers have worked on the construction of the Yavuz Sultan Selim Bridge. The total length of the bridge is 2,164 meters. The bridge, which stretches 1,408 meters over the Bosporus, has eight lanes of highway and two rail lines. It will be the longest suspension bridge in the world with a rail system. The height of the tower in Garipçe on the European side is 322 meters and the tower on the Poyrazköy district on the Asian side is 318 meters. The bridge will have the highest abutments in the world. The rail system on bridge will run from Edirne to İzmit, will be integrated into the Marmaray and Istanbul Metro and will also connect Istanbul Atatürk International Airport, Sabiha Gökçen International Airport and the third airport, which is currently under construction.