Coming to a hotel near you: The robot humanoid receptionist 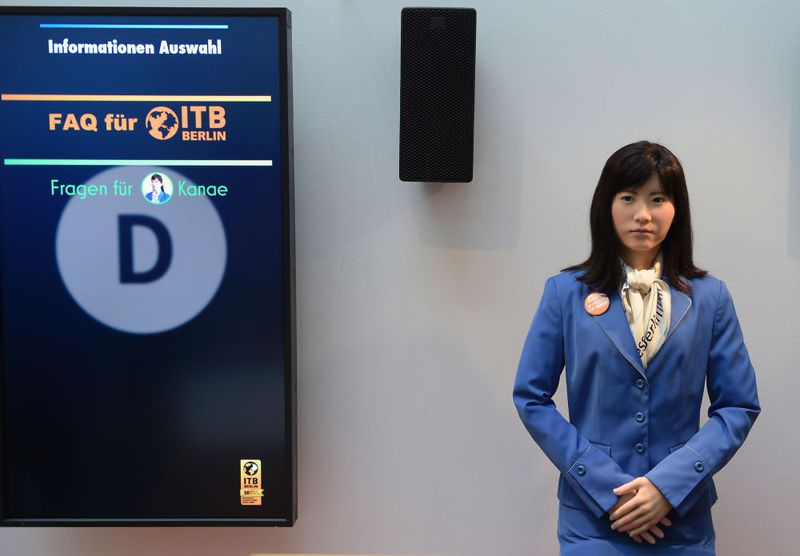 Robot Chihira Kanae, developed by Toshiba, is pictured at a welcome desk at the International Tourism Fair ITB in Berlin.
by Mar 14, 2016 12:00 am

Robots are making an entry into the hospitality industry that has until now always prided itself on delivering a warm, personable touch. Two in three people are comfortable with seeing robots in the tourism industry

In a hotel not in a galaxy far, far away, a robot bids you welcome as you pull into the driveway. Another hands out the keycard to your room, and a third gives you the password to the WiFi network.

Robots are making an entry into the hospitality industry that has until now always prided itself on delivering a warm, personable touch. At the entrance to Berlin's exhibition hall where thousands of travel industry professionals are gathering for the ITB trade show, humanoid robot ChihiraKanae greets visitors - in English, German, Chinese and Japanese.

Dressed in a blue jacket with a neck scarf, ChihiraKanae is on her first visit to Europe where she is seeking potential employment for herself and her kind. Three months ago, her "sister" began working as a meet-and-greeter in a Tokyo shopping center. Their creator, Toshiba, also foresees a great future ahead for them in tourism.

Mario has already found a job - at the Ghent Marriott Hotel in Belgium, where he has welcomed visitors since June. He is also multi-lingual, speaking 19 languages to be precise. On top of that, he helps serve hotel buffets and entertains guests by singing and dancing. Unlike ChihiraKanae, Mario doesn't pretend to look like a human.

Standing just 50 centimeters (1.6 feet) tall, Mario is white with red stripes, has speakers for ears and six fingers. But his employer is pleased with his work.

He "puts a smile on everybody's face," said Roger Langhout, director general of the hotel, adding, "It's a good way to get people to remember our hotel."

"We are still exploring the possibilities of Mario," he said, even if he acknowledges that humans can never be fully replaced by machines in the hotel business.

Oxford University's Carl Benedikt Frey believes, however, that robots do have a big future in the industry.

"In tourism, quite a few jobs remain non-automatable, like concierges or chefs," he said. "But a wide range of jobs are very much sustainable to automation," he added, suggesting that robots could work as waiters, dishwashers, tour guides or even chauffeurs. What is key is that they should do tasks that require only basic communication, he said.

In fact, a survey of 6,000 travellers by U.S. online bookings company Travelzoo found that two in three people are comfortable with seeing robots in the tourism industry. The Chinese are among the most enthusiastic, while the French and Germans are more reticent.

Taleb Rifai, secretary general of the World Tourism Organization, said the industry should broaden its usage of technology and robots. "I would not put any limit on the use of technology or innovation in any hotel or tourism facility," he said, adding: "As a matter of fact, we are way behind as a sector in the implementation of technology and the use of it. We were able to send a man to the moon long before we thought about adding wheels on a suitcase."

If robots are still a nascent discovery in the industry, virtual reality (VR) has charmed operators. German high-tech association Bitkom said virtual reality is the technology that "perhaps has the greatest potential" in the travel industry.

At several stands at the ITB fair, guests could put on virtual reality glasses and escape the gloomy Berlin winter.

In one case, you could lounge on a tropical terrace and watch elephants lumbering against the backdrop of the setting sun, while a waiter delivers a colorful cocktail. The hotel chain Cinnamon, which is active in the Maldives and Sri Lanka, is using the "new marketing tool" to allow potential visitors to get "closer to the product you see," said marketing director Dileep Mudadeniya.

At the stand for southern Germany's Bavaria region, young women dressed in the traditional dirndl dress are also trying to tempt visitors to put on the glasses for a glimpse of its green meadows and snow-capped mountains. British tour operator Thomas Cook has been a pioneer in giving its clients a VR preview of adventure - a tour by helicopter above Manhattan.

Professor Armin Brysch, from Kempten's Applied Sciences University in southern Germany, believes that VR is here to stay in the industry as it provides a "new quality of experience" that could entice people to book holidays in destinations that they may not have considered.

But would people just opt to see the world from their armchairs?

Unlikely, said Rifai. "To think that virtual reality could be used so that you stay at home and travel the world, it is not going to happen - I hope," he said.