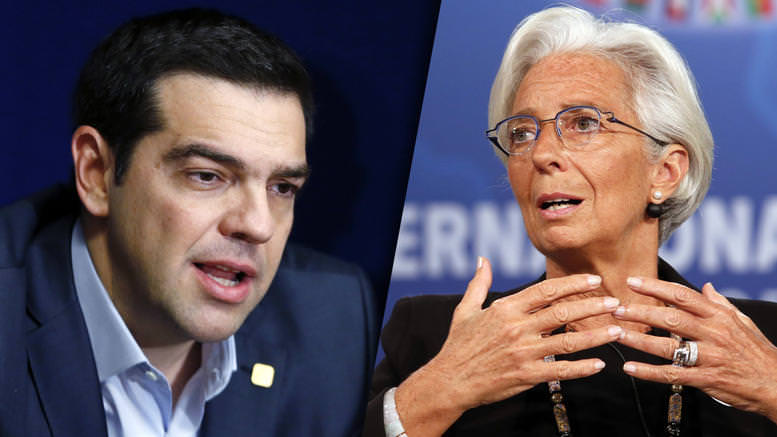 by Apr 04, 2016 12:00 am
Greece demanded an explanation from the International Monetary Fund on Saturday after an apparent leaked transcript suggested the IMF may threaten to pull out of the country's bailout as a tactic to force European lenders to more offer debt relief. EU/IMF lenders will resume talks in Athens on Greece's fiscal and reform progress next week aiming to conclude a bailout review that will unlock further loans and pave the way for negotiations on long-desired debt restructuring. The review has been adjourned twice since January due to a rift among the lenders over the estimated size of Greece's fiscal gap by 2018, as well as disagreements with Athens on pension reforms and the management of bad loans. Internet whistleblowing site WikiLeaks published what it said was the transcript of a March 19 conference call of three senior IMF officials discussing tactics to apply pressure on Greece, Germany and the EU to reach a deal in April.

The officials were quoted as discussing a threat that the fund might not participate in Greece's third bailout program as a way to force EU creditors, especially Germany, to reach a deal on debt relief before Britain's June referendum on whether to stay in the European Union. "The Greek Government asks the IMF for explanations whether pursuing the creation of bankruptcy conditions in Greece, just before the British referendum, is the Fund's official position," government spokeswoman Olga Gerovasili told state television.

An IMF spokesman in Washington said the Fund did not comment on "leaks or supposed reports of internal discussions" but added that the IMF had made its position known in public. "We have stated clearly what we think is needed for a durable solution to the economic challenges facing Greece - one that puts Greece on a path of sustainable growth supported by a credible set of reforms matched by debt relief from its European partners," the spokesman said.

The purported conversation involved Poul Thomsen, head of the IMF's Europe department, and Delia Velculescu, leader of the IMF team in Greece, and IMF official Iva Petrova. They discussed whether Greece could apply more austerity as a condition for receiving more aid ahead of big debt repayments in July and voiced frustration at the European Commission's reluctance to side with IMF pressure on Athens. They also suggest that Brussels is sticking to unrealistic assumptions about Greece's budget shortfall to minimize the need for debt relief, which is unpopular with Germany and other northern euro zone hawks.

If concluded the review will unlock a fresh tranche of about 5 billion euros, which Greece needs to pay off state arrears and ECB and IMF maturing debt. Greece has no major debt redemptions due until July.

The Greek government interpreted the leak as revealing an IMF effort to blackmail Athens with a possible credit event to force it to give in on pension cuts which it has rejected. However the transcript, if genuine, appeared to suggest Thomsen saw more prospect of the IMF applying pressure on German Chancellor Angela Merkel to concede debt relief to keep the fund involved in the bailout and secure Greek cooperation in managing Europe's pressing refugee crisis. "Basically we at that time say "Look, you Mrs Merkel you face a question, you have to think about what is more costly: to go ahead without the IMF, would the Bundestag say 'The IMF is not on board'? or to pick the debt relief that we think that Greece needs in order to keep us on board?" Right? That is really the issue," Thomsen was quoted as saying.

Commenting on the leak, Greek Prime Minister Alexis Tsipras told weekly newspaper Ethnos: "It seems that some people are playing games with an aim to destabilize us. We will not allow (IMF's) Thomsen to destroy Europe."