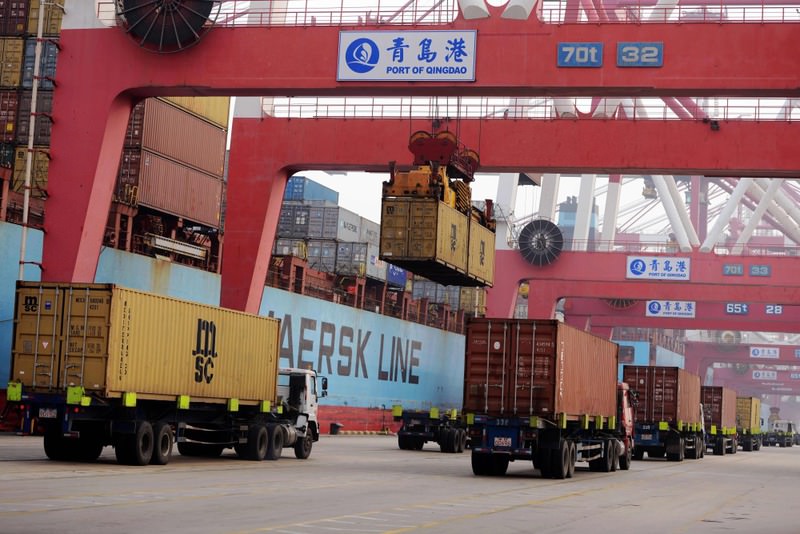 Chinese exports surged in March, the first gain in nine months and the latest positive data to come out of the world's second-biggest economy, despite warnings from analysts that Wednesday's headline figure masks an ongoing weakness in overseas demand.

Official figures showing a better-than-expected jump in overseas shipments come just days after another strong inflation reading and last week's surprise jump in an index of factory activity. The results fueled hopes that the slowdown of growth in the world's biggest trader of goods and a crucial pillar of the global trade industry may be bottoming out. Investors welcomed the news, sending the benchmark Shanghai composite index up 1.42 percent and Hong Kong's Hang Seng index up 3.19 percent.

The figures came ahead of the release Friday of first-quarter gross domestic product data, which a poll by AFP forecasts could show more weakened expansion.

Customs said exports increased 11.5 percent on-year to $160.8 billion, beating the 10-percent rise economists predicted in a Bloomberg survey and snapping an eight-month streak of declines caused by waning global demand. Exports plunged more than 25 percent in February. But imports fell for the seventeenth consecutive month, albeit at a slower pace, dropping 7.6 percent on-year to $131.0 billion, Customs said. However, analysts pointed out that the latest figures were driven by a low basis of comparison, after exports plunged 15.0 percent year-on-year in March 2015.

In a note, Zhao Yang of Nomura said that shipments rose mainly because of the "low base and the calendar effect" due to seasonal distortions centered around the Lunar New Year holiday, warning that "external demand has not improved as much as the number may suggest." But the pace of import declines has reduced, he noted, "possibly driven by faster investment and government spending." The recent pickup of electronic supply chains with new mobile phones was launched in March and may have contributed to export strength, ANZ Research said in a note, adding that import data indicate the "stabilization" of commodity prices.

After decades of double-digit expansion, China's economy grew 6.9 percent in 2015, the weakest in a quarter of a century, as its leaders try to transition it from one driven by government investment and exports to domestic consumer demand. The AFP survey saw a median estimate of 6.7 percent for January-March.

On Tuesday the International Monetary Fund raised its forecast for China's growth by 0.2 percentage points to 6.5 percent according to the April 2016 World Economic Outlook report. Customs said in a statement that while figures for the first quarter showed a yearly decline, seasonally adjusted monthly data is recovering. "The import volume of major bulk commodities such as iron ore, crude oil, and copper have maintained growth, while the prices of major import commodities remained low," it said. During the first three months of the year, China's trade with the EU, the U.S. and ASEAN all declined. "There are major obstacles still facing China's foreign trade development," Customs said.

It initially gave the figures in yuan terms, which showed an 18.7 percent rise in exports with imports slipping by 1.7 percent. Customs spokesman Huang Songping attributed the export growth in March to the low comparison base as well as government policy support.

He said that free-trade agreements, improvement in the ailing manufacturing sector, and a stable yuan exchange rate are additional positive factors.

But, he added: "The world economy still faces many uncertainties."

"The trade situation remains severe and complicated and the downward pressures are still big," he told reporters.

"But positive factors that will promote trade are accumulating," he added, expecting Chinese trade to "stabilize and improve" this year.

Electricity consumption rose 5.6 percent on-year in March, China's top economic planner said Wednesday, on higher demand from households and the service sector, in what could be another positive sign of activity.

The trade data "add to growing evidence that the extreme gloom of a few weeks ago" about China's economy was "misplaced," economists at Capital Economics said.

But Louis Kuijs of Oxford Economics said that despite investors' excitement over the headline figures, the underlying trends were "disappointing" and the seasonally adjusted monthly figures showed "weak sequential momentum," suggesting that "the rest of 2016 is likely to disappoint."
RELATED TOPICS