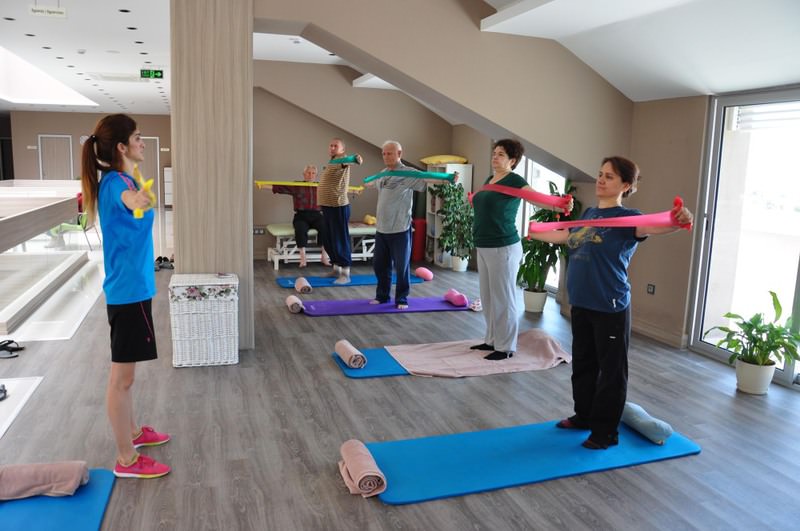 Foreign tourists' interest in Pamukkale, a health tourism destination that is also listed on UNESCO's World Heritage list, is on the rise as medical centers work on projects with tourism agencies and related ministries.
by Betül Alakent Apr 20, 2016 12:00 am

Motivated by the considerable decline in the number of Russian tourists following the military jet downing crisis, hospitals and tourism operators decided to work together to promote health tourism to wealthy tourists

The Turkish Healthcare Tourism Development Council, driven by Russia's endeavors to deter its citizens from visiting Turkey after its military shot down a Russian fighter jet, has made a significant move to attract health tourists to the country to prevent revenue losses in the sector. The move was made considering the fact that tourism professionals, who generate $900 on average from Russian tourists, earn $10,000 on average from each medical tourist.

The council will bring together more than 100 tour operators affiliated with the Association of Turkish Travel Agencies (TÜRSAB) and the managers of 15 leading private hospitals at a meeting on May 25. The meeting will address ways to attract foreign patients to Turkey with the help of tour operators' connections abroad. The meeting, which offers a win-win negotiation for both tourism professionals and hospital managers, also aims to prevent the revenue losses that the Turkish tourism sector has been experiencing due to the diplomatic spat with Russia. Sharing the particulars of the meeting, Healthcare Tourism Development Council President Emin Çakmak said that small- and medium-sized travel agencies cannot benefit from the state subsidy of $6,000 that will be granted to travel agencies bringing in 400,000 or more tourists a year. "We will hold an integrative meeting so that small- and medium-sized travel agencies make up for their losses and increase the number of healthcare tourists in Turkey through their strong connections with foreign countries," he said.

Çakmak also said that the tourism sector lost 30 percent in revenue in January, February and March because of the visa obligation that was imposed on Libyan and Iraqi nationals, who had previously brought a significant portion of revenues in medical tourism.

Referring to the fact that the Foreign Ministry has launched a special formula to ease visa obtainment procedures for foreign patients who visit Turkey for treatment, Çakmak said such tourists can handle the visa process through the Health Tourism Council, the Association of Private Hospitals and the Association of Private Universities. According to Çakmak, the number of healthcare tourists visiting Turkey reached 746,000 and the revenue they brought in reached $5.8 billion in 2015. A total of 60 percent of these tourists came from the Middle East, North Africa and the Gulf region; 20 percent from Central Asian republics and the remaining 20 percent from Europe and other countries. He said the sector expects a 15 percent rise in the number of healthcare tourists this year.

Ethica Health Group Chairman Murat Akdoğan said the number of foreign patients who received treatment at the group's hospitals grew 30 percent and exceeded 4,000 in 2015. The group grew 20 percent in terms of the number of healthcare tourists in the first three months of 2016 compared to the same period last year. It expects the number of foreign patients it treats will exceed 10,000 over the next five years. The group also plans to establish hospitals in Bulgaria, Kiev, Kuwait and Qatar.

Alp Aslan, the owner of the Este surgery clinic that was founded in 2007, said the hospital grew 15 percent annually on average, adding that they expect to achieve the same growth this year. A total of 70 percent of the clinic's patients come from European countries for all kinds of plastic surgery, including hair transplant and skin rejuvenation. The clinic, which provides service to around 700 foreign patients a year, will invest $10 million to open a new 1,000 square-meter medical center this year.
RELATED TOPICS