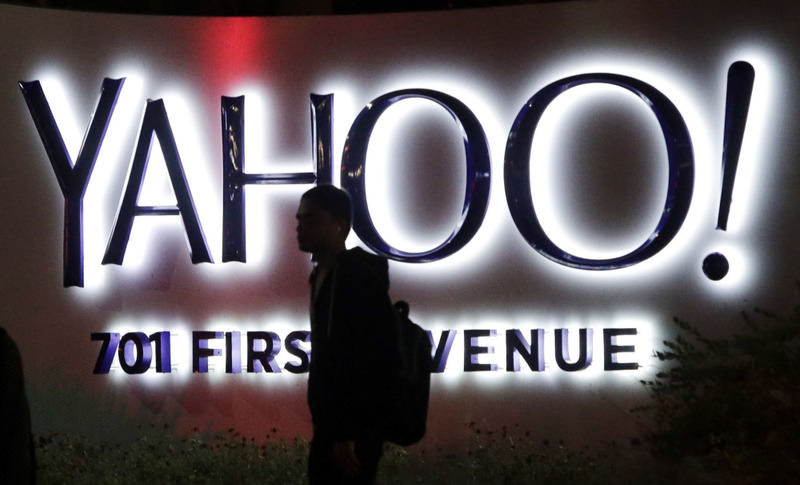 Bloomberg News, also citing unnamed sources, said Verizon Communications is now vying for Yahoo's core business against at least two other bidders: TPG, a private equity firm, and YP Holdings, the online advertising business of what was previously called Yellowpages.com. The parent group behind British tabloid Daily Mail, Daily Mail and General Trust, revealed last week that it was in talks with "a number of parties" over a potential bid for Yahoo but it is unclear if the negotiations resulted in an offer. Although Yahoo is one of the best-known names on the Internet and is used by around one billion people, it has fallen behind Google in web searches and has been steadily losing ground in online advertising.

The status of bidding for Yahoo's core business is expected to be among questions fielded by Yahoo chief executive Marissa Mayer during a briefing after the first-quarter results are released later in the day. BGC Partners analyst Colin Gillis questioned to what extent lackluster earnings would ramp up shareholder pressure on the company to sell assets or overhaul management. While the online advertising industry is booming and Yahoo has spent billions of dollars on acquisitions, it is poised to post revenue declines, according Gillis.

"That's not a very good scorecard," he said. "That's the problem, and the company's strategy is three years into this."

Earlier this year, the company opened the door to a sale of its core operations at the same time that it was pursuing Mayer's efforts at revitalization. But some shareholders are impatient, and one activist investment group has launched a bid to gain control of the Yahoo board, calling the transformation efforts a failure.

While some buyers might be interested in Yahoo's core web business or parts of it, others may bid for its valuable stakes in Alibaba or Yahoo Japan. Mayer joined Yahoo in mid-2012 as chief executive from Google, a result of a proxy war launched by an activist investor group.

While Mayer has injected some energy and glamour into the company, Yahoo's finances have failed to improve and its core operations are valued in the market as worthless, with the company's valuation propped up by its stakes in Alibaba and Yahoo Japan.

In February, Yahoo said it was cutting 15 percent of its workforce and narrowing its focus as it explored "strategic alternatives."

Yahoo, as well as Verizon and others reported to be considering bidding, declined to comment.

Mayer has made priorities of what she refers to as "Mavens" -- mobile, video, native advertising and social media. Industry tracker eMarketer forecast that digital ad revenue taken in this year at Yahoo will fall nearly 14 percent to $2.83 billion while money raked in by Silicon Valley rivals Google and Facebook will rise.
RELATED TOPICS