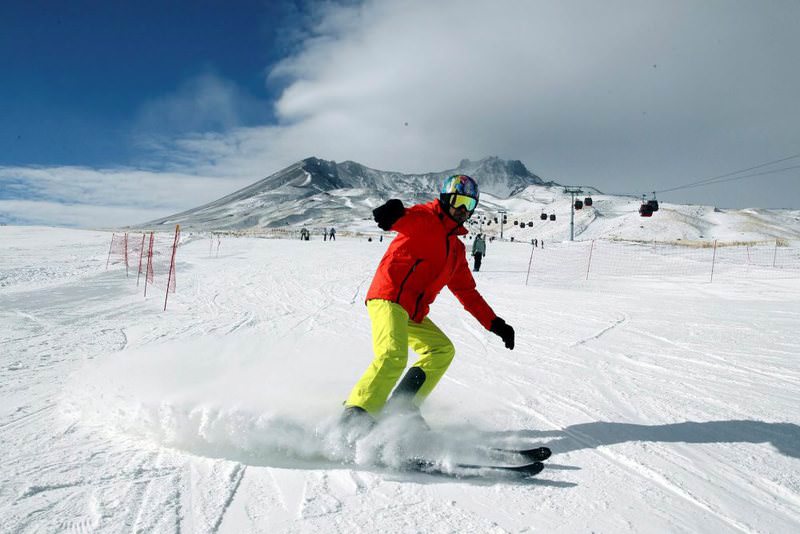 by Daily Sabah Apr 25, 2016 12:00 am
One of Turkey's most important skiing centers, Erciyes, is on its way to becoming the Turkish "Alps" with the Kayseri Metropolitan Municipality's Erciyes Winter Sports and Tourism Center project. Along with its cloud-penetrating peak and permanent snow cover, 3,917-meter-high Mount Erciyes is the most important symbol in the region and has become one of the world's leading skiing centers with the 200 million-euro investment in the project.

Following the Metropolitan Law put into effect in 2005, Erciyes was included within the borders of the Kayseri Metropolitan Municipality, helping to establish the Erciyes Winter Sports and Tourism Center project.

Five old, non-functioning mechanical facilities in Erciyes were demolished and replaced by 18 new mechanical facilities with the latest technology and high-level security. While the rope length of the facilities was limited to 7,370 meters before, the length was tripled to 21,300 meters when the project started. After consulting the world-famous Austrian Tourism Consultant Company, the municipality registered the 26 million-square-meter area of Mount Erciyes. Afterward, the work and mechanical facilities required to make Erciyes one of the world's top skiing centers were designed, and the municipality completed infrastructure work on roads, natural gas, electricity, water and communications. Erciyes also received 150 artificial snow machines, as it did not have any before. With the snow machines, the tracks were made ready for skiing by producing artificial snow on the 2-million-

square-meter area above Mount Erciyes. Such machines also made it the first center opening the skiing season this early in the past five years. Skiing is not possible anymore with natural snow due to climate change -- not just in Turkey but in favorite skiing centers in Europe, so the skiing season was extended via artificial snow units.
RELATED TOPICS