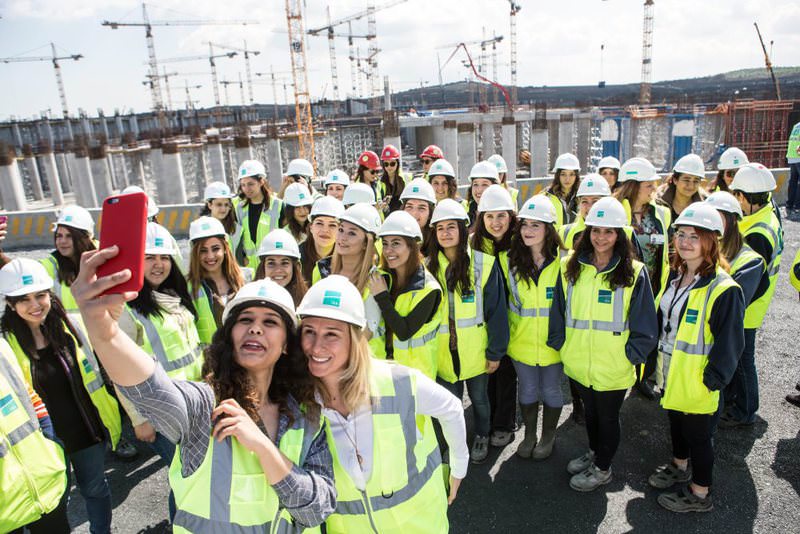 by Şelale Kadak May 04, 2016 12:00 am
Stressing that 17 percent of the white collar professions working on Istanbul's third airport are women, Limak Investments Chairperson Ebru Özdemir said, currently, 162 female engineers and architects were working on the airport - a record-breaking number.

It is not possible to understand the growth of the construction area without seeing it. In order to see the entire construction area of Istanbul's new airport, which broke ground a year ago, a helicopter is needed. More than 14,500 people are working on the airport, which will be the world's biggest airport when its first stage is completed in 2018 and a capacity of 90 million passengers before it is further expanded. The endeavor in progress includes the use of 2,200 trucks, 252 excavators, 60 tower cranes, 57 graders, 124 cylinders, 101 bulldozers, 60 articulated trucks, 23 mobile cranes, 70 concrete mixers and 18 concrete pumps. The airport will have a capacity of 90 million passengers in the first stage. While 4 percent of the 14,500 blue-collar employees on the construction site are women, 17 percent of the white-collar employees are women.

Emphasizing that the number of female engineers was unexpected for some due to the heavy construction works, Ebru Özdemir said according to scientific studies, women think in a multidimensional, critical and analytic way with a strong aesthetic dimension.

IGA Istanbul Grand Airport Human Resources Director Demet Gürsoy said the female engineers were more successful in the field, and infrastructure and superstructure directors asked for more female engineers. Gürsoy also stressed that women were excited to work in the field. The company formed a unit in order to conduct a study about whether the project is disturbing the people living in the area, which will be run by a female director, Elçin Berberoğlu. According to Gürsoy, the people living in the surrounding villages are pleased with the construction, and every stage is critically monitored. The percentage of the negative responses was only 2 out of 1,000.

According to 30-year-old architects and engineers, it is a great opportunity for them to work on the construction of the world's biggest airport, and despite the hardships in the field, they love their jobs.

The IGA, founded by the bidding consortium, conducted a comprehensive Environmental Impact Assessment Report in order to end disputes regarding the environment impact. The first person who was hired by the company after the CEO is a sustainability director, Ülkü Özeren, who is responsible for overseeing environmental issues.

Gender equality is a universal priority for UNESCO. Women are asked to be a part of the decision making processes. Except for a few countries such as Norway, however, no country excels at this. UNESCO reports indicate women who work as scientists fall behind men in many fields such as physical sciences and engineering. That is why companies taking steps to empower women attract attention, such as Limak Investments Turkey's Engineer Girls project.
RELATED TOPICS