CEO pays climb again, even as stock prices do not 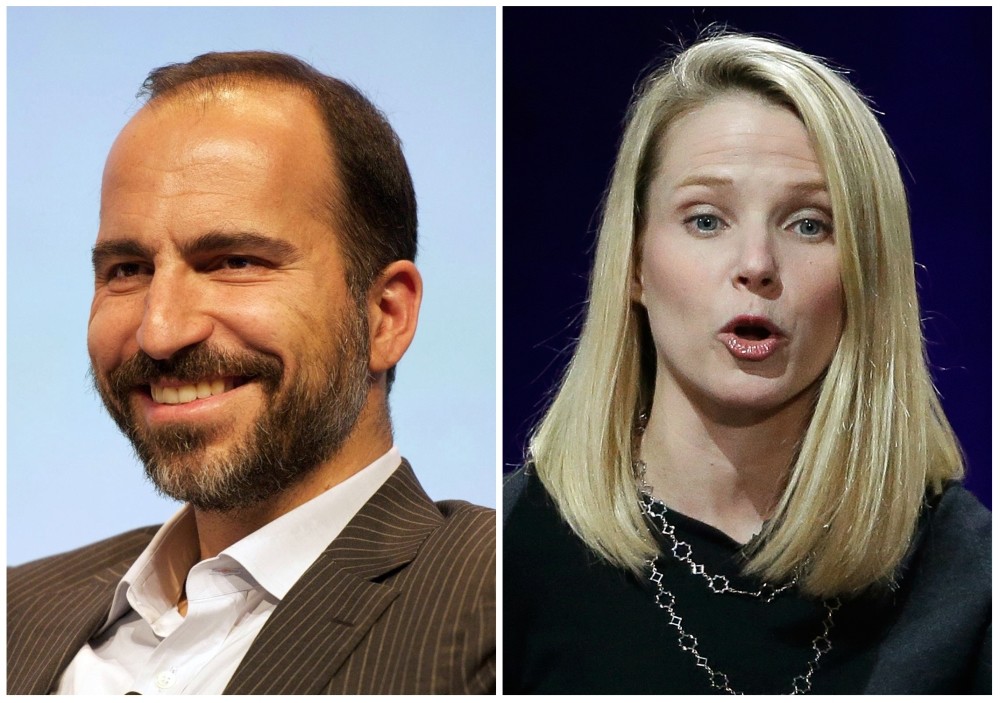 Dara Khosrowshahi (L) - Marissa Mayer
by Associated Press May 27, 2016 12:00 am
CEOs at the biggest companies got a 4.5 percent pay raise last year. That's almost double the typical American worker's, and a lot more than investors earned from owning their stocks -a big fat zero. The typical chief executive in the Standard & Poor's 500 index made $10.8 million, including bonuses, stock awards and other compensation, according to a study by executive data firm Equilar for The Associated Press. That's up from the median of $10.3 million the same group of CEOs made a year earlier. The raise alone for median CEO pay last year, $468,449, is more than 10 times what the typical U.S. worker makes in a year. The median full-time worker earned $809 weekly in 2015, up from $791 in 2014. 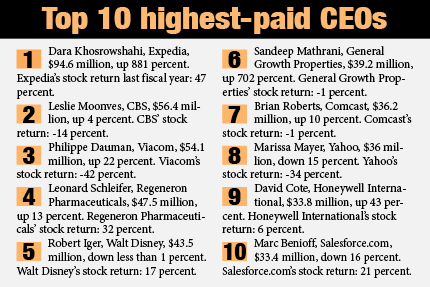 "With inflation running at less than 2 percent, why?" asks Charles Elson, director of the John L. Weinberg Center for Corporate Governance at the University of Delaware. The answer is complicated. CEO pay packages now hinge on multiple layers of sometimes esoteric measurements of performance. That's a result of corporate boards attempting to respond to years of criticism about excessiveness from Main Street America, regulators and even candidates on the presidential trail this year.

One bright spot, experts say, is the rise in the number of companies that tie CEO pay to how well their stocks perform. "There's progress generally in aligning compensation with shareholder returns," says Stu Dalheim, vice president of governance and advocacy at Calvert Investments, whose mutual funds look for socially and environmentally responsible companies. "But I don't think this compensation is sustainable long term, because the U.S. population is increasingly focused and aware of the disparity."

More than half the median compensation of CEO pay is coming from stock and options, rather than cash. And companies are increasingly meting out those stock and option awards based on performance. About a quarter of CEO incentive awards in the S&P 500 use total shareholder return as one of their measurements of performance. That's more than double the percentage from three years earlier. Companies also use familiar measurements like revenue and wonkier ones like return on invested capital.

The top-paid CEO in this past year's survey, Expedia's Dara Khosrowshahi, made $94.6 million last year. Most of that came from stock options, which came as part of a new five-and-a-half-year employment agreement and which vest over several years.

Scrutiny has been increasing on CEO pay, and many Americans say they feel left behind in the economy even though the Great Recession technically ended nearly seven years ago. Anger is high. Nearly three quarters of Americans believe CEOs are paid an incorrect amount, relative to the average worker, according to Stanford University's Rock Center for Corporate Governance. And that's even though most Americans severely underestimate how much CEOs make. The typical American believes big-company CEOs average $1 million in pay.
RELATED TOPICS