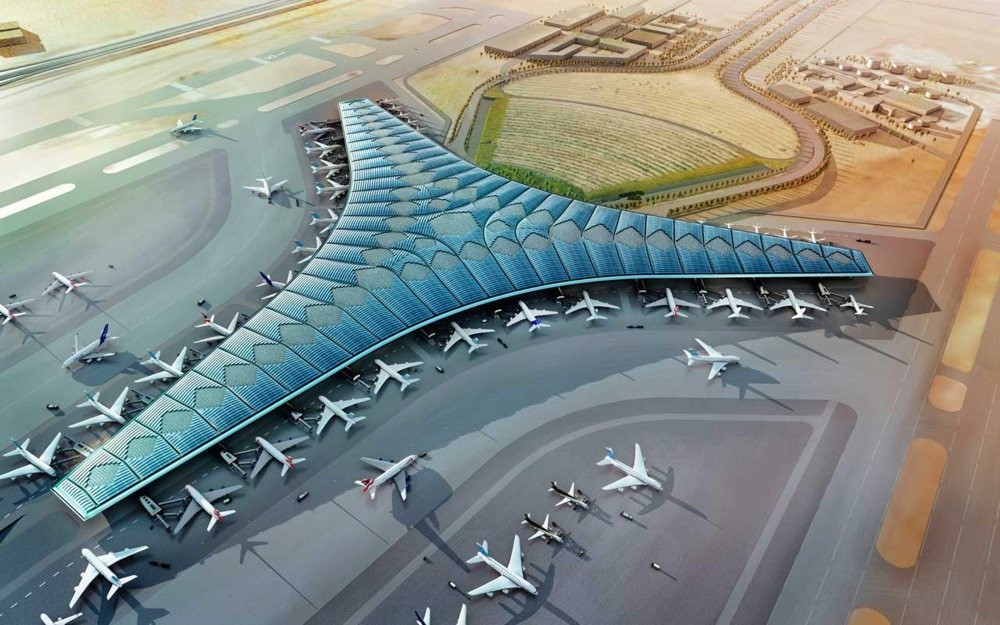 Turkey-based construction firm Limak Holding signed an agreement worth of $4.3 billion for building a terminal for Kuwait International Airport, which will be a first with sustainable LEED Gold certificate and carry 25 million passengers

While Turkish firms are building around the world, Istanbul's new airport's contractor Limak Holding will set the bar higher with a new project in Kuwait building the "golden" airport. Limak Holding signed a $4.3 billion agreement to develop a terminal building for Kuwait International Airport. It will be the world's first airport with the sustainable LEED Gold certificate, and is projected to be able to carry more than 25 million passengers. Designed by Pritzker-winning architectural firm Fosters + Partners, the airport will be Kuwait's landmark with an iconic structure. Stating that it will be a six-year fixed price project, Limak Holding Vice Chairman Sezai Bacaksız said: "We have a certain margin, but completing such a prestigious project is the biggest profit for us. Undersigning such an art piece is the biggest success as long as we do not suffer a loss." President Recep Tayyip Erdoğan is expected to break ground for the airport with a ceremony in October.

Limak Holding won the auction for the construction of the new terminal building with a bid valued at 1.315 billion Kuwaiti dinars ($4.3 billion). Limak Holding Vice Chairman Sezai Bacaksız and Kuwaiti Public Works Minister Ali el-Amir signed the project on May 31. Minister Amir said the whole budget of the project would be met by the government, and the 25-passenger capacity airport would be completed within six years. Speaking at the signature ceremony, Limak Holding Vice Chairman Sezai Bacaksız stated that they were honored to win the project. "This project will be a bridge between two friendly countries and two big economies such as Turkey and Kuwait. This bridge will both increase the technology trade and provide the basis for new collaborations. Local businesses will improve."

Speaking of hardships in the contracting sector, Bacaksız told some success stories from risky countries, in particular a tunnel project in Northern Iraq and road construction in Afghanistan. Stating that they were always on the frontline, Bacaksız added: "There is always excitement and adrenalin in the contracting sector. We never said we have enough money, let's stop. We are on the front lines like war reporters. We need to work non-stop, even if bombs explode."

Stressing that they had beaten many firms, the Chinese in particular, by giving the lowest bid at the auction, and the auction was a tight, four-year race, Bacaksız said their bid was $4.7 billion and the Chinese bid was $800 million higher. "They called us to give our best offer two years later. The Chinese reduced their number, but it was again $66 million more than our offer. A tough test started after the bidding. They interrogated us. A team of 25 people came to Kuwait for our presentation. The ministry formed a committee, we were tested. When they said it was impossible to accomplish it, we said we would do it. They were convinced, and they found our method doable and gave us the job."

While examining the new airport area in Kuwait, Sezai Bacaksız said nearly 20,000 people would be employed in total during the project construction. Stating that 5,000 people would be employed annually in the project, Bacaksız said nearly 500-750 personnel would be brought from Turkey for the first stage, and the number of Turkish workers might increase if the non-Turkish workers were not sufficiently productive. Stating that Kuwait International Airport would be the first airport with a LEED Gold certificate, Bacaksız continued: "It will be the first airport with an environmental accreditation at this level. The ongoing San Francisco Airport is currently the only one expected to get a LEED Gold certificate. The roof of the terminal building will be very different and it will symbolize Kuwait. Some 66,000 solar panels placed on the roof of the terminal building, located on a 700,000 square meter construction area, will produce 12 MW of power." Stating that it would be the biggest job yet undertaken by the Turkish contracting sector, Bacaksız said the signed contract was a success for the sector.

Stressing that they had undertaken a very difficult project, Bacaksız said it would be one of the world's most beautiful airports, and they wanted to show the world that Turks could handle the most difficult of tasks. The terminal area will cover 780,000 square meters. It will initially have 51 gates and will be able to serve 21 A-380s at the same time. It was designed in accordance with International Air Transport Association's (IATA) service standards. The project will require more than 1 million cubic meters of domestically-obtained concrete and over 100,000 tons of structural steel. The design of the building will keep heat out and the whole building will share one roof, with glazed openings enabling light to come in. The roof will provide shadow for the entrance plaza, supported by concrete columns which gradually decrease and are designed inspired by Kuwait's traditional sailing boats.
RELATED TOPICS