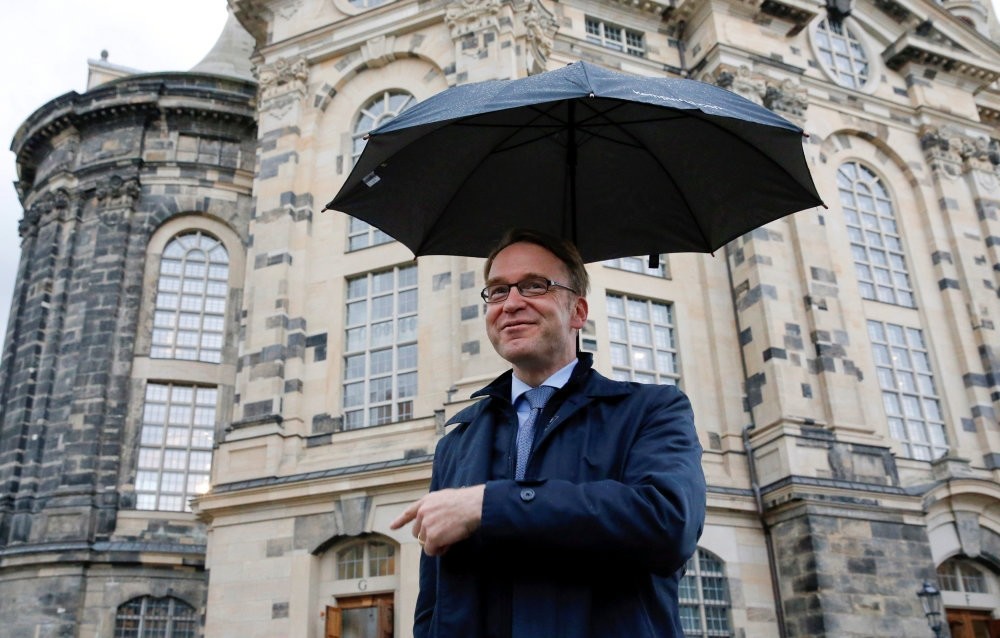 Germanyu2019s Deutsche Bundesbank President Jens Weidmann gestures in front of the Frauenkirche cathedral in Dresden. On Friday, the bank cut its growth forecast for German economy from 1.7 to 1.4 percent this year.
by Jun 04, 2016 12:00 am

The central banks of the eurozone's two biggest economies, Germany and France, revised their growth forecasts downward. While German growth forecast is down from 1.7 to 1.4 percent this year, France cut its forecast to 1.5 from 1.6 percent for 2017

Germany will grow at a slightly slower pace than previously expected, its central bank (Bundesbank) predicted Friday, cutting its forecasts for Europe's top economy. The central bank of neighboring France also turned more pessimistic on the growth outlook for the eurozone's second-biggest economy. The Bundesbank said the powerhouse German economy would expand 1.7 percent this year, slowing to 1.4 percent in 2017. This is a downgrade from previous forecasts of 1.8 percent and 1.7 percent, respectively.

Nevertheless, the bank's head, Jens Weidmann, said the German economy stood on a "relatively firm" footing. The bank said it expects the economy to grow 1.8 percent in 2018. Exports, long the bedrock of the German economy, are only providing a "limited" push, but "should pick up" in coming years, Weidmann predicted. The latest forecast brings the central bank into line with the German government's 2016 forecast, which is slightly more optimistic than the International Monetary Fund with a 1.5 percent growth estimate and German economics institutes that expect 1.6 percent. Inflation is expected to remain subdued this year, the Bundesbank said, with consumer prices rising just 0.2 percent, accelerating to 1.5 percent next year and 1.7 percent in 2018.

The Bank of France also reiterated its earlier 1.4 percent growth forecast for this year, but cut its outlook for 2017 to 1.5 percent from 1.6 percent. Growth of 1.6 percent would now only be achieved in 2018, it said. The central bank said the international environment had become "less favorable" for French growth and also cited expectations of higher oil prices as a negative factor for expansion. France's trade deficit, partly explained by a strong euro, was also weighing on gross domestic product (GDP), it said. Limited growth was expected to lead to an equally limited increase in jobs, with employment levels likely to rise by 0.7 this year and 0.6 percent next year, the Bank of France said.

The French unemployment rate, a key focus for President François Hollande's government, will ease to 10.1 percent this year from 10.3 percent in 2015, and fall below 10 percent only in 2018, the Bank of France predicted. The bank also called on the government to control its deficits with the aim of cutting debt, which stands at 96 percent of GDP, vastly higher than the eurozone's 60 percent target.

Hollande's government has promised to reduce the public sector deficit to 3.3 percent this year before bringing it below the Eurozone's three-percent limit in 2017 to 2.7 percent. Meanwhile, Eurogroup Chief Jeroen Dijsselbloem criticized the European Commission in remarks published Friday for being too lenient with France concerning fiscal rules.

"If the commission is only strict with smaller countries and unable to be strict on larger countries, that would be devastating for the confidence we have in our cooperation," he said in an interview with several European newspapers, including Britain's The Guardian. He was referring to reported remarks by European Commission President Jean-Claude Juncker that France won a two-year reprieve on deficit targets "because it is France," while smaller countries have been under much more pressure. "You have to be a little careful if it is in your advantage that the commission turns a blind eye. ... In the end, if we turn a blind eye everywhere, we make a blind monetary union," Dijsselbloem said.

Asked about the comments Friday, European Commission spokesman Margaritis Schinas acknowledged that the EU exercises "political discretion" in its dealings with governments over deficits, but said the size of a country did not matter. " [Juncker] was very clear on many occasions that in applying the rules, the commission makes no difference whatsoever between small and big member states, something that is quite obvious for a former prime minister of Luxembourg," he said at a press conference.
RELATED TOPICS