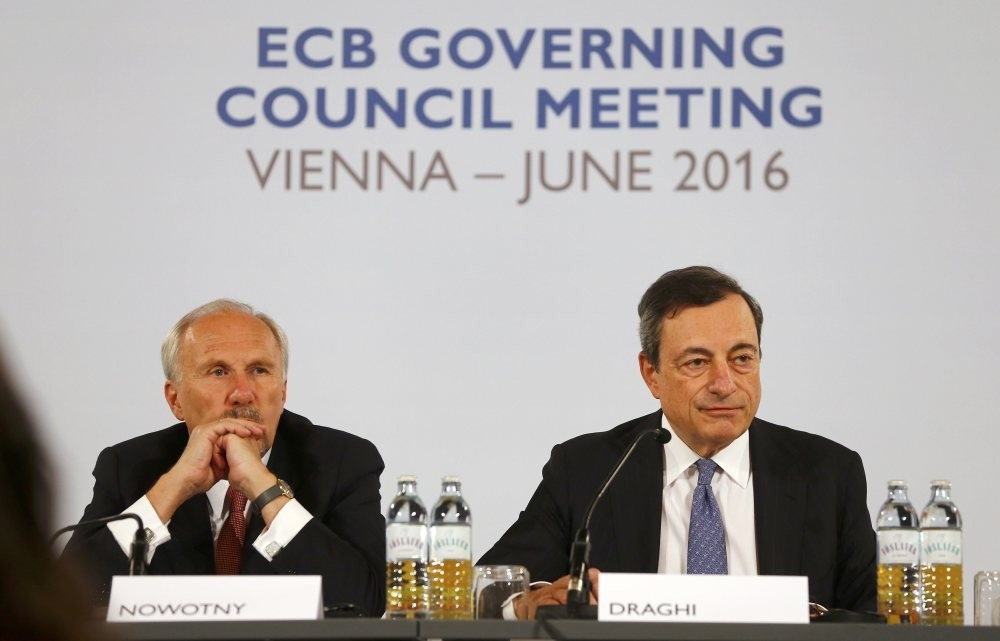 Governor of the Austrian National Bank And European Central Bank (ECB) Governing Council Member Nowotny (L) and ECB Governor Draghi at a news conference in Hofburg Palace in Vienna, Austria on June 2.
by Jun 09, 2016 12:00 am
The European Central Bank took a step into uncharted territory Wednesday when it bought bonds issued by companies, in a bid to kick start sluggish growth and inflation in the eurozone. With key interest rates already below zero and unprecedented ECB funds sloshing around, the bank will now cut out the banking middlemen and finance businesses either directly or by buying their debt in the bond market.

ECB chief Mario Draghi hopes this will help efforts to revive weak economic activity in the 19-country eurozone, many of whose members have fallen short of their growth targets. Any company headquartered or owning offshoots in the eurozone with a high credit rating will be able to tap the ECB for cheap financing, including auto companies, pharmaceutical firms and airlines.

The Frankfurt-based bank, which has already been buying government-issued or sovereign bonds, will begin spending billions of euros every month on similar debt obligations from corporations. The hope is that the companies will use the money to invest, thereby stimulating growth, creating jobs and helping push up prices.

Slow eurozone growth has seen inflation slide into negative territory, threatening a dangerous downward spiral of falling prices and wages. The ECB aims to get inflation back to 2 percent or just below, a level it deems healthy for growth. To kick-start lending in the bloc, the ECB has made unprecedented amounts of cheap loans available to banks on condition they pass it on as credit for businesses and households.

The ECB has also embarked on a major asset purchase program known as quantitative easing, or QE. It has beefed up that scheme from 60 billion to 80 billion euros a month until March 2017, with part of the extra money earmarked for the new corporate bond purchases.

Under the so-called corporate sector purchase program, or CSPP, the central bank will buy euro-denominated, investment grade corporate bonds that mature within six months to 30 years. It will make the purchases through the national banks of Belgium, Finland, France, Germany, Italy and Spain. These six national central banks will publish lists of bonds they hold on a weekly basis, starting Monday July 18, without revealing the exact amounts of their holdings.

The ECB has said it won't buy bonds issued by banks or bank subsidiaries - but it can buy bonds of, for instance, a car company such as Volkswagen that operates an "internal bank."

The eurozone central bank has also said it will be able to hold on to bonds even if the companies' ratings are downgraded to sub-investment grade, so-called "fallen angels."

The market for corporate bonds is far smaller than for sovereign bonds or for stocks. European businesses usually rely mainly on bank loans rather than bonds to raise capital.

French companies, more likely than others in Europe to be financed on the bond market, may benefit most from the new largesse, followed by Netherlands-based companies. Many analysts are betting on a monthly volume of 5 to 10 billion euros, while Germany's Commerzbank expects just 3 to 5 billion euros in the long term.

The ECB "might start slow instead of entering the market with guns blazing," it predicted in a note. The total volume of eligible bonds is estimated at 500-700 billion euros. Companies have issued a flurry of bonds since Draghi announced in March that the ECB would intervene in the corporate bond market, a first on this scale for a large central bank.

Early spring saw the biggest euro-denominated corporate bond issue of all time by the brewer AB Inbev, worth more than 13 billion euros, while U.S. companies like FedEx and IBM have issued bonds through their European subsidiaries. Still, despite fears the ECB intervention would distort the market, Unicredit analysts have predicted that the "impact will be very limited."
RELATED TOPICS