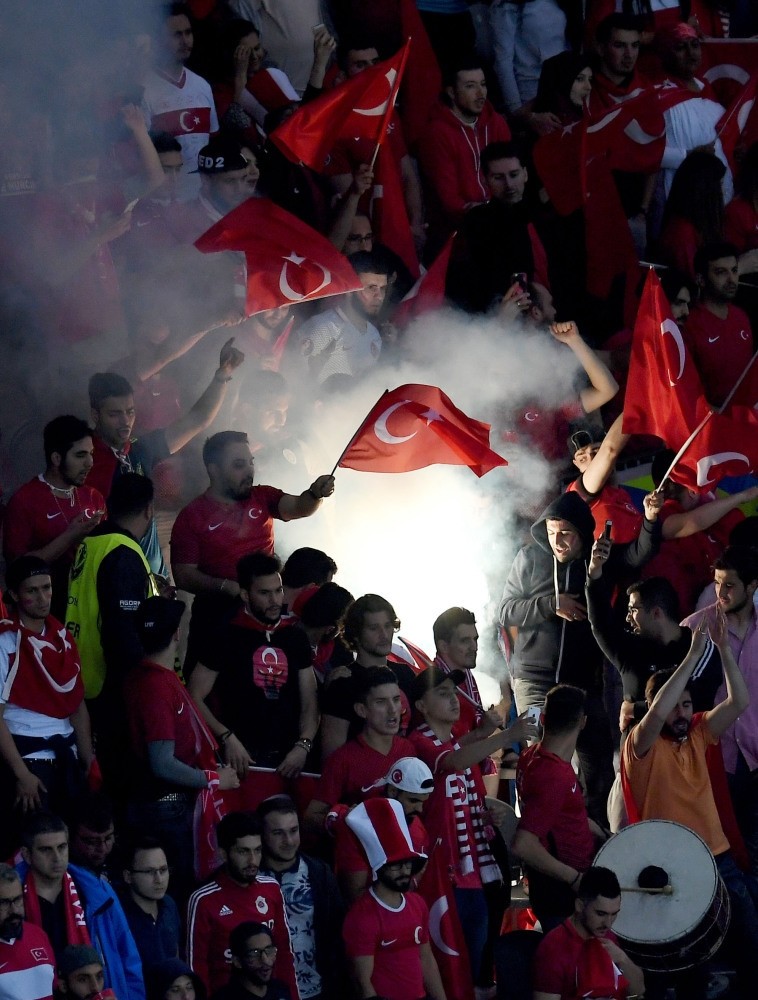 Supporters of Turkey light a flare during UEFA EURO 2016 group D preliminary round match between Czech Republic & Turkey at Stade Bollaert-Delelis in Lens, France, on Tuesday. World sports market is expected to reach $100 billion by 2018.
by Daily Sabah Jun 23, 2016 12:00 am
As the passion for sports grows around the world, the sports economy is set to reach $100 billion a year, outperforming the national income of 130 countries.

According to AT Kearney management consulting firm data, the sports market, consisting of ticket sales, media rights and sponsorships, should rise to $88 billion this year from $46.5 billion in 2005. The industry should reach $91 billion next year and $100 billion in the following years. It is striking that the size of the sports industry - nearly $100 billion a year - exceeds the national income of 130 countries, including Bulgaria, Tunisia, Slovenia, Estonia, Malta and Kenya, according to World Bank data. Emre Katı, an AT Kearney manager, said that football constitutes more than 80 percent of Europe's sports economy, adding that American football, baseball and basketball correspond to 90 percent of the sector in North America. He noted the football market roughly consists of ticket sales, media rights and sponsorships, stressing that the share of the three vary by country, with sponsorships, media rights and ticket revenues having the largest share, respectively.

Pointing out that spending on sports grows in Europe, Katı said that the rate of increase in sports expenditures is four times greater than the rate of increase in national income in the U.K., and this figure is more than three times bigger in France. According to Katı, when sports equipment, licensed products and the potential of health and fitness centers are considered, the total sports industry nears $600 billion. He said: "This figure is roughly equivalent to 1 percent of the world's total income. The market, including licensed sport equipment, such as sportswear and shoes, reached $310 billion. The market size of sports centers, including fitness clubs, yoga lessons and personal training, stands at $105 billion. The market size of grey areas, such as infrastructure construction, food, drinks and betting, varies between $100 billion and $200 billion."

Sabahattin Devecioğlu, an associate professor in the Faculty of Sports Sciences at Fırat University, said the sports market developed with the Industrial Revolution, adding that scientific and technological developments in today's knowledge era have changed the dimensions of the market. He pointed to the fact that online shopping and technological developments have facilitated access to sports equipment and organizations.

Pointing out that the economic size of the 2014 World Cup reached $11 billion in Brazil, Devecioğlu stated the budget for the 2016 Rio Olympic Games, in which 206 countries will participate, increased to $13.2 billion from an initial $2.93 billion. Of this amount, 57 percent is covered by the private sector. The Olympic Games are expected to contribute 3 percent to the Brazilian economy.

According to Devecioğlu, nearly 300 million people are expected to watch the final match of EURO 2016 on television, bringing 1 billion euros in revenue via media rights. Considering that EURO 2016's champion team wins 24 million euros, EURO 2016 alone is enough to reveal the size of the sports economy, he concluded.
RELATED TOPICS