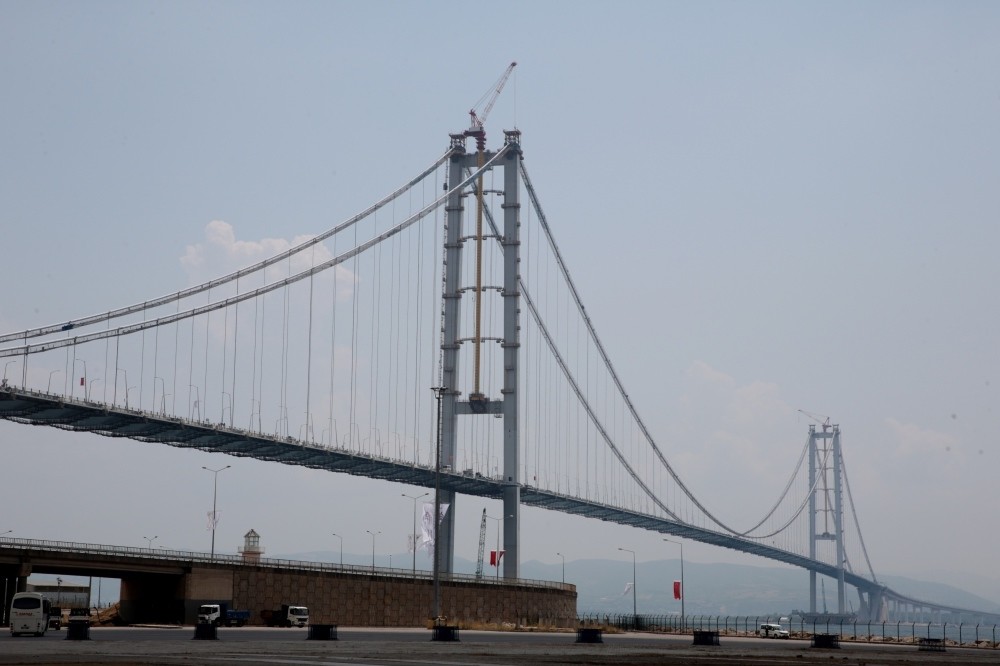 Completed after 39 months of construction, the Osman Gazi Bridge, which will be the world's fourth-longest suspension bridge, opens today with a ceremony attended by President Recep Tayyip Erdoğan and Prime Minister Binali Yıldırım. The bridge is the largest part of the Gebze-Orhangazi-İzmir Highway Project, which will reduce the duration of travel between Istanbul and İzmir from nine to three-and-a-half hours. It aims to decrease the over concentration of industrial operations in Kocaeli's Gebze and Dilovası districts. The bridge will have the largest central span in the world.

Thanks to the bridge, which will connect Yalova and Kocaeli, the travel time between the two sides of the Gulf of İzmit is expected to be reduced. Dilovası District Governor Harun Şahin said the bridge's opening will be a significant moment in world history. Stressing the bridge's positive effects on the region, Şahin pointed out that housing and land prices had increased in Dilova, which has the best view of the bridge.

The construction of the bridge started in 2013, and the 433-kilometer motorway is expected to provide a direct connection from Istanbul and its surrounding provinces to the third and fourth largest cities in Turkey, İzmir and Bursa, respectively. Speaking about the megaproject, Erdoğan has previously said: "It will be among the first of Turkey's 2023 [vision] projects to be completed." Numerous other megaprojects, such as Istanbul's third airport, are expected to contribute to the country's 2023 vision, a set of goals to be reached by Turkey for its centennial celebrations.

The Osman Gazi Bridge is the biggest part of the Gebze-Orhangazi-İzmir Highway Project and will shorten the distance between Istanbul and İzmir by roughly 140 kilometers, bypassing the Gulf of İzmit. Constructed under the build-operate-transfer model, the Gebze-Orhangazi-İzmir Highway, including the İzmit Bay Bridge, will include 384 kilometers of highway and 49 kilometers of access roads.

The project began with an interchange (2x5 lanes) that was built 2.5 kilometers after the Gebze Interchange on the Anadolu Highway, and ending at the Otogar Intersection on the İzmir Highway. The bridge reached a height of 252 meters and the bridge deck is 25.93 meters long, with a main span length of 1,550 meters. Totaling 2,682 meters, the İzmit Bay Bridge has the fourth largest main span in the world. The installment of the bridge was completed at the end of April and the bridge is opened to traffic today, following isolation and asphalt application.
Last Update: February 02, 2020 21:11