Danone aims for organic top spot with US takeover 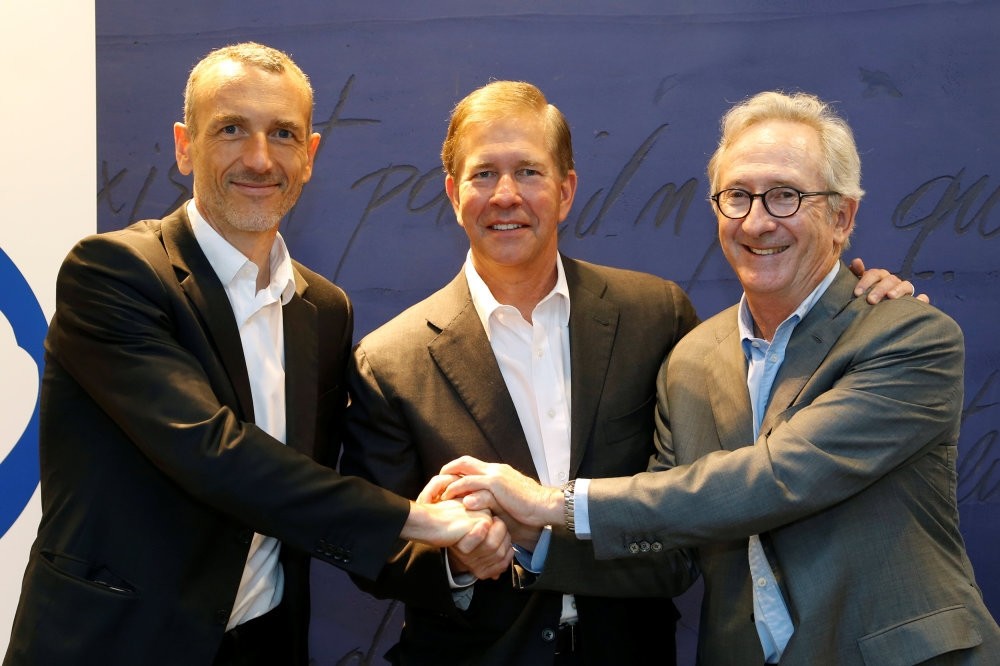 From L-R, Emmanuel Faber, CEO of Danone, Gregg Engles, CEO of WhiteWave Foods Company, and Franck Riboud, Chairman of French food group Danone, pose before the start of a news conference in Paris. (Reuters Photo)
by Jul 08, 2016 12:00 am
French dairy giant Danone said yesterday that they had agreed to buy U.S. organic foods producer WhiteWave Foods with a view to becoming a world leader in organic produce. The all-cash transaction values the U.S. company at $12.5 billion (11.3 billion euros) and will allow Danone to double its business in the U.S., the French group said in a statement, adding it expected to finalize the deal by the end of the year.

"Our perfect complementarity will allow us to create a uniquely-positioned organic world leader," CEO Emmanuel Faber said in a conference call. The board of directors of both companies unanimously approved the deal, Danone said.

WhiteWave produces a range of organic dairy products and plant-based dairy alternatives, achieving sales of $4 billion in 2015 including such products as Silk milk and Earthbound Farm organic salad. Since their stock market flotation in 2012, WhiteWave has generated an annual increase in operating profit of 20 percent, Danone said. The French company said the deal would allow it to tap into consumer trends "for healthier and more sustainable eating and drinking options. Organic foods and beverages and non-GMO plant-based alternatives to milk and yogurt are among the fastest growing categories in the industry."

Dairy products are already a core business for Danone, which employs 100,000 people worldwide and generated $22.4 billion of sales last year. Its portfolio also includes baby food and water. Faber said, "The value-creation profile is strong. We will contribute 100 years of research and development into protein fermentation, which will be combined with WhiteWave's transformation know-how."

Danone said it had offered to pay $56.25 per share "representing a total enterprise value of approximately $12.5 bn." It said the takeover will be financed entirely by debt. The deal, which is expected to produce annual synergies of $300 million by 2020, has yet to be endorsed by WhiteWave's shareholders and by competition authorities.
Last Update: Jul 08, 2016 1:06 am
RELATED TOPICS