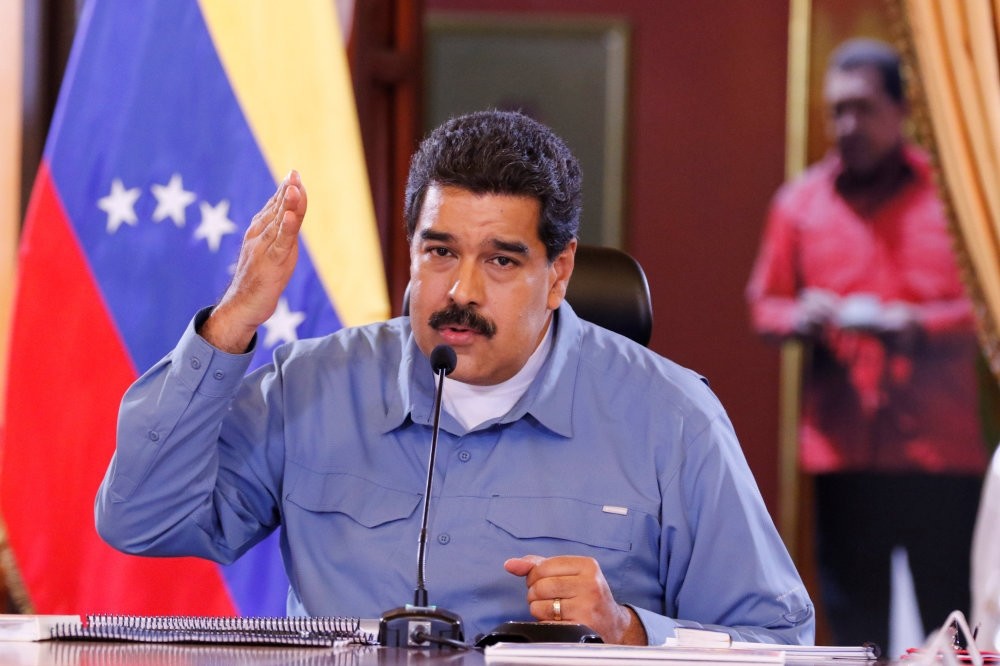 Venezuela's President Nicolas Maduro speaks during a Council of Ministers meeting at Miraflores Palace in Caracas.
by Compiled from Wire Services Jul 13, 2016 12:00 am

Venezuela's President Nicolas Maduro said on Monday that Citibank NA, planned to shut his government's foreign currency accounts within a month, denouncing the move by one of its main foreign financial intermediaries as part of a "blockade."

"With no warning, Citibank says that in 30 days it will close the Central Bank and the Bank of Venezuela's accounts," Maduro said in a speech, adding that the government used the U.S. bank for transactions in the United States and globally.

"Do you think they're going to stop us with a financial blockade? No, gentlemen. Noone stops Venezuela."

Citibank, a unit of Citigroup Inc, could not immediately be reached for comment about the purported measure against Venezuela's monetary authority and the Bank of Venezuela which is the biggest state retail bank, according to Reuters. With the OPEC nation's economy immersed in crisis, various foreign companies have been pulling out or reducing operations. Critics say the socialist economics of Maduro and his predecessor Hugo Chavez have been a disaster for Venezuela, while the government blames its political foes and local businessmen for waging an "economic war" against it. Due to strict currency controls in place since 2003, the government relies on Citibank for foreign currency transactions.

Meanwhile, Venezuela's government said that it will seize a factory belonging to Kimberly-Clark Corp. after the U.S. personal care giant said it was no longer possible to manufacture in this crisis-wracked South American nation, according to AP. President Nicolas Maduro accused Kimberly-Clark of participating in an international plot to damage Venezuela's economy and said his socialist government would provide public funds to the workers at the plant.

Labor Minister Owaldo Vera said earlier that the government would take over the Kimberly-Clark factory at the request of the 971 workers who have occupied the plant that the company decided to shutter in central Aragua state. Kimberley-Clark announced on Saturday that it was suspending production in Venezuela because of a lack of primary materials, currency trouble and soaring inflation. The company made a number of hard-to-find staples in Venezuela such as diapers and face tissues.

"Kimberly-Clark will continue producing for all of the Venezuelans," Vera said in a televised statement from the factory surrounded by workers chanting pro-government slogans. The Irving, Texas-based company said Monday that it acted appropriately in suspending operations.

"If the Venezuelan government takes control of Kimberly-Clark facilities and operations, it will be responsible for the well-being of the workers and the physical assets, equipment and machinery in the facilities going forward," the company said in a statement. Kimberly-Clark joins Bridgestone, General Mills, Procter & Gamble and other multinational corporations in scaling back operations in Venezuela amid its economic crisis.
RELATED TOPICS