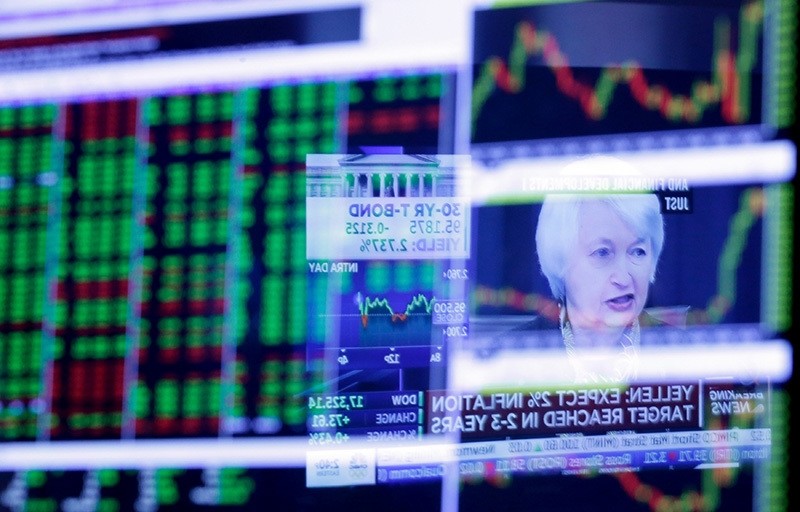 In this Wednesday, March 16, 2016, file photo, the Washington news conference of Federal Reserve Chair Janet Yellen is reflected in a specialist's screen on the floor of the New York Stock Exchange (AP Photo)
by French Press Agency - AFP Jul 27, 2016 12:00 am

The Federal Reserve is keeping interest rates unchanged while noting that near-term risks to the economy have diminished.

The Federal Reserve on Wednesday left key interest rates untouched but acknowledged improved economic performance, suggesting a rate increase may be on the horizon in 2016.

Policy makers had not been expected to raise rates, out of concern that a hike could stifle fragile growth.

Their improved view on economic conditions was therefore likely to raise market expectations for an increase in the benchmark federal funds rate, now at 0.25-0.50 percent, by December.

Despite weak job creation in May, the Federal Open Market Committee, which sets the monetary policy, said employment and economic growth had grown at a moderately since their mid-June meeting.

They also appeared to see less threat to US growth from Britain's vote to leave the European Union, which took place a week after the June FOMC meeting.

"Near-term risks to the economic outlook have diminished," the FOMC said in announcing the outcome of the closely watched two-day meeting in Washington.

Inflation rate hawks and doves had been split at the June meeting over how strong the economy was, and voted nearly unanimously to hold off on raising rates.

The Fed has repeatedly said it wants to see increasing job growth and signs of stronger inflation, before it raises rates.

While Wednesday's statement cited moderate increases and growth in employment and growth, it said inflation was expected to remain low in the near term.

According to Steven Ricchiuto, chief US economist at Mizuho Securities USA, continued job growth could tip the balance in favor of a rate hike.

This was likely given that the committee believes the risks to economic growth are now lower.

"This suggests that the countdown to a rate hike in September/December will start in earnest if we get another strong jobs report for July on August 5th," Ricchiuto said.

Following Wednesday's announcement, the dollar was slightly weaker against the euro at $1.1005.

Bond yields were also marginally lower. Ten-year Treasury bills were trading at 1.52 percent, down from 1.54 prior to the FOMC announcement.