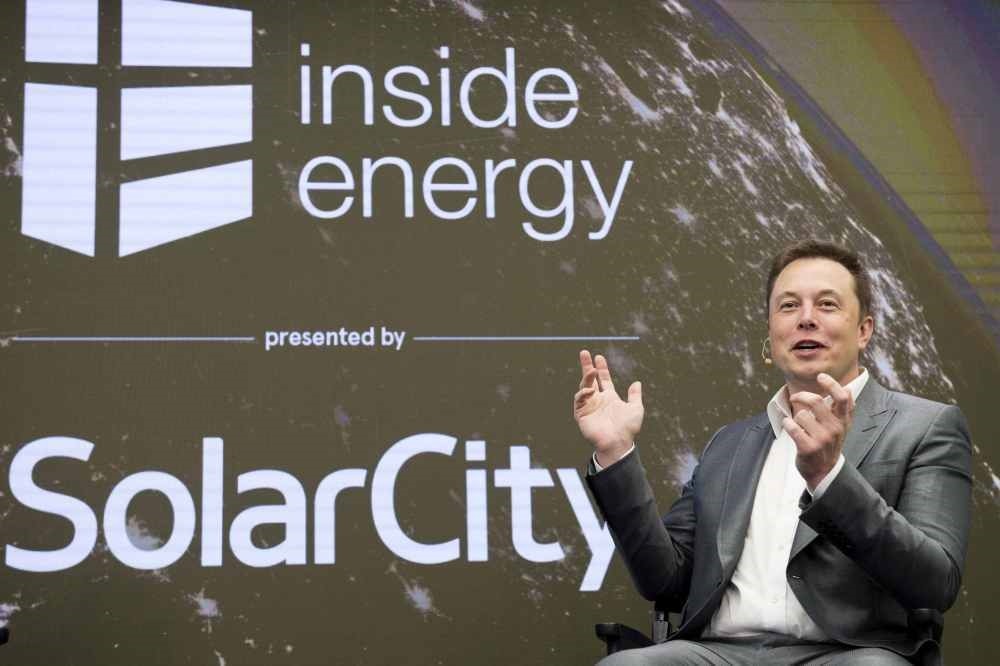 Elon Musk, CEO of SolarCity and Tesla Motors, speaks at SolarCity's Inside Energy Summit in New York last year. SolarCity built the most efficient solar panel in the industry for transforming sunlight into electricity.
by Aug 03, 2016 12:00 am

The deal will double Tesla's workforce to 30,000 and create a unique combination of solar power, storage and transportation, which would be the world's only integrated sustainable energy company

Electric carmaker Tesla said on Monday that an agreement had been won from SolarCity to acquire the solar power company for $2.6 billion, confirming a deal that has been criticized by Wall Street. Tesla announced the bid in late June, but it drew jeers on Wall Street, in part because of skepticism over the motives of Tesla chief executive Elon Musk, who is the chairman of SolarCity as well as its biggest shareholder.

Some analysts have questioned whether the deal - which still requires shareholder approval from both companies - would divert Tesla's attention from an ambitious plan to significantly expand electric-car production in the next few years.

But Tesla argued the combination would meet the needs of a growing portion of consumers who are environmentally-focused and drawn to the opportunity to buy their car from the same company that could install a solar-powered fueling station in their homes.

Tesla said in a statement that the buyout would enable it to achieve lower hardware and marketing costs and boost manufacturing efficiency, creating the "world's only vertically integrated sustainable energy company."

"There is natural parts integration here, where there isn't for gasoline and cars," said Musk. "You don't want the gas station at your house."

The all-stock transaction values SolarCity at $25.37 a share, below the original range discussed in June of between $26.50 and $28.50 a share. The agreement allows SolarCity to solicit alternative proposals for 45 days.

The boards of directors of both companies have signed off on the deal. However, the agreed acquisition requires approval from a majority of both companies' shareholders. Musk holds 21.1 percent of Tesla and 22.5 percent of SolarCity and will not be able to vote as a shareholder on the deal. Musk has announced an ambitious goal to produce 500,000 electric cars a year by 2018, which would take it from being a niche producer of luxury sedans to a mainstream competitor in the auto industry. Skeptics have questioned those targets.

While there is some strategic logic over the long-term, the deal likely dims the chances of Tesla turning a profit in the near term, he said. "If you're buying (Tesla) on the anticipation of it becoming profitable, or big-time profitable, in the next few years, this is going to set back your plan, if they ever become profitable," Levy said.

But Trip Chowdhry, an analyst at Global Equities Research, said Tesla's vision is to "create a whole new industry" akin to Amazon, which lost money for years. Profitability is not the most important factor in evaluating Tesla, he said.

"When you create an industry, you only win because of speed," Chowdhry said.
RELATED TOPICS