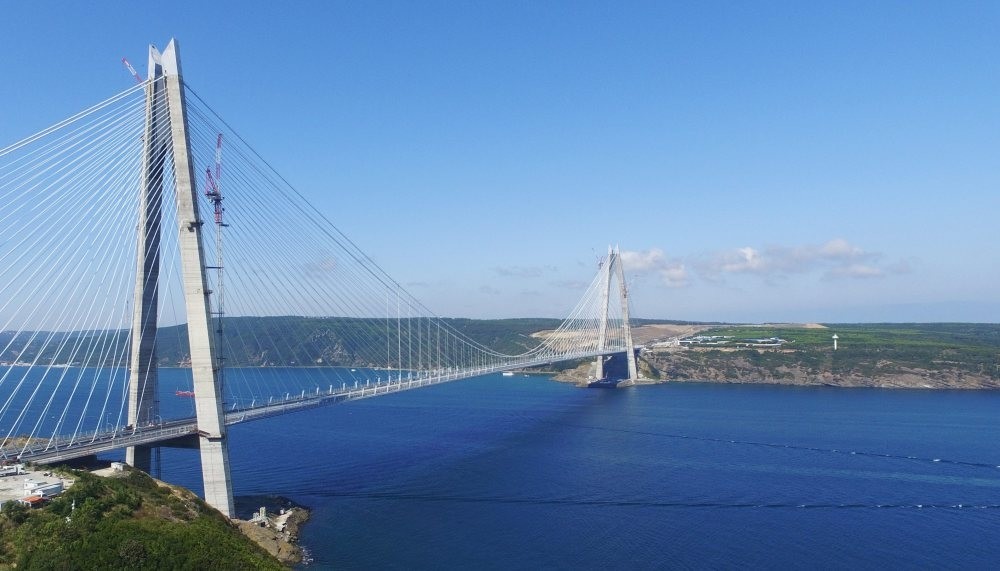 Completed in a 27-month time frame, the Yavuz Sultan Selim Bridge opens Friday in a ceremony attended by President Erdoğan and many other top officials. The bridge is one of the mega projects aimed at alleviating Istanbul's traffic problem

Construction of the mega project Yavuz Sultan Selim Bridge, which began on May 29, 2013, now unites the Asian and European sides of the Bosporus for the third time, with its official opening ceremony on Friday. Istanbul's third bridge Yavuz Sultan Selim costs nearly $3 billion and is a critical section of the Northern Marmara Motorway.

While last preparations for the opening of the bridge were being made, noting that the bridge was a magnificent work of art, Yıldırım said in his visit to the bridge in early August: "It is not just a bridge. It has eight lanes of motorway and two lanes of railway in the middle. Consisting of 10 lanes in total, it is the broadest spanning suspension bridge in the world. It is also the highest suspension bridge in the world, with the world's highest tower at a height of 322 meters." Pointing out that its design was different than that of the 15 July Martyrs' Bridge and the Fatih Sultan Mehmet Bridge, Yıldırım said the project is a hybrid with both vertical and horizontal wiring and the towers are not vertical but make the shape of an "A" consisting of two piers connecting in the middle. "Therefore, the bridge has many firsts and features. It is not just a transportation tool, but it also has an identity, a spirit. It is a project with engineering value," Yıldırım said.

Recalling that the bridge has a 217-kilometer-long highway along with the main and access roads following the bridge, Yıldırım said: "It is sometimes called the Yavuz Sultan Selim Bridge and access road. It is better to call it the Northern Highway. Istanbul's Fatih Sultan Mehmet Bridge is connected to the TEM highway, while the July 15 Martyrs' Bridge is connected to E-5. The Yavuz Sultan Selim Bridge, on the other hand, constitutes Istanbul's outmost highway by going across the northernmost part of the Bosporus." He added that a vehicle entering from Kınalı on the European Side could arrive after passing Sultanbeyli Kurtköy on the Anatolian Side and later continue on to Bursa and İzmir or İzmit via the Osman Gazi Bridge.

Yavuz Sultan Selim Bridge was completed within a record-breaking 27 month time frame, nine months ahead of schedule, according to Transportation, Maritime and Communications Minister Ahmet Arslan, speaking to journalists last weekend. The project is first of its kind completed in such a time frame and could break a world record, according to Arslan.

Continuing by saying that the bridge was constructed in accordance with the build-operate-transfer model without the use of any public resources, Arslan said it would reduce fossil fuel emissions by easing Istanbul's heavy traffic burden as well as environmental problems.

Pointing out that the process has been closely monitored by the Ministry of Forestry and Water Affairs and the General Directorate of Forestry, Arslan said nearly 300,000 trees were transferred to other places and 2.5 million trees have already been planted in their place. He also added that 10,000 trees have been planted daily, along with 5.1 million trees which will be planted along the route.

The rail system crossing the bridge will run from Edirne to İzmit, will be integrated into the Marmaray and Istanbul Metro and will also connect Istanbul Atatürk International Airport, Sabiha Gökçen International Airport and the third airport, also currently under construction.
RELATED TOPICS