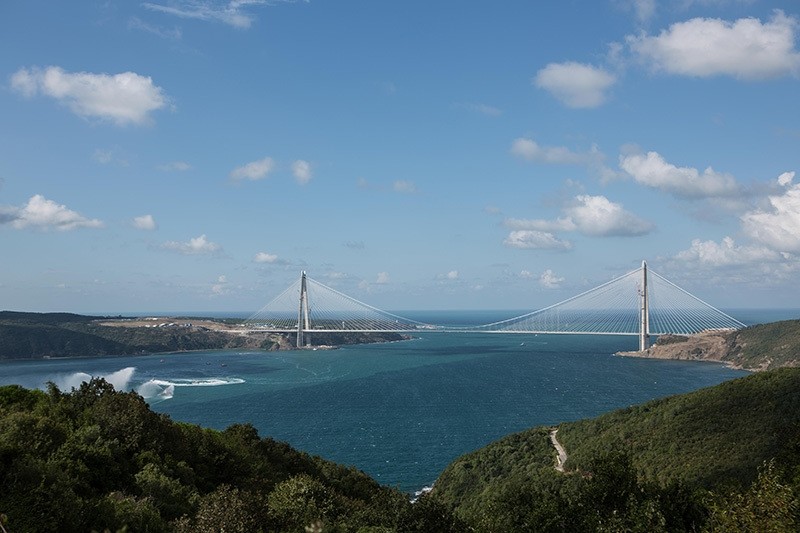 The opening ceremony of the Yavuz Sultan Selim Bridge connecting Europe and Asia for the third time, was realized Friday with the participation of President Erdoğan, Prime Minister Yıldırım as well as many other high-level international guests

The Yavuz Sultan Selim Bridge, Istanbul's third bridge linking the European and Asian sides of Istanbul, opened on Friday in a ceremony that was attended by President Recep Tayyip Erdoğan and Prime Minister Binali Yıldırım.

The bridge, built above the northern part of the Bosporus Strait, was named after 16th century Ottoman Sultan Selim I, whose rule marked the expansion of the empire's burgeoning world power in the Middle East.

We are connecting continents," Erdoğan said in his speech. "We are celebrating together and we are very proud of it. The nation deserves this. This is a great and joyful day."

Erdoğan, who along with Yıldırım was among the first to cross the bridge, said it would "pioneer" further projects, such as a canal linking the Black Sea and the Sea of Marmara and another Europe-Asia bridge at the Dardanelles.

The president used the occasion to attack Daesh, which killed 54 people in a suicide bombing at a wedding in the southern city of Gaziantep on Aug. 20.

"Do not regard what is written on their so-called flag," he said, referring to the terror group's white-on-black standard that carries the names of Allah and the Prophet Muhammed.

"Those terrorists cannot be Muslim. They are manipulating children by using them as suicide bombers. When asked, they claim that they are acting in the name of Islam. However, they have nothing to do with Islam. There is absolutely no room for such cruelty in our religion, because our religion is a religion of peace." The president said he would visit Gaziantep on Sunday.

Referring to the Battle of Malazgirt on Aug. 26, 1071, which saw the Seljuk Turks defeat a Byzantine army and open the way for Turkish domination in Anatolia, Erdoğan added: "We have been here for a thousand years. The most significant qualification of our ancient history is that we would overcome every challenge by acting in unity as a nation."

"It will not only serve to Istanbul but also serve to every journey in the historic Silk Road, starting from the Far East, ending in Europe and bringing civilizations together by connecting people," PM Yıldırım also told a crowd of dignitaries.

Named after Selim I, the bridge accompanies the July 15 Marytrs' Bridge -- previously the Bosphorus Bridge -- and the Fatih Sultan Mehmet Bridge in crossing the Bosphorus.

All trucks and heavy-duty vehicles will be directed to the bridge to ease traffic on the other bridges, as well as cut congestion and pollution in Istanbul.

Turkey's government has guaranteed operators that 135,000 automobiles will use the bridge each day. The fee for automobiles going from the European to the Asian side will be TL 9.90 ($3.40).

There will be no charge for passage from the Asian to the European side.

While last preparations for the opening of the bridge were being made, noting that the bridge was a magnificent work of art, Yıldırım said in his visit to the bridge in early August: "It is not just a bridge. It has eight lanes of motorway and two lanes of railway in the middle. Consisting of 10 lanes in total, it is the broadest spanning suspension bridge in the world. It is also the highest suspension bridge in the world, with the world's highest tower at a height of 322 meters." Pointing out that its design was different than that of the 15 July Martyrs' Bridge and the Fatih Sultan Mehmet Bridge, Yıldırım said the project is a hybrid with both vertical and horizontal wiring and the towers are not vertical but make the shape of an "A" consisting of two piers connecting in the middle. "Therefore, the bridge has many firsts and features. It is not just a transportation tool, but it also has an identity, a spirit. It is a project with engineering value," Yıldırım said.

Recalling that the bridge has a 217-kilometer-long highway along with the main and access roads following the bridge, Yıldırım said: "It is sometimes called the Yavuz Sultan Selim Bridge and access road. It is better to call it the Northern Highway. Istanbul's Fatih Sultan Mehmet Bridge is connected to the TEM highway, while the July 15 Martyrs' Bridge is connected to E-5. The Yavuz Sultan Selim Bridge, on the other hand, constitutes Istanbul's outmost highway by going across the northernmost part of the Bosporus." He added that a vehicle entering from Kınalı on the European Side could arrive after passing Sultanbeyli Kurtköy on the Anatolian Side and later continue on to Bursa and İzmir or İzmit via the Osman Gazi Bridge.

Yavuz Sultan Selim Bridge was completed within a record-breaking 27 month time frame, nine months ahead of schedule, according to Transportation, Maritime and Communications Minister Ahmet Arslan, speaking to journalists last weekend. The project is first of its kind completed in such a time frame and could break a world record, according to Arslan.

Continuing by saying that the bridge was constructed in accordance with the build-operate-transfer model without the use of any public resources, Arslan said it would reduce fossil fuel emissions by easing Istanbul's heavy traffic burden as well as environmental problems.

Pointing out that the process has been closely monitored by the Ministry of Forestry and Water Affairs and the General Directorate of Forestry, Arslan said nearly 300,000 trees were transferred to other places and 2.5 million trees have already been planted in their place. He also added that 10,000 trees have been planted daily, along with 5.1 million trees which will be planted along the route.

In 2015, Turkey raised the bar with the financial closure of seven projects totaling a record $44.7 billion according to data released by the World Bank Group's Private Participation in Infrastructure Database.

The Eurasia tunnel, which is the second underwater project in Istanbul after Marmaray (a railway tunnel underneath the Bosporus Strait that transported about 21 million passengers in the first six months after its inauguration in October 2013), is scheduled to open on Dec.20.

The tunnel will connect the Kazlıçeşme neighborhood on the European side with Göztepe on the mega city's Asian side and cut travel time between the two congested areas to 15 minutes. Expanding current motorways and constructing connecting roads should also be completed this year.

Istanbul's third airport is under construction in the Arnavutkoy district of Istanbul, on the city's European side.

Kanal Istanbul is an artificial sea route that will be built parallel to the Bosporus and will connect the Black Sea to the Sea of Marmara.

The canal will provide relief to shipping traffic, particularly oil tanker traffic, passing through the Bosporus. The canal has a designed capacity of 160 vessels a day and is scheduled to be completed by 2023 at a cost of $15 billion.

The center is aimed at developing the conditions required for Istanbul to rank among the leading financial centers of the world. The $2.6 billion project is integral to Turkey's plan to make its economy one of the world's 10 largest.