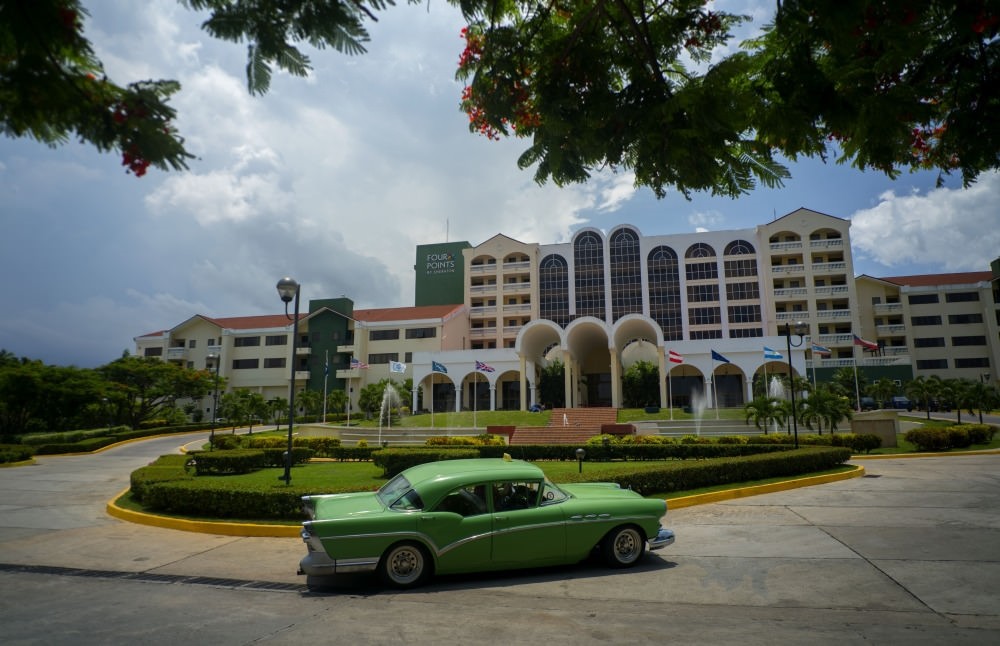 A vintage car passes in front of the Four Points by Sheraton hotel in Havana, Cuba. American hotel giant Starwood has begun managing this hotel owned by the Cuban military.
by Associated Press Sep 10, 2016 12:00 am
At the height of Cuba's post-Soviet economic crisis, a man with the obscure title of city historian began transforming Havana's crumbling historic center block by block, polishing stone facades, replacing broken stained glass and repairing potholed streets. Over a quarter century, Eusebio Leal turned Old Havana into a painstakingly restored colonial jewel, a tourist draw that brings in more than $170 million a year, according to the most recent available figures. His office became a center of power with unprecedented budgetary freedom from the island's communist central government. That independence is gone. Last month, the Cuban military took over the business operations of Leal's City Historian's Office, absorbing them into a business empire that has grown dramatically since the declaration of detente between the U.S. and Cuba on Dec. 17, 2014.

The military's long-standing business wing, GAESA, assumed a higher profile after Gen. Raul Castro became president in 2008, positioning the armed forces as perhaps the prime beneficiary of a post-detente boom in tourism. Gaviota, the military's tourism arm, is in the midst of a hotel building spree that outpaces projects under control of nominally civilian agencies like the Ministry of Tourism. The military-run Mariel port west of Havana has seen double-digit growth fueled largely by demand in the tourism sector. The armed forces this year took over the bank that does business with foreign companies, assuming control of most of Cuba's day-to-day international financial transactions, according to a bank official.

"GAESA is wisely investing in the more international - and more lucrative - segments of the Cuban economy. This gives the military technocrats a strong stake in a more outwardly oriented and internationally competitive Cuba deeply integrated into global markets," said Richard Feinberg, author of "Open for Business: The New Cuban Economy."

Castro has never publicly explained his reasoning for giving so much economic power to the military, but the armed forces are widely seen in Cuba as efficient, fast-moving and relatively unscathed by the low-level payoffs and pilferage that plague so much of the government. Economic disruption also is viewed as a crucial national security issue while the government slowly loosens its once-total hold on economic activity and renews ties with its former Cold War enemy 90 miles to the north.
RELATED TOPICS