DEİK's Vardan: We left behind 10 years on Turkey's EU accession talks; the process continues at a slow pace 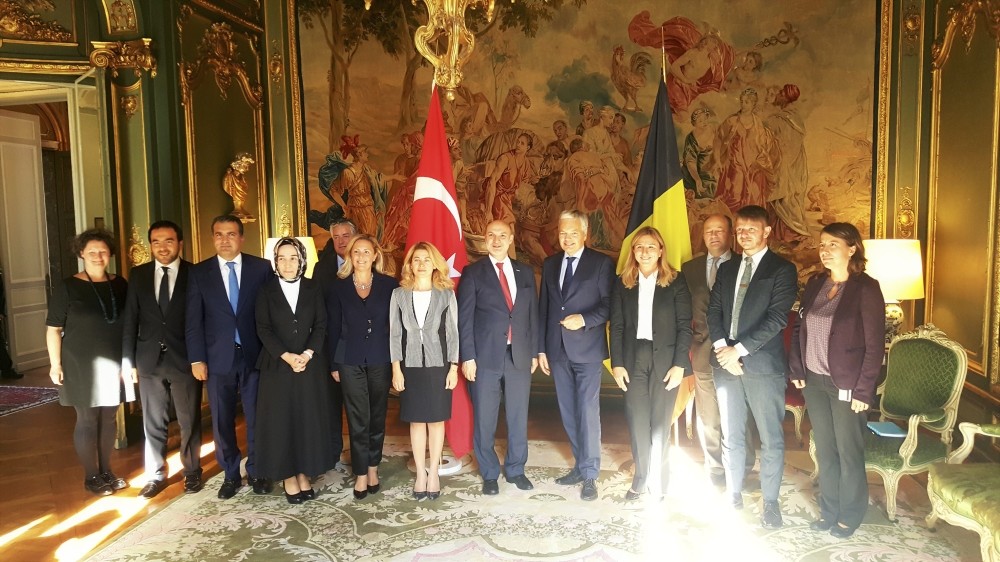 On DEİK's increased contacts at EU's political capital Brussels, Ömer Cihad Vardan, the President of DEİK says the accession talks are not on desired level

"The Turkish business world has always been one of the most important supporters of Turkey's EU membership process, especially during the Customs Union process in 1996 and official start of the membership negotiations back in 2004. Last year we have left behind 10 years on accession talks and the process continues at a relatively slow pace and not reached on a desired level. Turkish citizens and business people are still not able to enjoy visa-free travel to EU Member States and some issues awaiting immediate solutions such as the potential update on Turkey-EU Customs Union, Turkey's integration to the Transatlantic Trade and Investment Partnership (TTIP) talks, deepening of economic relations and recently the refugee crisis".

DEİK through its 37 Business Councils stretched over Europe closely monitors Turkey's relations with the EU and the issues related to the accession process from a business perspective. DEİK's President Vardan says, the EU is an important economic partner to Turkey as more than half of its foreign trade is done with the European countries.

During a three-day long visit to the EU's political enter Brussels on Sept. 26-28, DEİK's Delegation contacted to 20 different persons and institutions. The Delegation was led by DEİK President Vardan, accompanied by DEİK's Communication Committee Members Ebru Özdemir, Murat Özyeğin, Özlem Gökçe, Hatice Karahan and YASED's Secretary General Özlem Özyiğit. The exchange of views has focused on the state of play of the Turkish economy after the failed coup attempt, the political situation as well as the way forward.

DEİK's Delegation hold meetings with senior officials of the European Commission and the European External Action Services (EEAS). The group met with MEPs Kati Piri, Parliament's Turkey Rapporteur on Turkey as well as Marietje Schaake. Two separate roundtable discussions have been organized, one with Bruegel, one of world's leading economic think-tank; the other at the European Parliament in cooperation with 'Friends of Turkey Group in the European Parliament'. The Delegation also came together with Didier Reynders, Belgian Deputy Prime Minister and Minister of Foreign Affairs, as well as with representatives of Belgian business circles.

Murat Özyeğin, Chair at DEİK/Turkey-the Netherlands Business Council said: "Brussels seems to be satisfied with the unity which emerged following the July 15 failed coup attempt and they want this atmosphere to continue". Özlem Gökçe, Chair at DEİK/Turkey-Belgium Business Council points to the importance of economic relations between Turkey and the EU: "Obviously business communities on both side ask for more enhanced economic ties between Turkey and the EU. Partnerships on third countries show a great potential on that". Hatice Karahan, DEİK's Advisor and Member of the Committee says: "Moody's decision to downgrade Turkey's credit rating was one of the most popular questions we have faced during our visit to Brussels. We tried to explain that to downgrade to a speculative level also contains speculation within itself". Özlem Özyiğit, Secretary General at YASED adds: "we tried to explain that the economic reform agenda in Turkey still viable in order to secure foreign investors' confidence to Turkey".

DEİK's recent work on EU is not only limited to Brussels visit too. DEİK's President and Board Members also participated to the luncheon organized in Ankara by the Slovak Embassy to Turkey, holding the European Council Term Presidency on Sept. 29. The luncheon brough together 27 Ambassadors of EU Member States with DEİK's Delegation. On Oct. 4, DEİK also hosted COELA (the Working Party on Enlargement and Countries Negotiating Accession to the EU) in İstanbul. Following the lunch, members of COELA came together with representatives of Turkish business community (DEİK, MÜSİAD, TİM, TÜSİAD and İKV) and discussed recent developments on Turkey-EU relations. Chair at DEİK/Turkey-Slovakia Business Council, İsmet Güral, also participated both gatherings.
RELATED TOPICS