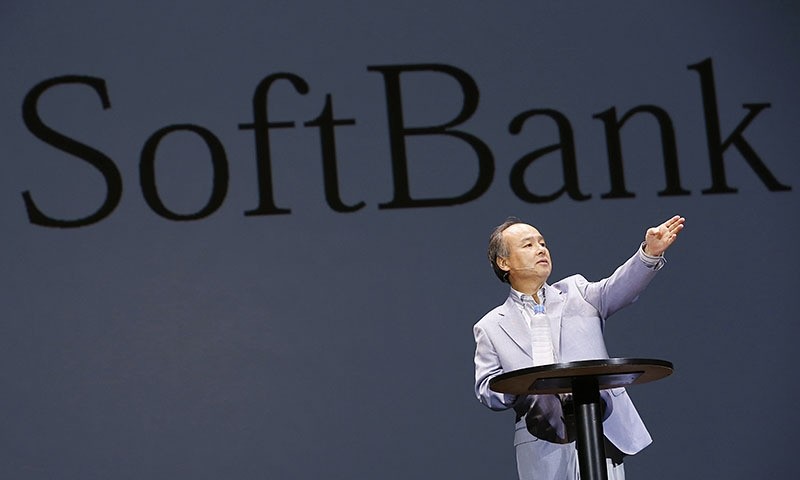 Softbank Corp. Chief Executive and founder Masayoshi Son attends a press conference on the sales launch of its humanoid robot Pepper in Maihama, near Tokyo. (AP Archive Photo)
by Oct 14, 2016 12:00 am
Japanese mobile carrier SoftBank said Friday it hoped to raise as much as $100 billion for a new technology investment fund it has set up in partnership with Saudi Arabia.

The company said it would invest about $25 billion in the SoftBank Vision Fund over the next five years, while the Saudi public investment fund will "consider investing in the fund and becoming the lead investment partner".

The Saudi contribution could reach $45 billion, it said of the non-binding agreement.

SoftBank also pointed to unidentified "large global investors" that may also join in the fund, which is designed to invest in promising technology firms.

"The overall potential size of the fund can go up to $100 billion," it said in statement.

"SoftBank has a proven track record of investment successes. They are looking for another Alibaba," Hideki Yasuda, an analyst at Ace Research Institute, told Bloomberg News.

Flamboyant SoftBank founder Masayoshi Son has led the firm on a string of acquisitions big and small, with many showing themselves to be ahead of their time, including the firm's early investment in Alibaba, China's equivalent to eBay.

It reaped huge profits from a partial sale of its stake in Alibaba, while in June it sold Finnish game-maker Supercell Oy, creator of "Clash of Clans", to Chinese Internet giant Tencent for $8.6 billion.

But its US mobile unit Sprint is still unprofitable and some analysts have questioned SoftBank's most recent high-profile deal - the $32-billion purchases of British iPhone chip designer ARM Holdings.

There have been growing concerns about its balance sheet with SoftBank carrying more than $100 billion in debt, largely tied to its frenzied string of acquisitions.