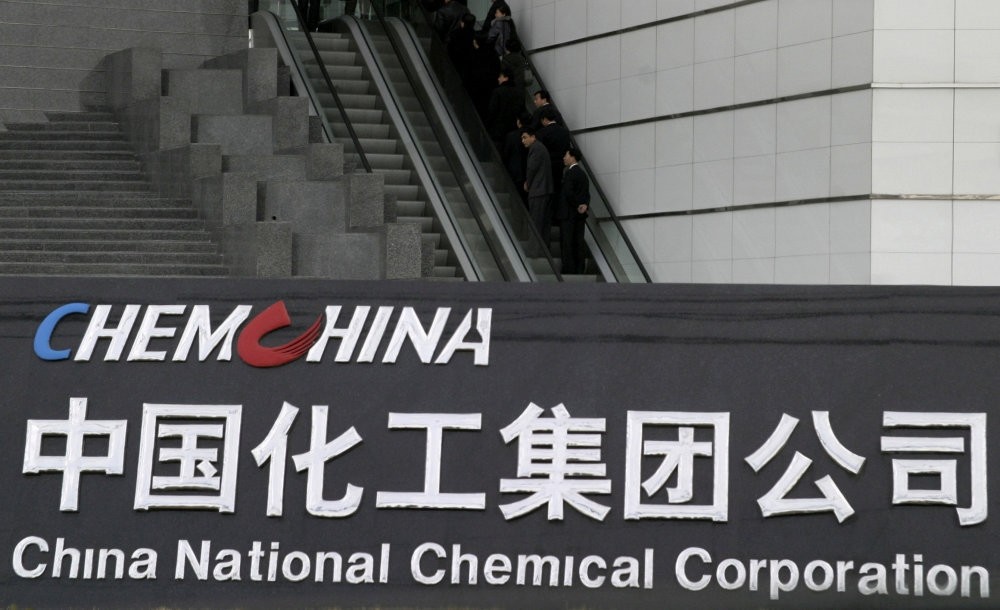 Beijing is planning a mega-merger of chemicals giants Sinochem and China National Chemical Corp. in a massive deal that would reshape the chemicals industry, Bloomberg News reported

Chinese state-owned chemical companies Sinochem Group and ChemChina are in discussions about a possible merger to create a chemicals, fertiliser and oil giant with almost $100 billion in annual revenue, three sources familiar with the matter said. The deal has been proposed by China's central government as part of its efforts to slash the number of state-owned companies and create larger, more competitive global industry players, said the sources. Top management of the two firms held a meeting earlier this week to discuss a potential merger, said one source directly briefed on the matter.

"The government has given the mandate to let Sinochem lead in this potential merger with ChemChina," said the source.A second source familiar with the matter said both firms have started due diligence work looking into each other's financial details and business segments. When asked about a potential merger, a ChemChina spokesperson said: "There is no such thing."

A Sinochem spokesman said he was not aware of the discussions. China's State-owned Assets Supervision and Administration Commission (SASAC), which oversees state-owned enterprises, did not comment when asked about the talks. Shares in the companies' listed subsidiaries jumped on the news, with Sinochem International up 10 percent for its biggest one-day rally in a year and Sinofert on track for its best daily gain since December. While still at an early stage, the talks come as China

National Chemicals Corp, as ChemChina is officially known, finalises a $43 billion takeover of Swiss pesticides and seed group Syngenta. That deal would be China's largest-ever foreign investment. The European Union is expected to rule on the deal by Oct. 28.

It was not clear why the discussions were happening before the ChemChina-Syngenta deal had been finalised, or whether it would create further problems with anti-trust regulators around the world which have been looking at that deal. Beijing may have initiated the talks to create a stronger, larger player to make it easier to absorb a world-class company like Syngenta, said the source directly briefed on the matter.

Backing from Sinochem might help ChemChina finance its Syngenta deal on more favourable terms, the source said. ChemChina faces a $3 billion break fee if its Syngenta deal does not proceed. If approved, the ChemChina-Sinochem merger would be among the largest between two Chinese state-owned enterprises, following similar marriages that created shipping giant China Cosco Shipping Corp, train maker CNR-CSR and more recently, the tie-up between Baosteel Group and Wuhan Steel.

Combining the two companies, which make everything from refined oil products to latex gloves and insecticides, would propel it into the top echelons of the competitive global chemicals, fertiliser and oil industries. Based on 2015 annual reports, revenues of the combined group would comfortably eclipse Germany's BASF, the world's

"It really does align nicely the government's priority to reduce the number of SOEs (state-owned enterprises)," Meidan said.

A merger would fit in with President Xi Jinping's years-long push to shrink the number of centrally-controlled state-owned enterprises, which number more than 100. In Sinochem's case, it is larger than ChemChina, but it needs a partner in the long term if it wants to expand in the global market and extend beyond roots that go back almost 70 years in oil and chemical trading, experts who know the companies said.

Sinochem has seen growth in the key energy business stagnate with increasing domestic competition in trading from the likes of state oil trader Unipec and Chinaoil, while its overseas oil and gas assets have struggled amid prolonged low oil prices.

"Sinochem is generally light on assets, while ChemChina is a more of a manufacturer," he said.