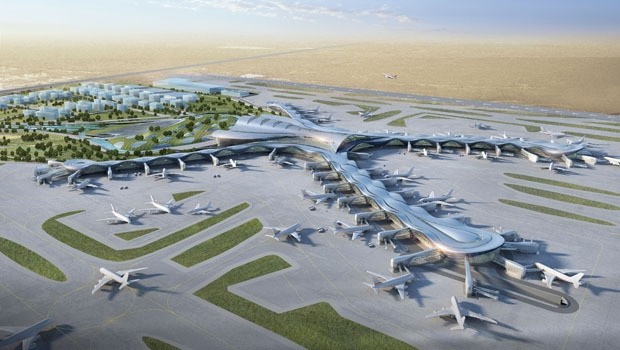 The new terminal of the Abu Dhabi International Airport is being constructed by Turkeyu2019s TAV. Turkish companies eye more construction projects in the Gulf.
by Hazal Ateş Nov 02, 2016 12:00 am

A total of 250 Turkish participants attended the second Turkey-GCC Business and Investment Forum to discuss construction projects worth $1 trillion in Gulf countries as businessmen from Turkey, Bahrain, Qatar, Saudi Arabia and the UAE gathered in Bahrain

Turkish businesspeople from the Union of Chambers and Commodity Exchanges of Turkey (TOBB) arrived in Bahrain yesterday, accompanied by Customs and Trade Minister Bülent Tüfenkçi, for the second Turkey-GCC Business and Investment Forum on "Strategic Economic Partnership". The forum hosts 800 delegates from Bahrain, Qatar, Saudi Arabia and the Arab states.

A total of 250 Turkish participants attended the forum to discuss construction projects worth $1 trillion with members of the Gulf Cooperation Council (GCC), including the United Arab Emirates (UAE) which holds $428 billion in the projects, and Saudi Arabia which has invested $417 billion. Turkey's major construction firms continued talks with Arab states regarding potential investments in the project. Turkish investments are considered a "safe haven" by Gulf countries in the wake of the controversial Justice Against Sponsors of Terrorism Act (JASTA) in the U.S., which threatens Arab investments in the West.

In late September, the U.S. Congress voted overwhelmingly to override U.S. President Barack Obama's veto of JASTA, an act which gives families of Sept. 11 victims the right to sue Saudi Arabia for their alleged role in the Sept. 11, 2001 attacks. Fifteen of the 19 hijackers were Saudi citizens but no link to the Saudi government has ever been proven. The Kingdom denies any ties with the terrorists.

During the forum, Minister Tüfenkçi stressed that the meeting of 800 businesspeople is crucial for the strengthening of commercial and economic relations between Turkey and the Arab states, adding that the forum establishes a new investment environment centered around solidarity. The minister also emphasized the importance of a free trade agreement (FTA) between Turkey and Gulf countries, saying it would allow trade volume between the countries to increase. Tüfenkçi also suggested that commercial relations could have a positive impact on trade volume, pointing to potential investments with third-party countries to be made alongside the Arab states. The minister said that Turkey is ready to share its experience collectively and make every effort to eliminate any obstacles they may face.

Noting that the Customs and Trade Ministry wishes to establish closer partnerships with the Gulf countries, TOBB President Rıfat Hisarcıklıoğlu said that the potential trade partnerships have great potential, calling an FTA a concrete step towards real profits and a "win-win" for both sides. Hisarcıklıoğlu pointed out that Turkey and the Arab states have the potential to form a giant economy with a populace of 133 million and total revenue of $2.5 trillion, urging both sides to enact the preferential trade agreement between Islamic countries.

Abdullatif Al Zayani, secretary general of the GCC, said they are proud of the improvement of economic relations with Turkey and open to more, stressing that vital fields such as tourism should be the focus. Pointing out that mutual trade and investment opportunities should be evaluated in the forum in addition to joint projects, Al Zayani said cooperation which will provide added economic value to both sides should be discussed. He noted that the forum could create new opportunities and a positive picture for both sides, namely in privatization policies or stock exchange.

Ali Thunyan Al-Ghanim, president of the Federation of GCC Chambers, said Turkey's regional exports have climbed to about $15 billion. Suggesting that Turkey might be a safe haven for the investments of Gulf countries by providing support to the private sector and increasing commercial relations, Al-Ghanim noted that along with bilateral relations, overall relations would be further improved. He stated that the participation of young entrepreneurs and female elements is important. "Opportunities can be assessed with a company which will be established between Turkey and the GCC. The utilization of the Turkish lands will be of grave importance," Al-Ghanim added.

Khalid Al Moayyed, president of the Bahrain Chamber of Commerce and Industry, said that they gathered in the forum in order to establish a strategic partnership and expand relations. Noting the many agenda topics, including project financing, development of health tourism, diversification of energy resources, and investments in food and drinking water safety, Al Moayyed said that Bahrain and the GCC wish to further develop relations, calling for closer cooperation on all sides.
RELATED TOPICS