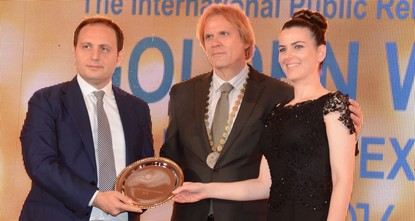 The Gaziosmanpau015fa Municipality in Istanbul also received an IPRA Golden World Award for its accomplishments in public service.
by daily sabah Nov 11, 2016 12:00 am

Turkey took home the "Golden World Award for Excellence 2016" in the field of public relations, which was distributed by the International Public Relations Association (IPRA) in the award ceremony held in Doha, Qatar on Nov. 5.

Atakan Yılmaz, the Public Relations Director of Istanbul Metropolitan Municipality and his delegates attended the ceremony.

The IMM's entry was a project called "Accessible Tourism, Abled Istanbul Replicas" which aspired to enable visually-impaired individuals to feel cultural and historical structures via replicas, without the need of anyone's help. Within the scope of the project, the replicas of Topkapı Palace, the Chora Church, Hagia Sophia and the Panorama 1453 Historical Museum were made available to visually-impaired people.

The IMM said that during the making of these replicas of historical and cultural structures the PR team consulted visualy-impaired citizens and employees.

Made out of wear-resistant and eco-friendly materials, the project is the first of its kind.

The IPRA Golden World Awards for Excellence is the world's most prestigious PR awards scheme, and it celebrates public relations accomplishments in various categories.

The IPRA was founded 60 years ago in London on 1 May 1955, with the objective to raise the standards of public relations practice worldwide. The GWA which was launched in 1990, is coveted by PR programmers across the globe.

Representing individual professionals, not agencies or companies, the IPRA recognized by the UN and is an international non-governmental organization. It has also been granted consultative status by the Economic and Social Council (ECOSOC).