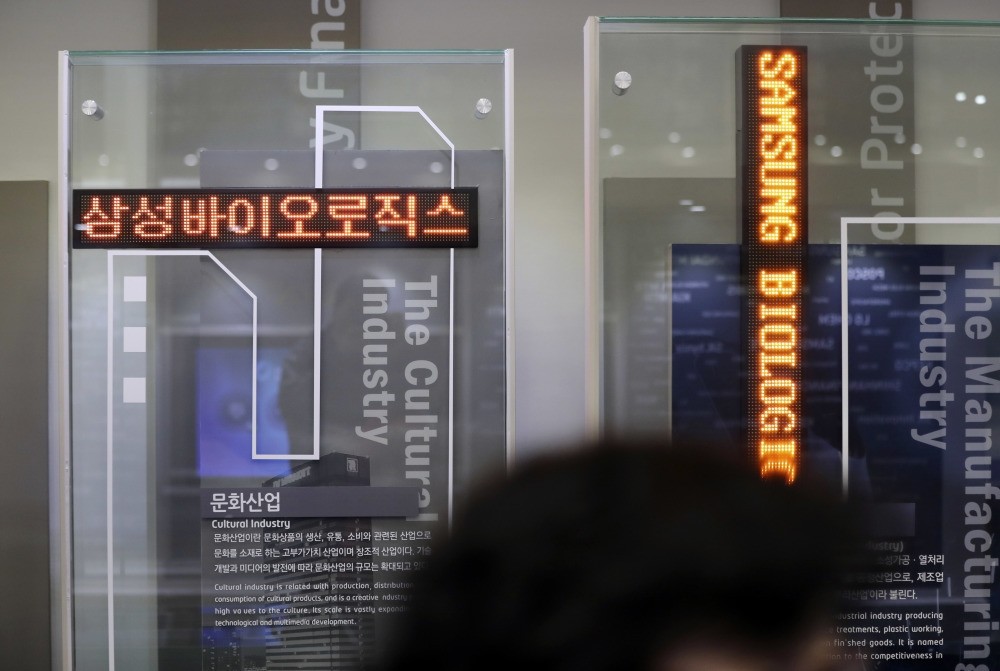 Korean and English names of Samsung Biologics Co. are displayed at the Korea Exchange in Seoul.
by Nov 11, 2016 12:00 am

The South Korean giant is looking to biotech to be a new core business on par with its semiconductor manufacturing. It has included bio tech and health care in the five businesses it named as future growth engines

Shares in Samsung's drug-making unit soared almost 6 percent on their market debut yesterday, after one of South Korea's biggest ever initial public offerings that raised nearly $2 billion. Samsung Biologics, a contract manufacturer of biotech drugs for global pharmaceutical firms, surged 5.88 percent from its IPO price to close at 144,000 won ($125) in Seoul, putting its total value at about 9.5 trillion won.

The rally came as investors snapped up pharmaceutical shares after Donald Trump's victory in the U.S. presidential election, during which rival Hillary Clinton had said she would move to lower drugs prices. The pharma sector rallied 8 percent in Seoul.

Samsung Biologics was set up by the South Korean conglomerate in 2011 as part of a multi-billion-dollar drive to find new growth avenues including healthcare and green energy over the next decade.

The highly anticipated IPO is the second largest in South Korea's history, raising 2.25 trillion won ($1.96 billion), which the unit says will be used to expand production capacity and invest in research and development. The firm makes biopharmaceutical drugs for major firms including Bristol-Myers Squibb and Roche at plants near Seoul. Bio-drugs, unlike chemically synthesized drugs, are made of organic, live substances such as plant or animal cells and are more complex to research and manufacture. Construction unit Samsung C&T and the flagship Samsung Electronics together hold a 75 percent stake in Samsung Biologics after the share sale.

The firm has been in the red for years with a net loss of 75.7 billion won in 2015 as it invested heavily in its two existing plants and a new facility slated to open in two years.

Completion of the third plant is expected to make the company the world's top contract drug manufacturer in terms of production capacity, said Woo Chang-Hee, analyst at IBK Investment & Securities. The global biopharmaceutical market is expected to grow to $488 billion by 2025, compared with $164 billion in 2012, due to the world's ageing population, Woo said.
RELATED TOPICS