Asia-Pacific summit closes with call to work for free trade 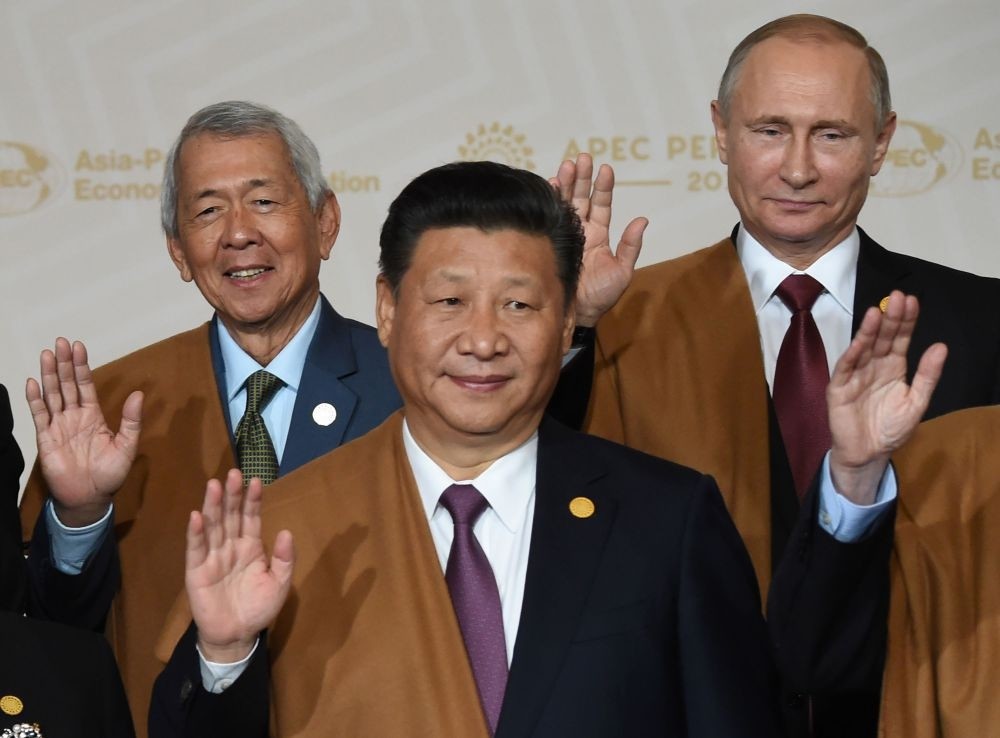 (L to R) Philippine Foreign Secretary Perfecto Yasay, Chinau2019s Xi Jinping and Russiau2019s Putin take part in the traditional u201cfamily photou201d on the final day of the Asia-Pacific Economic Cooperation Summit at the Lima Convention Centre in Lima.
by Associated Press Nov 22, 2016 12:00 am

Leaders of 21 Asia-Pacific nations ended their annual summit with a call to resist protectionism amid signs of increased free-trade skepticism, highlighted by the victory of Donald Trump in the U.S. election

The Asia Pacific Economic Cooperation forum closed with a joint pledge to work toward a sweeping new free trade agreement that would include all 21 members as a path to "sustainable, balanced and inclusive growth," despite the political climate.

"We reaffirm our commitment to keep our markets open and to fight against all forms of protectionism," the leaders of the APEC nations said in a joint statement.

APEC noted the "rising skepticism over trade" amid an uneven recovery since the financial crisis and said that "the benefits of trade and open markets need to be communicated to the wider public more effectively, emphasizing how trade promotes innovation, employment and higher living standards."

Speaking to journalists at the conclusion of the summit, Peruvian President Pedro Pablo Kuczynski said the main obstacle to free trade agreements in Asia and around the world is the frustration felt by those left behind by globalization.

"Protectionism in reality is a reflection of tough economic conditions," said Kuczynski, the meeting's host.

Referring to Britain's vote to leave the European Union and Trump's election win in the U.S., he said those results highlighted the backlash against globalization in former industrial regions in the U.S. and Britain that contrasts with support for trade in more-prosperous urban areas and developing countries.

"This is an important point in recent economic history because of the outcome of various elections in very important countries that have reflected an anti-trade, anti-openness feeling," he said.

This was the last international summit for U.S. President Barack Obama and he had been expected to promote the Trans-Pacific Partnership pact, a 12-nation trade deal. But he is no longer expected to seek ratification by Congress before he leaves office because of the election victory by Trump, who called the agreement a "disaster" for jobs.

Obama told reporters that the way to address income inequality and to create jobs is through crafting trade policy and agreements like the TPP in ways that will increase exports to the Pacific Rim countries that make up a third of the world's population.

"When it comes to trade, I believe the answer is not to pull back," he said at his last overseas news conference. "The answer is to do trade right, making sure it has strong labor standards, strong environmental standards - that it addresses ways in which workers and ordinary people can benefit rather than be harmed by global trade."

Questions about Trump trailed Obama throughout trip as anxious world leaders quizzed him on Trump's stances on key issues like trade, foreign policy and the NATO alliance. On his final day in Peru, Obama sought to reassure the leaders gathered here that their longstanding ties with the U.S. wouldn't falter under Trump.

Leaders of other nations said at the APEC meeting that they might seek to modify the TPP deal to make it more appealing to the incoming president or seek to implement it without the U.S. But the statement issued at the close of the summit said the organization would also work toward adoption of a broader 21-nation pact favored by the Chinese government known as the Free Trade Area of the Asia Pacific. Canadian Prime Minister Justin Trudeau said he is keeping an open mind about Trump, who has threatened to tear up the North American Free Trade Agreement between his country, the U.S. and Mexico. The APEC statement also said the members would adhere to the carbon reduction goals set in Paris last year to address climate change, which they called a threat to food security and security.
RELATED TOPICS