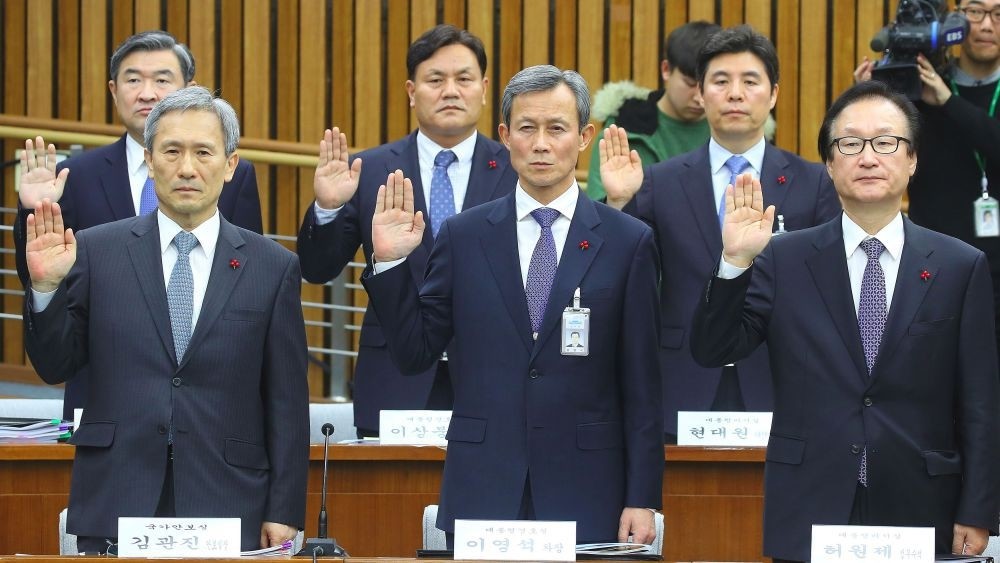 National Security Office chief Kim Kwan-Jin (L) and other presidential aides take an oath during a hearing on South Korean President Park Geun-Hyeu2019s corruption scandal at the National Assembly in Seoul, Monday.
by Dec 06, 2016 12:00 am
South Korean lawmakers yesterday kicked off an unprecedented series of hearings that will see the country's business elite grilled over a corruption scandal engulfing impeachment-threatened President Park Geun-Hye.

The powerful heads of family-run conglomerates such as Samsung and Hyundai will be among those testifying before a parliamentary investigation ahead of an impeachment vote to remove the president on Friday.

The hearings opened on the back of a series of weekly mass demonstrations in Seoul that have seen millions of people take to the streets to call for Park's ouster.

Choi, who has been indicted on charges of coercion and abuse of power, is accused of syphoning some of the donated funds for personal use. She denies all criminal charges.

Choi is set to appear at the televised hearings on Wednesday, marking the first time she will answer questions in public on her role in the scandal.

Tuesday's testimony will be devoted to interrogating the corporate bigwigs, including Samsung group scion Lee Jae-Yong, Hyundai chairman Chung Mong-Koo and seven heads of other conglomerates including LG, Lotte, Hanjin and CJ.

They are among the wealthiest and most powerful people in the country, but the "Choi-gate" scandal has taken the lid off simmering public resentment over their influence and perceived sense of privilege at a time of slowing economic growth

According to industry sources cited by the largest-circulation newspaper, Chosun Ilbo, many of them have been going through frantic preparations to avoid any public humiliation, holding mock question and answer sessions with aides and memorizing responses to sensitive issues.

Samsung - the South's largest business group - made the biggest contributions of 20 billion won ($17 million) to Choi's foundations, followed by Hyundai, SK, LG and Lotte. Samsung is also accused of separately offering millions of euros to Choi to bankroll her daughter's equestrian training in Germany.

Prosecutors have raided the headquarters of Samsung and other groups for any evidence that they received policy favors in exchange of donations.

President Park will not appear before the hearings, after fierce opposition from her ruling conservative party to the idea of her being called.
RELATED TOPICS