With Dakota denial, outlook for US pipelines turns murky 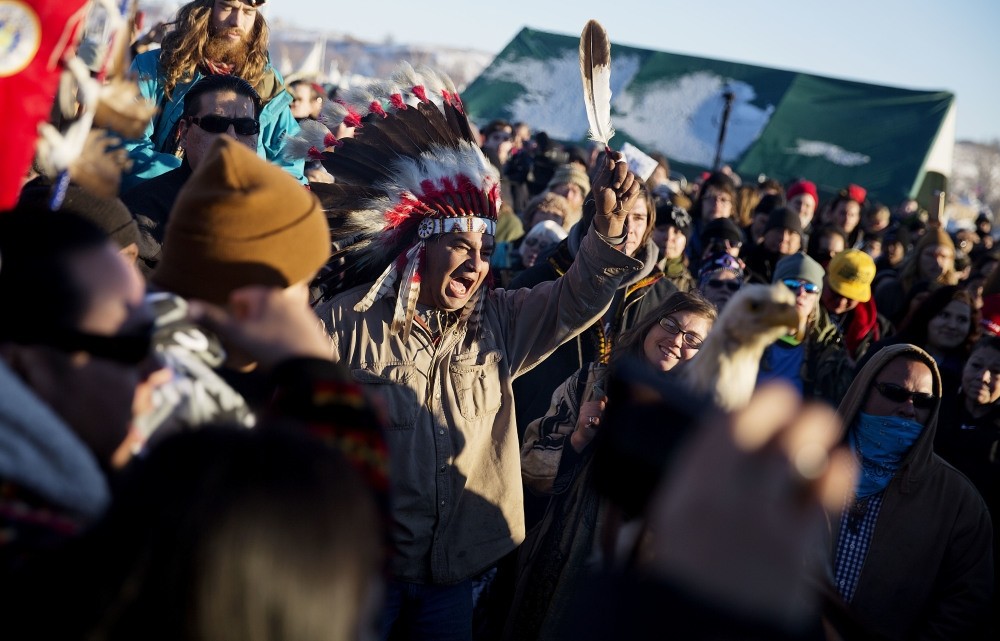 A crowd gathers in celebration at the Oceti Sakowin camp after it was announced that the U.S. Army Corps of Engineers won't grant easement for the Dakota Access oil pipeline in Cannon Ball.
by Dec 06, 2016 12:00 am

While the U.S. bowed to pressure from native groups in denying the pipeline permit, it sets an uncertain precedent for new projects despite President-elect Trump's promise to support energy infrastructure

The U.S. Army's denial of an easement for the Dakota Access Pipeline, after permitting and legal obligations were followed, sets an uncertain precedent for new projects despite President-elect Donald Trump's promise to support energy infrastructure. The decision came after months of protests by the Standing Rock Sioux tribe and others who said the line could desecrate tribal grounds, or a spill could contaminate drinking water. While most of the 1,172-mile (1,885-km) pipeline is complete, Energy Transfer Partners, the line's owner, needed an easement from the U.S. Army Corps of Engineers (USACE) to drill under Lake Oahe. The lake, a water source formed by a dam on the Missouri River, has been the focus of protesters.

The Army's intervention sets an unsettling precedent, analysts and industry groups told Reuters, because Energy Transfer had undergone the necessary environmental reviews and permitting processes to move ahead with construction.

"I think it sends a horrible signal to anyone wanting to invest in a project and I strongly suspect those policies will be discontinued on Jan. 20th," said Brigham McCown, the former

head of the U.S. Pipeline and Hazardous Materials Safety Administration (PHMSA) under George W. Bush, referring to the inauguration of President-elect Donald Trump. Still, the decision to deny the easement tempers some of the optimism pipeline companies assumed following the election of Trump, who is seen as more supportive of oil and gas projects. Energy Transfer Partners said in a statement the decision was politically motivated and it did not intend to reroute the line.

Beyond the federal approval issues, state and local governments have also mobilized against pipelines. Earlier this year, Georgia's state legislature passed a bill to restrict pipeline developments, stopping a gasoline line from Florida to South Carolina from being built. Energy Transfer chief executive Kelcy Warren, a donor to Trump's campaign, said his election was a positive. Last week Trump for the first time voiced support for the Dakota Access project.

level of uncertainty to projects. Oil companies have already been facing growing resistance from environmental groups that have resulted in delays or unanticipated costs.Equipment used for the Dakota Access line has been set on fire, and in October, a group of protesters turned off valves on pipelines transporting oil from Canada to the United States.

Together, those lines had capacity to move some 2.8 million barrels per day of oil.

Energy Transfer has said it expects to lose almost $84 million each month the Dakota Access pipeline is delayed, and that losing shippers could result in its cancellation, according to a court filing.

"I think midstream companies will hope that each project can be decided based on necessary permitting approvals, but there will be increased risk where agencies like USACE are involved,"

said Sandy Fielden, director of research in commodities and energy at Morningstar. While the Standing Rock Sioux have said they would support a rerouting of the line, others, such as the Indigenous Environmental Network (IEN), want it canceled.

"Given Trump's support of the Dakota Access, and the Keystone XL, we remain cautious," said Dallas Goldtooth, a spokesman for IEN.