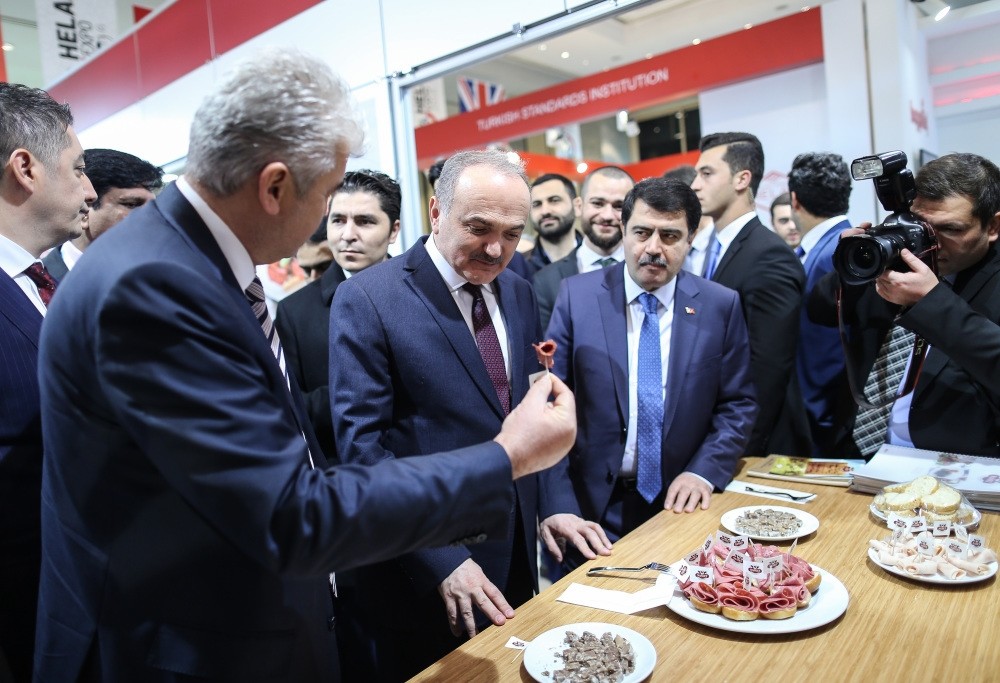 Minister of Science, Industry and Technology, Faruk u00d6zlu00fc, (second from the left), visits the stands in the exhibition area at the World Halal Summit in Istanbul.
by Daily Sabah with AA Dec 17, 2016 12:00 am

The World Halal Summit, organized for the second time under the auspices of the Presidency in Istanbul, addressed a wide variety of topics, including halal food, textile, pharmaceuticals, Islamic finance and halal tourism

To establish a worldwide standard for halal certification, the World Halal Summit, organized under the auspices of the Presidency and in cooperation with the Standards and Metrology Institute for Islamic Countries (SMIIC), brought together high-level speakers from 60 countries, prominent figures in the global halal industry. As part of the summit, held for the second time this year, in Halal Expo 2016 leading enterprises in the halal industry exhibited their products. Moreover, the summit had various conferences on halal food and gastronomy, Islamic finance, halal tourism, halal medicine and pharmaceuticals.

According to International Monetary Fund (IMF) data, the world food and beverage expenditure was $6.7 trillion in 2014 and $1.1 trillion was from the halal food and beverage trade. This figure, which has increased steadily in recent years, is predicted to reach $1.6 trillion by 2020.

Speaking on the second day of the summit, Science, Industry and Technology Minister Faruk Özlü indicated that Turkey is striving to produce solutions for a fundamental problem of Muslims around the world. Minister Özlü said many countries and organizations are now working to prepare, harmonize and document standards on halal certification. "The Standards and Metrology Institute for Islamic Countries (SMIIC) aims to develop trade between its member countries through its work in the field of halal documentation. It will serve the interests of all Islamic countries and Muslims that SMIIC standards will be the only standard in the world. Today, it is not acceptable for Muslim countries, which are close to 25 percent in terms of population, to receive only 10 percent of world trade. Changing this table is our job," he said, adding: "Let's not forget that standards in modern economies are of great importance not only for consumers but also for producers. Developed countries, in particular, determine and apply standards in their own right. It also imposes its own needs and capabilities on other countries as a standard."

Simplifying the process of halal certification

Saying that companies operating with Islamic banks survived the crisis much easier, Kalav said: "The most important factor in this situation is that the system of profit sharing inherent in Islamic banks is not changing from the crisis period, so when the economy falls into an unbalanced situation, when interest rates start to rise rapidly, the banks increase interest rates and cut down money taps. But we saw that there was no such thing as recall in participation banks and that it was more advantageous in terms of businesses because the determined profit rates could not be changed very soon."

In a panel, "Economic Crisis from the Islamic Finance Window," organized within the scope of the World Halal Summit, Islamic Law, Islamic Banking and Financial Adviser Edib Smolo, said that the last financial crisis was the greatest crisis since the Great Depression and that this showed the flaws in the conventional financial system and that there is no single reason or criminal to be pointed out even seven or eight years after the financial crisis.

Smolo pointed out that many problems and many mistakes caused this crisis; some of them are lack of regulation and supervision, an uncontrolled increase in debt, mismanagement of risks and lack of transparency. When looking back at the recent crisis, he said that people used loans for many years, even those who did not need loans for investment purposes. "But then interest rates started to rise again, so they had trouble paying," he said.
RELATED TOPICS