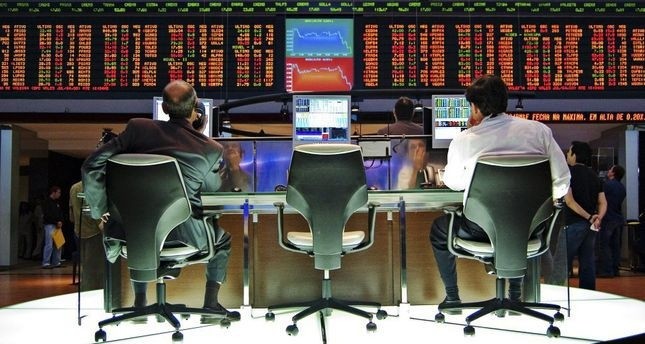 Leaving behind a tumultous year that has staged unpredictable events creating shockwaves in global markets from the U.S. to Europe and Asia, analysts and businesspeople draw a rather predictable and positive picture of 2017

Despite expectations that the new year would start amid uncertainties over possible impacts of rising interest rates, the U.S. dollar and economic policies of the incoming U.S. President Donald Trump, who will assume office on Jan. 20, economists predict 2017 might actually be "a year of opportunities" for investors.

The U.S. presidential election, the U.K.'s "Brexit" referendum on secession from the European Union (EU), geopolitical developments, concerns over global economic growth and policies of central banks dominated the markets in 2016.

These problems were accompanied by an increase in interest rates, the dollar, and problems that became evident in the bond market were among the developments that increased market volatility toward the end of the year.

While global markets were entering the new year with uncertainties created by these developments, economists say that 2017 might be a year of opportunities for investors and these developments might actually work as a blessing in disguise.

2016 was the year of unpredictable developments

Baki Atılal, the head of Turkish Investment Research Department, described 2016 as a year of unpredictable developments for both Turkey and the world.

Speaking about the main economic and political developments at home and abroad this year, and the risks that they created in the markets, Atılal said, "2017 will be a year of opportunities with the elimination of risks."

According to Atılal, markets in 2017 will closely monitor the fall in the EU's growth caused by Brexit, growth rate and interest rates in the U.S., the issue whether Donald Trump's views of international commercial agreements can be realized or not, currency wars among the G20 countries, the discussions of growth in the Chinese economy, the devaluation of the yuan, the effects of global commodity and oil price movements on countries, the entrepreneurial revival in Iran and the reflection of interest rates on countries implementing negative interest rates.

Emphasizing that the EU's integrity will be questioned further after Brexit, Atılal said that political developments will direct the regional economy in 2017. He added that elections to be held in the Netherlands, France, the U.K. and Germany will also keep populism concerns alive in Europe throughout 2017.

"Given the European Central Bank's (ECB) loosening of collaterals in response to the reducing amounts in the bond purchase program, as well as the

economic size of European countries where elections will be held, both the protection of the EU's integrity and the level of euro-dollar parity will continuously remain on the agenda," he said.

Stressing on whether the Chinese economy will maintain its growth rate of 6 to 7 percent in 2017, Atılal said if the Chinese economic growth remains below 6 percent, concerns about global recession might become clear and escalate fluctuations in markets.

He further noted that uncertainties about commodity prices in developing countries and the direction of capital movements based on the Fed's decisions still remain.

"From this point of view, it is possible to say that the risks for growth in 2017 will decline. It is expected that growth will continue to rise in favor of developing countries in 2017," Atılal said.

Pointing out the continuing combination of a strong dollar and high interest rates on U.S. securities may create pressures on global growth; Atılal warned that if the Fed responds to surging inflation rates in the U.S. with more interest rate hikes, it may negatively affect liquidity conditions and emerging markets.

Meanwhile, he said that in Turkey, the referendum on the constitutional amendments, the movement of Turkish lira and steps the Central Bank of Republic of Turkey (CBRT) will take for growth will be important items of its national agenda.

Stating that they expect talks discussing "whether the CBRT will prefer supporting the growth policy or bring inflation under control," to take place because of the interest rates on U.S. securities and the USD/TL movement, Atılal said, "The impacts of government incentives on growth will ease the volatility on the dollar/Turkish lira parity and create a positive trend for investors."

European-based volatilities will outstrip U.S.-based ones in 2017

Özgür Hatipoğlu, Saxo Capital Markets international markets director, drew attention to the fact that a large portion of the world adopts populist policies and as a result, Brexit referendum, which bore a lot of difficulties and troubles, made U.K.'s exit from the EU official, of which the country has never been a full member.

Afterward, the election of Donald Trump, who has an interesting profile, as the next U.S. president, caused Hillary Clinton, who had been grooming herself for the president's office for a long time and would continue to the existing status-quo, to lose the elections.

Stating that 2017 will test how well the global markets can stand against a strong dollar, Hatipoğlu noted, "If the dollar index, which currently moves around 103, reaches 120 as it did in the beginning of 2000s, this movement will cause great losses resulting from exchange rates for many corporations and the U.S. economy will experience significant damage. Even though the Fed will raise interest rates in the face of such a result that will yield a gloomy scenario, the bank will be vigilant about the timing of interest rate hikes. When one observes the Fed's point graphics, it can be seen that the Fed forecasts a more concentrated inflation rate for 2017 and lays the predictions for 2018 on wider periods, which demonstrates that they do not want to promise beforehand in case of a post-interest rate hike."

"Moreover, the global markets will also watch the first 100 days of Trump's administration. How many of the pre-election pledges will be followed and realized, matters. On this the continuation and sustainability of the market movements during the post-election period depends," he said.

Hatipoğlu also added that the economic driver of 2017 will be the Fed and the elections in Europe while the banking sector will also be monitored. Therefore, he claims, the European-based volatilities will outstrip U.S.-based ones this year.