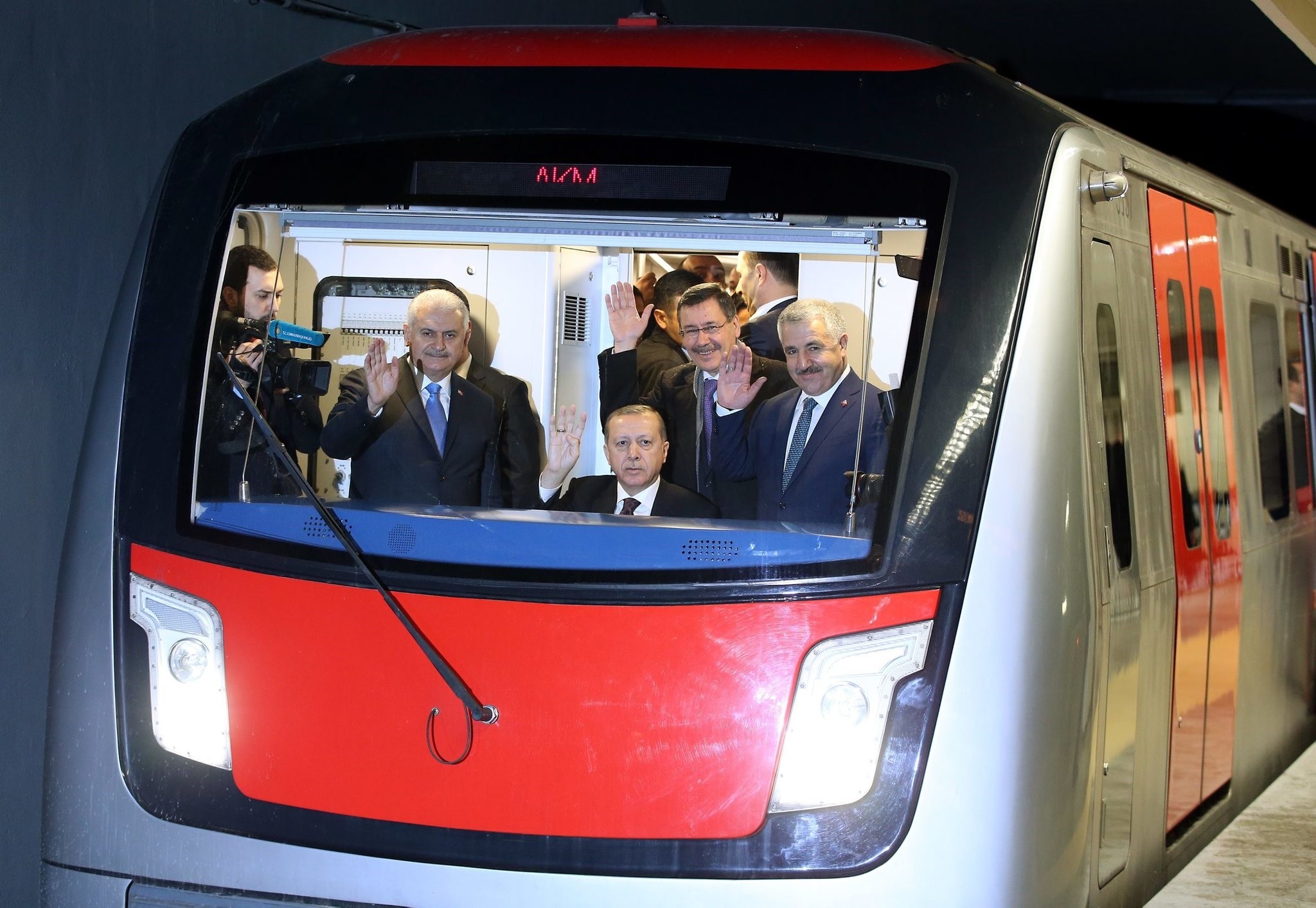 Keçiören Metro line, which cost TL 1 billion, opened in Ankara Thursday. The 9.2 km long metro line, which took almost 13 years to build, will serve 50,000 citizens on a daily basis and ease traffic congestion in the region

The Keçiören metro line in the Turkish capital Ankara, the construction of which lasted for more than a decade due to the sloping land and unplanned construction in the region and which saw its first test drive in August, was opened Thursday with a ceremony attended by President Recep Tayyip Erdoğan and Prime Minister Binali Yıldırım. Expected to ease traffic congestion, the metro line will be toll-free until Jan. 15. With a length of over nine kilometers, the Keçiören metro line had a total cost of TL 1 billion ($276 billion), and was long awaited by Ankara residents. It has nine lines starting in Keçiören and ending at the Atatürk Cultural Center (AKM), a central district in the capital. The metro line will provide service for 50,000 citizens on a daily basis.

The Keçiören Metro line, which connects Keçiören to Kızılay, the central district in Ankara, will ease the traffic congestion to a great extent. Speaking at the opening ceremony of the metro line, President Recep Tayyip Erdoğan pointed out that the cost of the metro line was TL 1 billion, expressing his hope for the completion of a tender process for the other metro line in Ankara which will connect the AKM, the central region in Ankara, to the high-speed train station and Kızılay. He also referred to the time when he resided in the Keçiören district and stressed that he had sympathy with the Keçiören residents, saying he understands very well the citizens' troubles caused by traffic congestion and prolonged construction processes. He was therefore glad that the line was finally opened and started to serve citizens. Erdoğan also touched upon the story of the Keçiören district, which is important for understanding the socio-economic and sociopolitical background of the city and of Turkey. He underscored that the story of Keçiören is the story of the country. Following World War II, Ankara undertook an important responsibility. Those who migrated from Central Anatolia to Ankara first settled in Keçiören, building a city here. Yet, the unplanned construction during those times did not allow for a developed transportation system in the region for a long time. He stressed that the Keçiören metro line solved a very significant transportation problem in Ankara. Erdoğan also announced that the price for the metro line is set to be TL 2.5 but will be free until Jan. 15.

Yıldırım also explained the construction history of the metro line. Normally, urban metro lines are built by the municipalities, as it was the case at the beginning of the construction of the Keçiören Metro. But in order to accelerate the process, the Ministry of Transportation, Maritime Affairs and Communication undertook the responsibility and completed the construction. The prime minister also elaborated on the transportation services created by the government over the last 15 years. "We have increased the length of highways in Turkey to over 25,000 kilometers, which was only 6,100 kilometers previously. We built a brotherhood between the East and the West, between the North and the South." He also highlighted the civic aviation services of the government, which publicized and spread the airports across the country and made it easier for Turkish citizens to use airlines for transportation. Furthermore, Yıldırım underscored the high-speed train lines built over the years. Referring to the completed high-speed train lines connecting Ankara to Eskişehir, and Istanbul and Konya, he announced that the construction work of high-speed lines that will connect the capital to Sivas and İzmir continues. He confirmed that 15 metropolitan cities of Turkey will be connected to Ankara with high-speed train lines and 55 million Turkish citizens will benefit from these lines, once the construction of the others is completed.

Minister of Transportation, Maritime Affairs and Communication, Ahmet Arslan, also delivered a speech at the opening ceremony, and said it is important for the Keçiören Metro line to reach the AKM and to be integrated with the Batıkent rail system in Ankara, but stressed that it is of utmost importance for the metro line to provide uninterrupted service all the way to Kızılay.

Arslan noted that they will hold the bidding of the 3.5-kilometer-long section of the metro line from the AKM to Kızılay in the first quarter of this year, and that after the completion of the project within two years, they will provide the residents of Keçiören with an uninterrupted service all the way to Kızılay.

With a length over 9 km, the Keçiören metro line with a cost of TL 1 billion, which long awaited by Ankara residents, has 9 lines starting in Keçiören and ending in Atatürk Cultural Center (AKM), central district in the capital. The metro line will provide service for 50,000 citizens on a daily basis